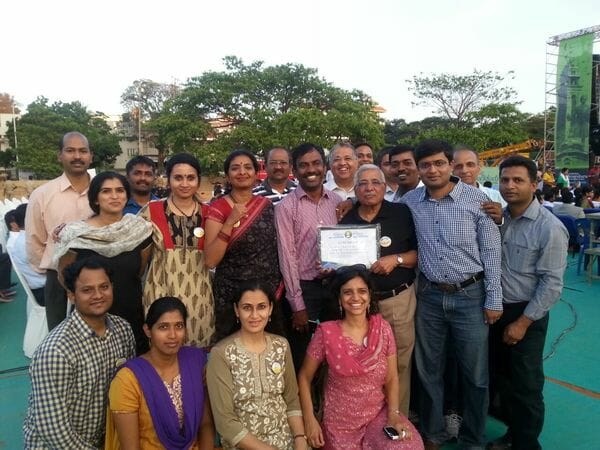 Members of the Whitefield Rising group with the Namma Bengaluru award

We gave no consent and we got awarded for that! You read that right. On March 14th, Whitefield Rising won the Namma Bengaluru Foundation award for disagreeing and sometimes being disagreeable! Strange, isn’t it? Read on to find out why.

We all agree that the state of affairs around us is, putting it mildly, not good. Child rape, sewage in the lakes, garbage on the streets, inequality in our society and many more civic and humanitarian issues. As Ela Bhatt says, this is ‘violence to our own with the consent of state and society’. Ouch!

WE ARE THAT SOCIETY! And by watching on and not acting, WE ARE GIVING OUR CONSENT.

Not anymore… Whitefield Rising provides that platform through which all those who don’t give such consent engage, and find strength in working with others like them. In short, we demonstrate that we ‘care’. Because the line between inaction and indifference is not that far from apathy.

We realise we are not just automatically entitled to what we have, be it a roof over our heads, food in our stomachs or money to send our children to school. We realise we have a responsibility that goes with this privilege. And we heed to it so we can sleep at night.

You may very well ask, “So, what change have you made? We don’t see massive impact?”

This is only a hundredth of our list. Still, we must explain the lack of ‘visible’ difference

Though there are a zillion more issues like the above, the good news is that our efforts aren’t entirely wasted. There appear to be some people in the government who do want to help and have the ‘capability’ to help. Many who want to are simply unable to, because of the system in which they are mired. That deep change is not something that is easy. It can only come when the majority of the citizens, wake up and realise their responsibility to the state of affairs we are in and bring their own creative solutions to the table. This is our society and we have to step up to it.

Like moths to a light, many of you have come forward to contribute your bit. We don’t have all the answers and you are accepting of that. So if you haven’t already, write to hello@whitefieldrising.org and share what your inclination is, along with how much time you can spare. We have something for everyone. Even the busiest amongst you can still do something.