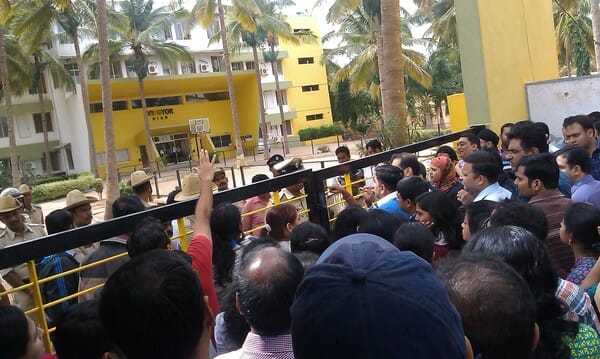 Facts as outlined by Police on Vibgyor High school case: “Alleged act on July 2nd. Complaint received on 14th. Full co-operation by School during investigation. Two people in custody as of 16th. Investigation at 80% completion and they are likely to conclude by 18th.” It implied they were very close to conclusion.

July 17th:
On request from Vibgyor parents and in a gesture of solidarity for the victim, Whitefield Rising requested all on the group to support a protest meeting organised by the parents. Their objective was to get Mr Rustam to answer the many questions they had. They had received no emails or any details on what had happenned. The only sms they said they received was that there was no school today.

9:30. Crowd gathered by the closed gate well before 9:30! Police on the inside, crowd on the outside. Many people were angry but some parents on the fore-front were keeping everyone as calm as possible so as to avoid a lathi charge!

10:30. The school had set up chairs and allowed the parents there to sit down and even gave them a mike system. The parents in the fore front outlined what the Police had said and what they had noted down as the demands of the Chairman of the school chain Mr Rustam, People were angry and outraged. But a few were continuously trying to keep the crowd organized so that the end objective was achieved. The mike system didnt work for a long time due to power outage.

11:30 Mr Rustam still not there. Hot and dusty but nobody left.

Finally he arrived and went into the building. In the meanwile, an ex-MLA of KR Puram and a Vibgyor parent was able to communicate with the parent group effectively and at the request of the police managed to convince folks that a small group of people should meet Mr Rustam privately inside. The idea was that a meaningful discussion will be had. Eventually he was to come out and address the crowd. Media was not allowed in.

12:15 or so, no update and people got worrried that Mr Rustam was leaving the premises

12:30 A few parents came out to summarize what they had heard from Mr Rustam and the gist was that he didnt think the crime was committed on campus. People were furious and wanted him to come out himself.

1:00 Worried that he had left the campus or that he was hiding, many parents went to the next building. A glass door was broken but there was no clarity on who actually broke it.
Finally many police appeared at the terrace of a building and it appeared he might talk from there.

1:15: Mr Rustam emerged tightly surrounded by Police. In summary he expressed that it was an unfortunate incident and he would personally want utmost punishment for the perpetrators and that he wants to continue the conversation with the parent group. Parents did not really get any chance to ask him questions but the one that snuck through was what the management culpability was and he said nothing. 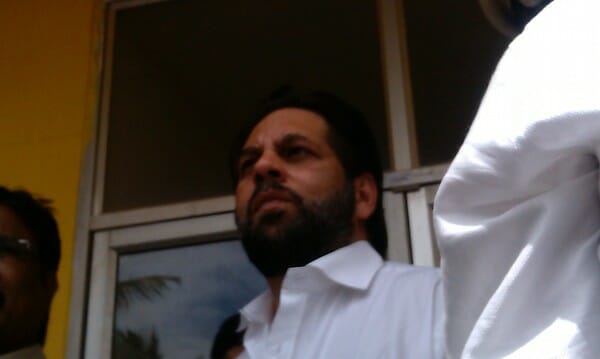 Many parents were angry and worried for their kids. They felt many incidents had happenned and the school hadnt really acted on it. The police were asked if the school’s license would be taken away. And they said if the school was found guilty of anything, they would push for it. Some did want school to get back to normal and over with the tamasha. They also felt other schools would not be any different. Many parents knew the names of those in custody.

So there is action that Vibgyor parents will take which we will support when they call upon us.
But there is action non Vibgyor folks should also take. This we shall outline in an email going out soon.

In all this, we are in extreme solidarity with the child and her parents.

This summary was originally posted by Nitya Ramakrishnan on Whitefield Rising Facebook group, and has been re-posted here with permission.