I am keying in these words while commuting to office in a bus. As is the norm with most buses, the big vehicle stopped ahead of the shelter at Whitefield’s oldest stop, impeding movement at the T-junction, and causing hardship to waiting passengers. As it is, with the raised platform razed during the recent repair works, pedestrians find it tough to cross the busy street. Dozens of photos and emails, meetings and training sessions later, there is no visible change: BMTC personnel refuse to fall in line.

Of buses and fares

With a monthly bus pass in pocket, I am saved the hassle of pestering the conductor for ticket or for change. For the umpteenth time, I rue the fact that BMTC has not reduced Vayu Vajra, Vajra or ordinary fares despite all our pleadings, and notwithstanding the decline in diesel price. Efficient and economical bus services can go a long way in easing congestion and lessening parking woes, besides reducing pollution and saving precious fuel (and valuable forex). 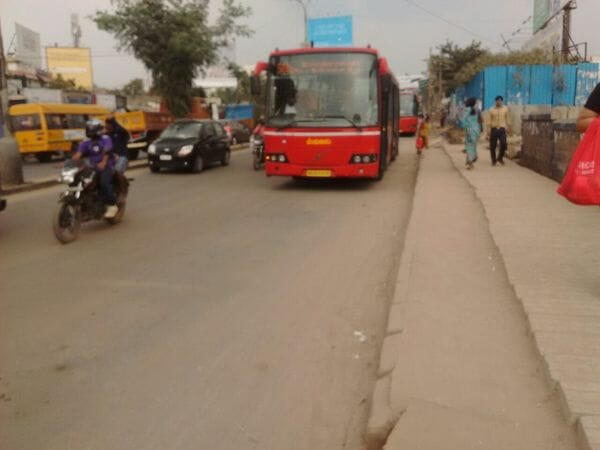 BMTC buses rarely stop at the busstops, on Whitefield roads. Pic: Pravir B

Bond with the lake

I now have a vantage view through a window seat, vacated by a passenger who alighted at Brooke Bond stop. Yes, the spot on Whitefield Main Road that gets its name from the Unilever Research Centre located here. I read that the research domains at the FMCG giant’s global research centre include skin and hair, laundry, foods and water. An online note informs me that Unilever’s recent initiative on water purification was driven predominantly out of this laboratory.

As we approach Varthur Kodi, the paradox dawns on me: purification versus contamination! The frothing and fuming lake flows as a living testimony of haphazard growth and indiscriminate consumption. BWSSB recently confirmed that some 200 MLD of untreated sewage is flowing into Bellandur Lake and the downstream Varthur Lake from south-eastern parts of the city. Add to that the daily increase and the undue delay in setting up of treatment plants. The city’s two biggest lakes have been the epicentre of myriad Facebook posts, newspaper reports and television debates, but have they spurred any concrete action?

Cacophony and a logjam

The bus ambles along, amid choking pollution. Along the way, the scenes are familiar: two-wheelers on wrong side or on footpath, cargo vans carrying protruding rods, vehicles crossing over the median in absence of barriers, haphazard digging for laying underground pipelines, manholes jutting out menacingly on the sides…

We finally arrive at the big hurdle: Kundalahalli Gate. This and the nearby Graphite India (GI) signal epitomise this burgeoning megapolis. To complete the spectacular quadrangle, a typical Whitefielder likes to add Hope Farm and EPIP-PSN junctions to the list. What a contrast! Five, ten or fifteen minutes at one signal in a city that had zero traffic lights two decades ago! A queue of vehicles, of all hues, of various sizes, with two, three, four or six wheels, just wanting to inch ahead. Some honk; some wait patiently! I Won’t Honk, Mission Peace, BTP app appeals have fallen on deaf ears, as using the horn is considered a birthright.

Today, the term loosely refers to wards 82–85 of Mahadevapura BBMP Zone, and sections of other four wards, too. Premises located in Mahadevapura – 560048, closer to the city, take pride in declaring their address as Whitefield. The big change, of course, came with the establishment of ITPB. And the initiation around 2000 of Export Promotion Industrial Park (EPIP) by Karnataka Industrial Area Development Board (KIADB). The rest, as they say, is history.

The two signals connect a road considered wilderness not long ago. The nineties saw the emergence of AECS Layout. I recollect my first ride on a semi-tarred, serpentine path, when I heard about Brooke Bond and Lipton (later unified with Hindustan Unilever or HUL) moving their corporate office from Kolkata (then Calcutta) to this area, setting up a sprawling campus named Brookefields—adding an ‘s’ to field from Whitefield and ‘Brooke’ from their iconic tea brand.

In a strange twist of fate, residents today are bonding over cups of chai or coffee to save the brooks (streams of fresh water) in the vicinity. HUL’s foods business moved to Mumbai in 2006. And earlier this year, the premises changed hands and may see the rise of another office park.

Graphite India junction, depicted in published charts as the most polluted spot in Namma Bengaluru, is where the newly developed IT corridor of EPIP-Whitefield meets the traditional industrial sites of Doddanekundi-Mahadevapura. Until a few months ago, a signboard at the junction used to complete the scene: Abide, WEPPIA and BBMP were to complete underpass work in July 2011. The sign adorned the junction for years, but there is little sign of the grade separator.

From the bus window, I watch the passing vehicles. Almost empty V335 and V500 buses returning after dropping passengers at offices in the vicinity, on perhaps the ‘best’ serviced bus route in the country, the route on which BMTC first began Vajra services. The path that gets preferential treatment even if fuel-guzzling Volvos return with only the crew, and even as nearby areas plead for more buses.

Yet you see some 200 cars in 20 minutes—crawling or waiting—most of them with a single passenger. Giving the benefit of doubt to 25% who may have homes nearby or may have dropped a friend or two en route, it is still a staggering number. Imagine hundreds of big and small cars with a sole occupant navigating the streets and this junction every working day, in In this day and age of air-conditioned buses and company vans, Whatsapp groups and Pool Circles!

The road on the right leads to International Tech Park Bangalore (ITPB), earlier known as Information Technology Park Limited (ITPL). It first got attention among Bengalureans when it hosted the first IT.com, and ordinary people like us were allowed to enter its hallowed precincts. As more MNCs made a beeline for ITPB, the entire area saw a spiralling of vehicles.

What a metamorphosis! To adapt a metaphor, all roads began to lead to ITPB. Whitefield Road, linking KR Puram to Hope Farm, has been unofficially named ITPL Main Road. Even establishments located miles away, from preschools to service centres, banks to hotels, vied to tag themselves to ITPL. It is no more an Ascendas-run office park, it is the very mascot of ‘Silicon Valley’.

Walk in the sky

Let’s get back to Kundalahalli Gate, where the 335E and 333E routes converge. As the bus crawls towards Marathahalli Bridge, I go through the newspapers. Reports say that the roads on this stretch would be repaired as part of signal-free corridor. When? May be when some of us will have broken a bone or two. The skywalk is a relief, but the elevator hardly works. Most buses stop near the junctions on both sides, adding to the traffic trail.

We now reach HAL: 10 km 60 minutes. Looking out, my eyes fall on a cow enjoying the sun—and the scene—seated near the central median during peak hours on a weekday outside HAL Airport, a place where VVIP planes land, Tejas goes through trials, defence aircraft undergo a test. I then see two calves, merrily unaware of the fuss surrounding them. Near Kemp Fort, two bikes on the wrong side, riding on the pavement—each carrying a family of four and none wearing a helmet.

Rule of the road

Anarchy on the streets continues as you pass through NAL and ISRO Satellite Centre, not far from ADA and DRDO, all vital centres of India’s strides in space and missile technology. As you approach Domlur, where the much-touted multi-million signal-free corridor to Whitefield begins, you are greeted with familiar sights: cows feeding on mounds of plastic on one side, and a ‘cow shelter’ on the pavement on the other side.

Not far from where the hospital that caters to Bengaluru-based Training Command of Indian Air Force. My bus and the next one stop far ahead of the two MPLAD-funded bus shelters. Notwithstanding they being just opposite Domlur TTMC.

Past M G Road and Cubbon Road, we are at Shivajinagar bus terminus. A familiar sight greets you. Three traffic policemen catching those who inadvertently pass a not-so-well-marked BMTC-only corridor! You get off the bus, wondering whether acquiring land, moving utilities, widening roads and constructing flyovers for signal-free corridor are easier than preventing cows from obstructing movement on arterial roads, or regulating movement of buses. Rocket science, did you say?

Feeling Bengaluru’s pulse with Citizen Matters pre-BBMP poll survey!
If you are contesting BBMP elections, now reach out to voters for free!