Whitefield Rising hosted an enlightening session on Sunday, September 26, with eminent environmentalist A.N. Yellappa Reddy, who connected the dots among environmental consciousness, waste management, sewage treatment, lake purification, biodiversity promotion, and reconnection with nature. Held at the serene campus of Ecumenical Christian Centre, the session titled ‘Increasing Urban Greenery to Promote Healthy Living’ was attended by more than 60 citizens of all ages from different parts of the city. 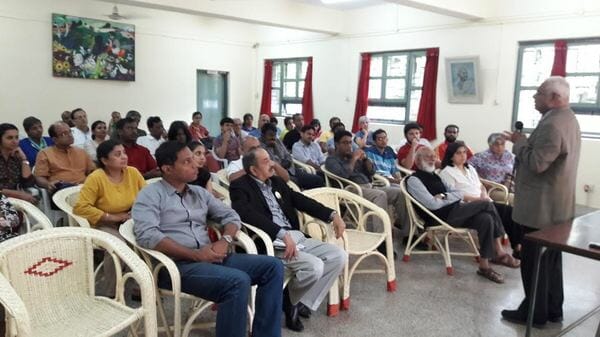 Mr Reddy explained the various ways in which citizens could make a difference—through the choices they made and by questioning the administration. He told the audience that Whitefield could serve as an exemplary centre for environmental awareness and citizens’ involvement in improving the ecosystem. He also offered to provide guidance for green initiatives.

Mr Reddy described the fine balance in nature with the fitting example of how caves attract bats, whose droppings promote fungus growth, which feeds the beetles. The beetles in turn enable pollination of the aquatic plants, which are an integral part of the purification cycle of lakes.

(This was written by Sharlene Das and RajaRajeshwari Nagasigamani, volunteers of Whitefield Rising.)

More about the Speaker

Mr A.N. Yellappa Reddy is a graduate in agricultural science and a post-graduate in soil science. He was a member of the Indian Forest Service, and served as Administrator of Forests for 20 years. He was in the Research Wing of the Forest Services for 10 years, and also held the post of Chief Conservator of Forests. He retired as the Secretary, Department of Ecology and Environment, Government of Karnataka.

Mr Reddy has written a book titled ‘Sacred Plants’ about the plants used in various rituals, wherein he explains the logic and the science behind their usage. He is a governing council member, Foundation for Ecological Security of India. He is also member of Karnataka High Court Lok Adalat, as well as the Chief Advisor, Bangalore University Biodiversity Park. He is an active member of Bangalore Environment Trust.

Notes from the Talk by AN Yellappa Reddy