If you are like most people, you are only vaguely aware of Kundalahalli Lake. Maybe, it is to you that largish pond between AECS layout and EPIP. A water body whose shimmer perhaps caught your eye while you once glimpsed out of your tenth-storey office window. If you are a motorbike-rider, it is a well-known — and sadly, illegal — shortcut to your workplace. 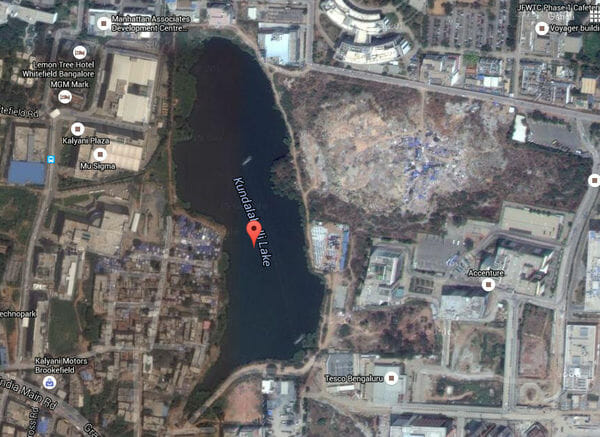 No wonder that this lake, an urban environmental gem, is largely unvisited except for transit purposes. For it is hidden, surrounded by that most Bangalore of combinations, that is, gleaming tech-parks and wretched slums.

Almost everybody is guilty of dumping sewage into Kundalahalli Lake. Slums, certainly. But even ‘pucca’ multi-family dwellings and large offices: either they don’t have a sewage treatment plant, or, if they do, its functioning is rarely monitored. As far as pollution is concerned, Kundalahalli Lake is definitely a typical Whitefield lake.

All that may now start to change. With the help of CSR funds from prominent Whitefield companies, local citizens and BBMP have joined hands in order to develop a nearly 800-kiloliters-per-day sewage treatment plant that is located on the lake shore. The treated water is to released to the lake, thereby replenishing it with clean water. 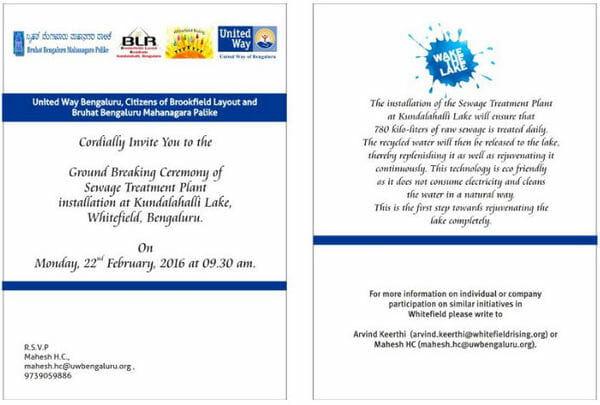 This is only a first step towards rejuvenating the lake completely. A day will come when the lake is completely free of sewage; when it becomes inviting and accessible to walkers, bird-lovers, or just about anyone wanting to enjoy an urban environmental refuge. When migratory birds congregate and make it a micro-Ranganthitu. It has been done at other lakes of Mahadevpura, and Kundalahalli’s turn is now only a matter of love and time.

In the past, lakes were cleansed by diverting the sewage away from the lake — but that had an effect of kicking the sewage down the stream. In the approach of Kundalahalli, sewage, after purification, is regarded as a source for lake water.

But why stop at Kundalahalli Lake?

I estimate that the CSR funds available annually from Whitefield-based companies is conservatively Rs 100 crores. With government support and funding, and the ever-vigilant citizen groups of Whitefield, it is not too difficult to conceive of a joint citizen-government-corporate plan to tackle the most visible symbol of Whitefield’s decay —the Varthur-Bellandur Lake System.