The morning of April 23rd saw around 25 residents of Mahadevapura Zone coming together in support of the anti-plastic ban. Volunteers of Whitefield Rising visited dozens of shops on Borewell Road, creating awareness about plastic and Styrofoam menace. During the drive, BBMP officials seized disposable material from shops that were selling or using them despite the ban.

“This was the fifth such drive in Hagadur (Ward 84) within a month. As part of this campaign, we educate traders about the banned items and available alternatives,” said Vaibhav Jain, a Whitefield Rising volunteer. “Excessive use of plastic leads to land, water and air pollution. Tonnes of plastic reach landfills daily and contaminate our soil and surroundings,” he explained.

Meanwhile, BBMP officials and workers pulled down at least 100 illegal flex hoardings and posters between Whitefield Post Office and Nalurahalli junction. Residents cheered as the BBMP van carted away the hoardings of various sizes and hues. “These are eyesores; flex is not resuable, it chokes the drains, and is against the letter and spirit of Swachh Bharat Abhiyan,” said a long-time resident while welcoming the enforcement. 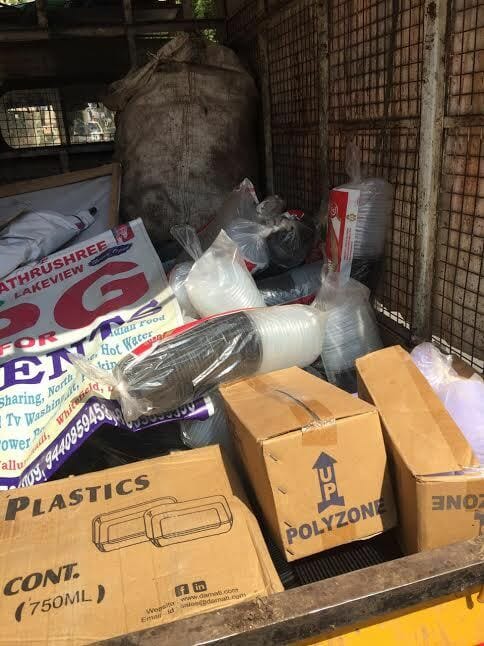 A BBMP van is loaded with the flex and plastic confiscated from traders. Pic: Pravir Bagrodia

Chronology of citizen campaigns in Hagadur

On the same day, around 50 volunteers of Swachch Doddanekundi Initiative and Whitefield Rising participated in a similar walkathon in Ward 85 on Saturday, creating awareness about plastic ban among shopkeepers and shoppers. They assembled near Hanuman temple on Graphite India Road and walked towards Kundalahalli Colony market and AECS Layout Main Road, while interacting with traders en route. BBMP officials seized about 50 kg of plastic from shops in the area during an enforcement drive.

“Single-use plastic is among the main contributors to the garbage woes of our city. Due to low recycle value, it invariably ends up on the roadside and in open drains, clogging them,” said Babita Saxena of Swachch Doddanekundi Initiative. “Garbage piles are burned causing serious health hazards to residents,” she added.

How did it all start?

The inspiration and support came from HSR Layout, Yelahanka, Ward 81 and other areas of Bengaluru which have successfully campaigned against plastic use.

The campaign in Ward 85 was effectively launched on March 13th when a group of residents met the Corporator, Shweta Vijaykumar, and the BBMP team. A meeting of residents welfare associations was held on March 19th, and BBMP organised a traders’ meet on April 4th. Similar meetings were held in Hagadur ward in March.

During the last one month, volunteers have been campaigning in various parts of Mahadevapura Zone, sensitising the traders about the harmful effects of single-use plastic products, and educating them about alternatives available. Hundreds of shops have been visited.

Alternatives to the banned items