Traffic congestion due to increased private vehicles and expensive public transport, respiratory diseases from polluted air, pedestrians’ problems owing to poor roads and footpaths et al, have become a part of life of Bangalore. Here are some disturbing realities and possible remedies to these interlinked challenges.

A joint discussion held by the Centre for Science and Environment (CSE) and the Karnataka State Pollution Control Board (KSPCB), in Bangalore on March 22, 2013 rated the Karnataka capital among 14 Indian cities which have high particulate pollution. They warned that it may enter the ‘critical’ category if the situation is not addressed immediately. An analysis by CSE says that Bangalore and other southern Indian cities must introduce advanced technology, scale up public transport, create multi-modal transport options, restrain car usage and encourage walking to improve air quality.

Anumita Roychoudhury, executive director-research and advocacy of CSE observed, “Half of India’s urban population breathes air laced with particulate pollution that has exceeded the standards. Around a third of our population is exposed to critical levels of particulate pollution. We want to find solutions to these daunting air pollution and mobility challenges facing our cities by sharing lessons from other cities to chart the future course of action”.

Speakers at the briefing included Vaman Acharya, chairperson and H P Prakash, member secretary, KSPCB; H Paramesh, director, Lakeside Medical Centre and Hospital; and C G Anand, chief mechanical engineer, Bangalore Metropolitan Transport Corporation, among others. At the workshop, CSE presented its findings and analysis of the state of air pollution and urban mobility in the southern states. The highlights about Bangalore are:

• Based on an analysis of air quality data from the Central Pollution Control Board (CPCB), nearly 50 per cent of southern Indian cities have high particulate pollution. 14 cities including Bangalore have high levels for particulate matter 10 (PM10) with a 41 per cent increase for Bangalore over the last few years.

• Bangalore is one of ten southern cities that indicate rising nitrogen dioxide (NO2) levels. In recent years, Bangalore has crossed the standards, sometimes.

• Of nine locations in Bangalore, three show over 50 per cent exceedance of the PM10 24-hourly standard. Seven locations out of nine exceed the annual average standard. Of the total locations, three are critically polluted – these include Graphite India, Yeshwanthpura police station, etc.

• In Bangalore, vehicles contribute 41 per cent of the particulate matter and 67 per cent of nitrogen oxide levels in the air.

Mobility crisis
CSE’s analysis of motor vehicle registrations in Bangalore indicates that more than 1,200 vehicles are registered every day. Of these, 250 are cars and nearly 900 are two-wheelers. The vehicle stock in Bangalore is half of that of Delhi, but the city is already badly gridlocked. Travel speed has dropped to 15 kmph during peak hours and there is hardly any parking space. Traffic on most roads is 2.5 times over the capacity. An average citizen of Bangalore spends above 240 hours stuck in traffic each year resulting in loss of productivity, reduced air quality, reduced quality of life, and increased costs of goods and services. Travel by public transport is falling – the present modal split of 54 per cent in favor of public transport is estimated to fall to 49 per cent by 2025. In cities like Bangalore and Chennai, about 17-23 per cent of the road length is being used for parking. 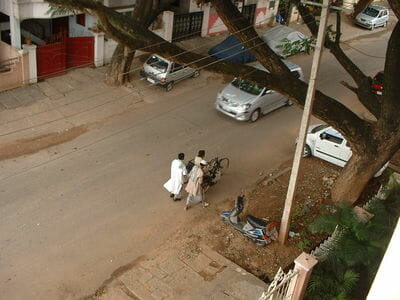 Health risks
• The International Agency for Research on Cancer (IARC), a wing of the WHO has said that diesel engine exhaust can certainly cause cancer, especially lung cancer, in humans. This finding comes at a time when India has failed to adopt a clean diesel road map, prevent use of under-taxed and under-priced toxic diesel in cars, and reduce its overall consumption in all sectors. Governments in Europe, the US, Japan and other countries are leapfrogging to clean diesel. Diesel is considered relatively cleaner when advanced emissions control systems are used with diesel fuel with 10 ppm sulphur content. But the diesel sulphur level in India is as high as 350 ppm. Only a few cities have 50 ppm sulphur diesel – which is five times higher than the global benchmark.

The latest Global Burden of Disease report has ranked air pollution as the fifth largest killer in India. Several studies done in Hyderabad, Bangalore and Chennai reveal health impacts of air pollution on traffic policemen who are directly exposed to traffic pollution in these cities. In 2008, the KSPCB along with Enzen Global had released the Greenhouse Gas Inventory of Karnataka. This showed that emissions of both greenhouse gases and health damaging local air pollutants have been increasing in Bangalore. Two-wheelers accounted for 56 per cent of the carbon monoxide emissions while local air pollutants and heavy duty diesel vehicles accounted for 60 per cent of the carbon dioxide emissions. Without interventions, the levels of particulate matter, carbon monoxide and carbon dioxide are expected to double over the next decade. According to the report, petrol and diesel consumption increased during the assessment period (1997-98 to 2005-06).

Challenges of bus reforms
In 2005, the Asian Development Bank had estimated for Bangalore that an increase in bus share to 80 per cent will save about 21 per cent of the fuel consumed in the base case; lead to 23 per cent reduction in total vehicles, free up road space equivalent to taking off nearly 418,210 cars from roads, reduce CO2 emissions by 13 per cent, and bring down PM levels by 29 per cent and NOx by 6 per cent.

The bus stimulus scheme of the JNNURM programme has catalysed central government investment in bus rolling stock. Bangalore, Chennai, Mysore, Coimbatore, Vishakapatnam and Puducherry are some of the key beneficiaries under the programme. However, bus reforms and investments are just not about buying new buses, but also about efficient deployment of reliable and attractive services. Cities require immediate improvement in service level in terms of frequency, reliability, coverage, information, ticketing system, signaling, etc.

• For cars, diesel prices are increasing 50 paise at a time. But for bulk buyers like buses, this has been hiked by 10 per cent. In Chennai, fuel cost is 29 per cent of the total operational costs. In Bangalore, it is 38.6 per cent. Delhi has big bus fleet but comparatively lesser fuel costs mainly due to the use of cheaper Compressed Natural Gas (CNG). Addressing fuel cost of buses is necessary as the higher price for diesel would increase fares and riders would switch to two-wheelers whose operational cost is around Re 1 to Rs 2 per km, only.

• A CSE review shows that almost all state governments tax buses higher than cars. The Bangalore Metropolitan Transport Corporation (BMTC) pays taxes of nearly Rs 1.65 per kilometre, which is approximately 10 per cent of its total variable costs. Additionally, taxes on inputs required in the bus service like spare parts, tyres, tubes, etc. amount to another 2 per cent.

• The BMTC has carried out a detailed assessment of the trends in fuel economy over time. The analysis shows that while moving from Euro II to Euro III technologies, the increase in power, torque, and performance without fuel economy norms has led to fuel economy penalty. Additionally, there are problems of idling, frequent acceleration and deceleration on congested roads. This costs the bus company greatly. A recent study by CAI Asia shows that by reducing idling by 10 minutes, the BMTC can save 100 litres per bus or Rs 3 crore annually. Also, improved driver training and maintenance, can save Rs 23 crore yearly.

Despite growing dependence on cars, walking and cycling and public transport still dominate travel in southern India. In Bangalore, Chennai, Hyderabad and Kochi, walking, cycling and public transport trips consitute 73-76 per cent of all road trips. Car trips form only 8-10 per cent of the total trips in these cities. The share of formal public transport is the highest in Kochi at 51 per cent, followed by Bangalore at 35 percent and Chennai at 31 per cent. But alarmingly, a study conducted by Wilbur Smith Associates for the Union ministry of urban development indicates that cities like Bangalore are already reaching the tipping point where car trips are overrunning walking and cycling trips.

• Tighten fuel quality and emissions roadmap to ensure that pollutants are cut at source. Introduce Euro V and Euro VI on a nation-wide basis with an early timeline. Strengthen emissions checks on in-use vehicles.

• Implement walkability audits. Have a zero tolerance policy for accidents.

While it is the duty of the government to make Bangalore ‘livable’ and usable by all, it is also our right and responsibility to  save and spare the city for all!