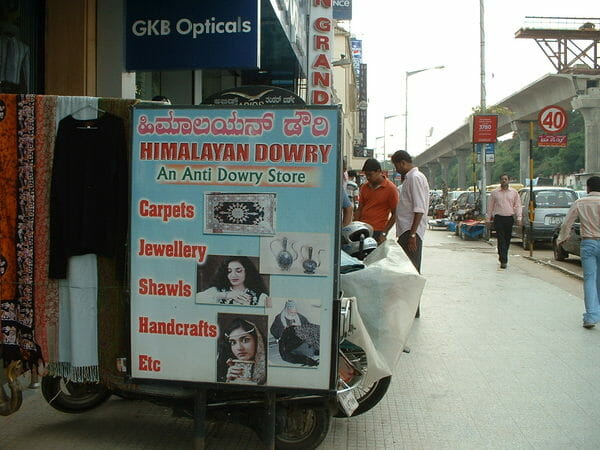 At first glance, the store called "Himalayan Dowry An Anti-Dowry Store" seems like any other place dealing in Kashmiri handicrafts, except for its name. Only on enquiring, would one realize that there is more to this outlet situated on M. G. Road. Incidentally, it is in the basement of a building near the office of the Printers (Mysore) Pvt. Ltd. (publishing Deccan Herald, Prajavani, et al).

According to the website of the store, it traces its origins to an establishment in Kashmir in the year 1809. This was founded by a great Sufi and healer, Kh. Naqi Ali Shawl from Hamdan in Persia. He apparently introduced the trade in shawls to the world and his descendants hold the title even now. Zafar A. Shawl runs the Bangalore unit started in 1988 on Commercial street, originally. It stocks a range of Kashmiri jewellery, pearls and precious stones, Pashmina shawls, hand woven carpets, silverware, brass and wood work, painted and papier mache pieces, etc.

Rani Vijayadevi, Thakurani of Kotda-Sangani and a sister of Jayachamaraja Wodeyar, the last Maharaja of Mysore, inaugurated the present shop in Bangalore in 1990. As per records, an exquisite Jamawar shawl and sparkling jewellery were sold to Rajalakshmi, Rani of Shawaganga and Rajkumari Kamakshi Devi, a daughter of Jayachamaraja Wodeyar, respectively. At one time, the store was one of the two private shops from India to be listed in Let’s Go (India and Nepal), the world’s best selling budget travel series book. The outlet exports handicrafts across the globe and attracts customers from everywhere. It is authorised by the ministry of commerce, government of India. 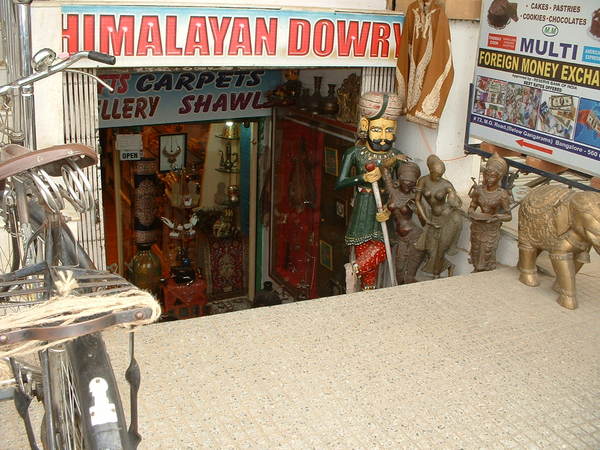 The phrase Himalayan Dowry was derived from a 14th century ritual where a girl’s family would give a Himalayan stone as a dowry to a prospective groom. The boy’s household would reciprocate the gesture. However, if the girl did not like the alliance, she would return the stone. Zafar Shawl says, "We want to take people back to an age when dowry was was a beautiful concept and not a curse". He is a certified gemologist and crystal healer who studied in the city and has spent most of his life here apart from some years in Europe.

Owing to objections from women’s groups who thought that he was promoting the exchange of dowry, Shawl added the words An Anti-Dowry Store. Further, from 1992 onwards, he has been assisting victims of dowry harassment in Bangalore and Kashmir by counselling their husbands and marital families. Some of the items in the outlet are made by women who have suffered due to the dowry menace. The funds from the sales are redirected to the ladies themselves. "Our anti-dowry effort is a voluntary one. We do not wish to become an NGO or promote this activity specifically", shared the modest Shawl. He has reached out to more than fifty ladies in distress. There is also a helpline which connects women affected adversely by the dowry system to people who are experienced in handling such cases. In keeping with the renewed focus on gender crimes, Shawl has also initiated efforts to sensitize students in high schools and colleges about the issue.