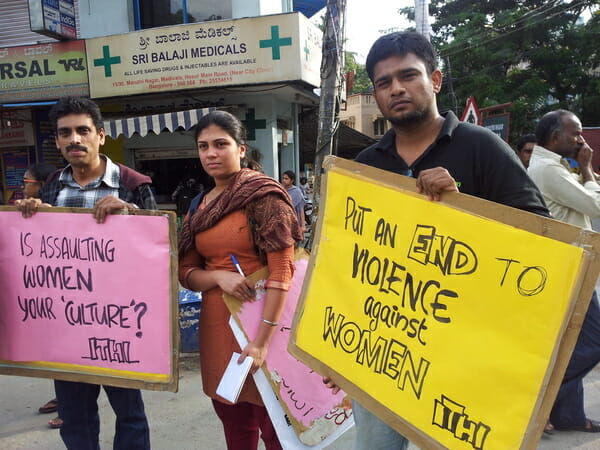 That was how around 40 of us reclaimed our space vociferously and visibly on the roads of Madiwala (South Bangalore) and its environs between 5.00-7.00 pm last Saturday, 4th August. We energetically and emphatically expressed our views against various recent cases of moral policing and sexual assault across India including Guwahati, Mandya (Karnataka) and Mangalore. Ithi (meaning "a start" in Sanskrit), a support forum for women employed in the IT/ITeS industry organized the action which attracted necessary attention from local residents, college students and onlookers some of who joined us. Starting with a stationary protest at a busy corner near the BMTC bus stop, we walked for an hour with slogans, pamphlets, placards/posters venting our outrage and rejection of sexual violence and the irresponsible and unacceptable response and attitude of state representatives (women’s commission chairpersons, police and ministers). "Most people have experienced (including us) gender specific harassment in their private, public and professional lives. But we rarely discuss that openly for various reasons", observed Deepthi R, who works in the IT industry. Obviously, shame, low self-esteem, unempathetic family, friends, colleagues, insensitive media or state, insufficient redressal mechanisms et al are often why those facing sexual discrimination and atrocities prefer to be silent about them.

Madhu, a transgendered person from the Jayanagar zone of Samara (a community based organization for sex workers and sexual minorities) shared, "We are here to support the protestors and highlight our condition. An altered sexuality orientation is natural for us. But we undergo ostracization at home and outside because of it making it difficult for us to find housing, education and jobs. Further, goondas and the police often exploit us physically and emotionally. The latter sometimes imprison us under false cases and torture us. And the government denies us our basic entitlements like family ration card, voter id., etc. and the specific benefits announced." 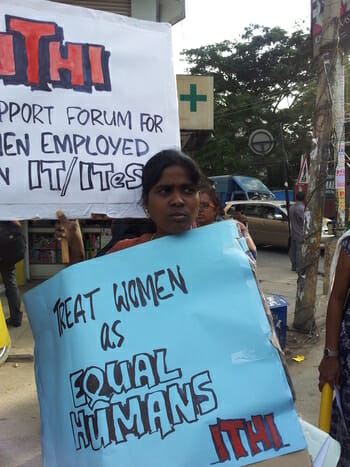 Members of the Karnataka chapters of the National Federation for Indian Women (NFIW) and Women Against Sexual Violence and State Suppression (an informal network of women’s rights organizations across India) participated. Conveying their solidarity, many human rights defenders across Bangalore appreciated the idea and importance of a demonstration at an unusual location. ITHI volunteers Chithra P and Sudha B summed up, "Content that we registered our voice against this issue, we parted with the spirit of continuing similar struggles".