"I brought my younger daughter to the park as she has her summer holidays and was keen to find out what this event is all about. My older girl is in doing well in high school", beamed Rafiq Ahmed (name changed) who visits Bangalore regularly from Tumkur. He was one of the eager members of the audience that swelled after the annual Global Walk for India’s Missing Girls that started outside the Haji Ismail Sait mosque in Frazer Town reached Coles Park around 4 pm on Saturday, May-5, 2012. The motivation behind the Global Walk (which has been conducted in over 15 cities in India, Canada, the US and West Asia) is Nyna Pais Caputi, a San Francisco based Indian film maker who is a friend of Jacqueline Colaco, the Treasurer at Association of People with Disabilities (APD) and the organizer of the programme. Caputi was aware of gendercide but realized the extent of the challenge when she and her husband tried to adopt a baby girl in India. At present, Caputi is creating a film Petals in the Dust to focus attention on this issue.

Colaco is a spirited lady from Cooke Town (a neighbourhood in Bangalore Cantonment) who actively champions various campaigns for social justice. She held the Global Walk in collaboration with non-profit organizations such as the South India Cell for Human Rights Education and Monitoring (SICHREM) and APD and local publications like Frazer Times. "The objective of this walk is to highlight the appalling decrease in the child sex ratio even in cities like Bangalore. This is primarily due to growing instances of female foeticide and infanticide across India", Colaco shared with over 100 people from across the age and income spectrum that the initiative attracted.

The violence of silence

While the tragic case of 3 month old baby Afreen, whose father allegedly battered her to death in the city last month was widely publicized, many similar incidents take place unknown to anyone other than those directly involved in this inhuman and irrational crime. This is because they occur with the silent collusion of various parties such as healthcare professionals, family members and sometimes public service providers like the police and politicians. According to the national census data for 2011, the child sex ratio in India is 914 – a fall from 927 in 2001. This implies that a few million girls have been murdered through sex selective abortion and other means. 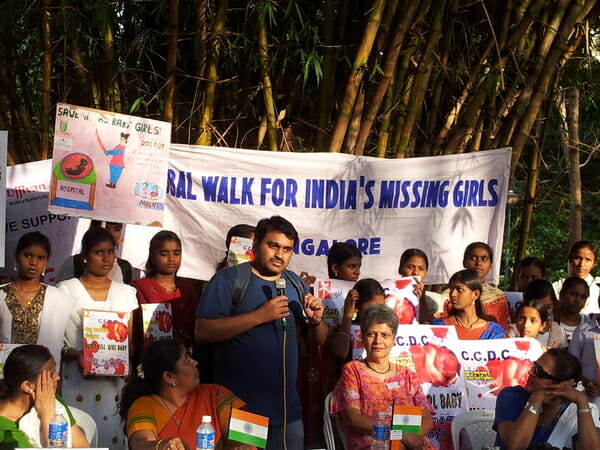 The chairperson of the Karnataka State Commission for Women, C. Manjula, who also participated in the walk said, "The government will do its best to educate society against killing girls or harming women and punish those who are guilty of such actions. But it needs the support of youth, social workers, the public and the media". Donna Fernades from Vimochana (a Bangalore based NGO that assits women who have experienced domestic violence) added, "Although there are legislations like the PCPNDT Act that are supposed to discourage the murder of girl babies in the womb and outside, we all know that there are many that simply do not allow girls to be born or live happily. It is important for us to change this scenario collectively".

Whenever I participate in such activities, I cannot but wonder if they will have an impact. In that context, 2 aspects of the walk stood out for me. One of them was that it happened in a park surrounded by residential neighbourhoods thereby providing an opportunity for the elderly to express their solidarity with the initiative. This rarely occurs with protests and rallies that occur in or around Mahatma Gandhi statue, Freedom Park or Town Hall. The other was the presence of persons like Ahmed whose positive and progressive attitude towards girls (sadly, a fading phenomenon) was heartening. People like him are the slivers of hope that human(e)kind hangs on to!