"Uncle Sam, put on back your pants" a line from one of the compositions of Jamaican-Canadian-African dub poet D’bi Young Anitafrika is one that rings in my head on a regular basis. It works as an essential reminder of the number of soulless ‘uncles’ who abuse children sexually. But according to Young who performed at the Jaaga Creative Common Ground in Bengaluru on 28th January 2012, it is also a metaphor for how selfish capitalists continue to rape and ravage life on earth without sparing a thought about the adverse impact of their actions. Well, if they take the good of others into consideration, they would slow down and perhaps stop eventually, right? 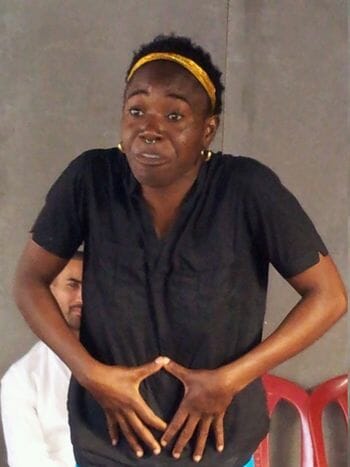 "Story tellers are like mirrors and must handle their stuff too. They must practise, practise and practise. It is important for them to know their body" D’bi shared at end of her poignant and powerful show. Her piece was a part of the year’s first edition of Pause: In Times of Conflict series of events that have been organized by city based community media and arts collective, Maraa since the last few months.

A relentless traveller
An outspoken person with a sense of humour and very fluid body movements, the 34 year old Young wanted to learn martial art, previously. She has travelled across continents with her two young sons for her performances and workshops among marginalized communities. D’bi revealed, "My kids and I are nomads who have been looking for a permanent place for 12 years. People who invite her care for my boys. I learnt by observing my mother whom I accompanied on her performance tours. I don’t take short cuts." 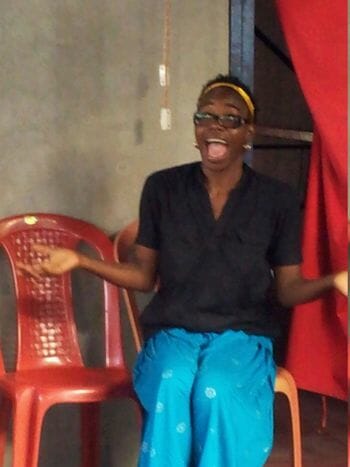 According to Young, sometimes people suffer for telling the truth but they must not fear that or be shy to seek or share information. Recalling how a teacher once told her to ignore rumour mongering, D’bi observed, "People are the revolution. Look within yourself for change. Otherwise we can talk endlessly about others while doing nothing ourselves. What we must negotiate is shame and not just truth telling".

With her plays and poems published in four books, Young derives her immense optimism from the people who sit and ponder wherever she performs. Her mother Anita Stewart is one of the pioneers of dub poetry, a form of performance poetry of West Indian origin, which evolved out of dub music consisting of spoken word over reggae rhythms in Jamaica in the 1970s. This genre primarily voices concerns regarding political and social justice and current events.