Around mid August this year, 21 volunteers from 14 countries arrived in southern India to work and learn from marginalized communities about their challenges pertinent to health and sanitation. They were part of "Health on Stage", a six week project where they learnt to use forum theatre to initiate simultaneous dialogues on public health in low income areas of Bangalore, Mysore and Chennai. And on 30th September, the 3 groups of participants, their trainers and faciliators gathered in Bangalore to share their experiences with healthcare professionals, media persons and theatre artists.

It is well known that water related illnesses are the bane of economically backward parts of urban and rural India. These arise mainly due to unhygienic habits such as open defecation and garbage dumping particularly near sources of water. "Women in the self-help group (SHG) that I am part of discuss and try to resolve these issues. But they are tired of external interventions to assist them, sometimes. However, they were intrigued when people from abroad made an attempt to understand their challenges and find alternatives. And, the use of street plays attracted them", revealed Rubini Raghunathan, a "Health on Stage" volunteer from Chennai.

Forum Theatre combines music, dance, dialogue and movement to convey its message. Jaya Iyer, theatre practitioner and teacher for 20 years, observed, "It is has its roots in Theatre of the Oppressed. It is muti-layered and seeks solutions, while offering different perspectives of a social problem". According to Felimon Blanco, a "Health on Stage" volunteer from Philippines and a performing artist, they instantly connected with the communities despite cultural and linguistic differences. He plans to train young people in the arts in six villages in Bagadian in the Philippines under the Community Arts Training Programme. Krishnamurti, a street theatre artist from H. D. Kote taluk and project volunteer mentioned, "The performers from Eastern Europe and South East Asian countries were fascinated by India. They incorporated some theatre traditions from that are part of their culture". 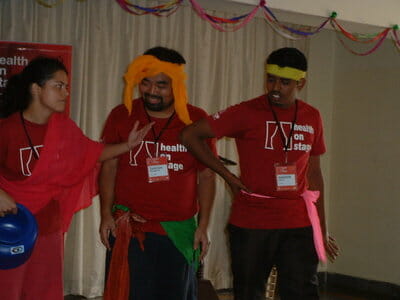 In Bangalore, volunteers like Dinesh directly interacted with people from financially challenged neighbourhoods in Yeshwantpur to identify their primary concerns and needs. Afterwards, they scripted narratives that highlighted these points and how the local people could seek the help of their community and the government to obtain their basic entitlements. While do so, the area residents had to ensure that they did not contribute to the situation worsening. "Although I was new to this environment and apprehensive in the beginning, I could interact through the plays and local representatives, remarked Suzanne Prak, "Health on Stage" volunteer and forum theatre practitioner from the Netherlands. At the end of every performance, people from the audience were encouraged to provide their feedback. As per Nagoor Kani, a community development worker from Bengaluru and "Health on Stage" volunteer, community leaders, women and youth appreciated their efforts and communicated their opinions on public health issues that the initiative addressed.

Debasmita Dasgupta, Project Executive, Public Affairs at the "The Asia-Europe Foundation (ASEF) said, "While most of the volunteers will return to their base locations, a few will continue to be part of the project in India for at least 6 months for follow up activities". ASEF partnered with the Coordinating Committee for International Voluntary Service (CCIVS) to organize "Health on Stage" to commemorate the United Nations Volunteers’ (UNV) 10th Anniversary of the International Year of Volunteering (IYV+10) and the European Year of Volunteering. The NGO, Field Services and Inter-Cultural Learning (FSL India) hosted the programme in Bangalore, Chennai and Mysore.

At the concluding Open Day event, Dr. Sanjay, a public health specialist from FSL India expressed his belief in the ability of theatre to penetrate where technology and mainstream media have not reached yet. And Rahul, another "Health on Stage" volunteer told everyone present how people benefited from the performances personally. "The local residents want to be responsible for cleanliness of their surroundings. In some of the village communities, people want similar activities to be included in the school curriculum." With the project reaching out to around 1200 kids among the nearly 3000 persons who participated in it, it will be interesting to see its long term outcome.