When we come across a unique not for profit organisation, social campaign or initiative, we may be interested in knowing more about its regular activities and achievements. But do we try to find out why and how it started?

Irrespective of their size and successes, many civil society organisations (CSO’s) or non-governmental organisations (NGO’s) have a distinct personal story behind them. Some organisations like Sangama (helps sexual minorities) or the Association of People with Disabilities (APD – supports disabled persons) were started to highlight and counter the challenges or discrimination that an individual or a community experiences and assist them. Others such as the Freedom Foundation (assists substance abusers and HIV infected) were begun by those who had faced or overcome obstacles in their lives or helped a friend or family member with it. Then there are those, which are founded due to an ideal, inspiration or being provoked or moved by one or more specific incidents.

These people took the decision to make a difference with commitment and passion. The one thing common among such people is the zeal to reach out to people who need assistance but have minimal access to it.

Mary Selvaraj in a pensive mood

Over a decade ago, Mary Selvaraj started noticing that her older son Siddharth (then a student in class V at one of the reputed schools in eastern Bangalore) was faring badly in a couple of subjects despite his best efforts. Concerned, Mary started enquiring and reading about children with decreasing academic abilities/performance even though they seemed fine. She found it tough to get relevant information. Mary discovered that Siddharth had challenge with learning that could be categorised as a disability."We decided that Siddharth would live and work with his reality and I learnt about it managing it along the way", Selvaraj shared. With the encouragement and guidance of his mother and support from the rest of his family and friends, Siddharth secured a postgraduate degree in fine arts. He is now a confident young man in his early twenties running a design studio with his peers. 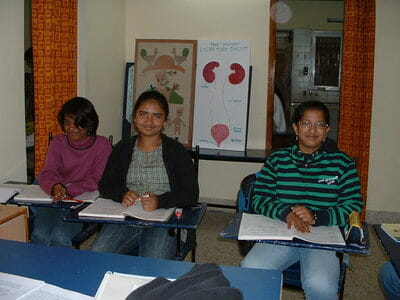 Importantly, Mary did not stop with paying attention only to her son. She underwent a course in special education that a friend had suggested. Further, she launched Sameeksha (http://www.sameekshaschool.com), a non-profit school that caters to children having challenges with academics. A self-funded institution, it has a around forty students, some of whom such as Diana or Sameer exhibit symptoms of Attention Deficit Hyperactivity Disorder (ADHD) or mild biploar disorder (BPD). Selvaraj says, "Many of these behavioural illnesses are not easy to recognise". A few students like Asha or Reuben are also physically challenged. Some others come from homes where a parent is alcoholic, violent, has lost a job unexpectedly or passed away suddenly. Many of the kids have difficulties in reading and mathematics. Some are distracted easily and do not sit still or concentrate. Apart from these behavioural issues, some children are from single parent or emotionally disturbed families. The words of the children, "We like this place more than our previous school. We want to be here forever", are testimony to the positive impact that Sameeksha is making in their lives.

Prasanna Kumar B. Shirol, the president and state co-ordinator of the LSDSS and his wife Sharada have a young, enthusiastic and artistically inclined daughter Nidhi with the rare disease called Pompe. Prasanna Shirol therefore became the founder and president of the LSDSS which was established in February 2010. This writer chanced a brief meeting with the family at the January 2011 edition of Bangalore’s annual event Chitra Santhe. "We are here primarily because she is a keen painter", they told me as their girl expressed her excitement at some of the lovely paintings she saw at the Santhe.

LSDSS is a group of people (patients/families/caregivers) impacted by Lysosomal Storage Disorders (LSD’s). It tracks global research into the causes, treatment and management of these diseases. LSDSS also attempts to increase the information, support and facilities available for timely diagnosis, consultation and treatment of LSD patients in India. It campaigns for early diagnosis and effective, affordable and safe therapies for LSD diseases like Gaucher, MPS, Fabry and Pompe.

LSDSS also advocates with the central and state governments and other stakeholders to establish a sustainable health care model for all LSD patients in India. It also aims to develop mechanisms for rehabilitation, counseling, capacity building and fund raising.

After Jayant Shah started getting rid of his chemical abuse problem through Alcoholics Anonymous, he began to believe that "a power greater than himself could restore him to sanity". A former entrepreneur in the pharmaceutical industry and a recovered addict, Shah founded CAIM in the year 1982 in an empty movie theatre in Bangalore. Being the first de-addiction and rehabilitation centre in India, it has worked with over thirty thousand patients. People whom CAIM has assisted have established more than forty such across the country in the last fifteen years.

When asked about his overall approach, Shah shared, "Nowadays, I conduct one on one sessions for a few people for up to a hundred and twenty days per person. We live in the same place and I am involved almost 24/7. Each individual has different challenges and comes with various justifications for chemical addiction". A highly committed and pragmatic individual, Shah takes a break from his work for a few months a year to rejuvenate himself.