Do you know how much of the pollution in the world is caused by cars? Some studies put that at 40%. As a result, some across the globe have chosen to observe 22nd September as World Car Free Day. ESAF, a Bangalore based not-for-profit organization that is campaigning to make the city a child friendly one, decided to do its bit to create awareness on the advantage of not using cars. On the 21st, the NGO has planned to distribute handbills along with 2 English and 1 Kannada newspapers to persuade car users to consider taking public transport.

"Some friends and acquaintances have volunteered to spread the message in large technology companies by talking to their co-workers and displaying leaflets on notice boards. This is to urge them to commute by bus, cycle and walk where possible. As we know, a large number of IT professionals are among those who are owners of private transport including cars. However, some of them have started travelling in public buses and on bicycles", Manju George of ESAF, shared. 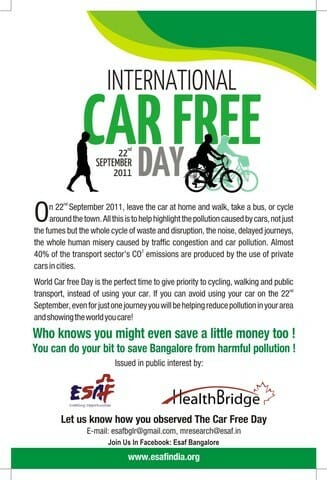 ESAF appeals to citizens of Bangalore, to join this initiative by not utilizing cars or at least look into the possibility of car pooling from/to one’s home if no alternative is available. It also encourages people to further this idea for its several advantages such as:

ESAF’s note conveys "Let us enjoy a calmer day and protect our Mother Earth a little!"