When we were children, the term ration card (or family card) meant something crucial for survival. From our family’s short stint in Mumbai, I recall that it was mandatory for school admissions too. Well, it was perhaps because it was the only acceptable document that proved the identity and location of a person and his or her family members – not many had passports, telephone connections or driving licences. And there were no voter identity or income tax PAN cards then! Further, the gas connection was usually in the name of either the husband or wife. Importantly, the family card was the only means of obtaining sugar. We got this after standing in long queues or jostling one’s way through the crowd at the local ration shop (or fair price shop) of the public distribution system (PDS). Later, my mother would lend the ration card to our domestic worker for her to get kerosene and probably food grain.

Very often, getting a new ration card especially for the first time was a Herculean task. It seems to be the same in some parts of the country even at present. But in Bangalore, it does not seem so bad. Further, many belonging to the middle or higher income strata formally known as "above poverty line" (APL) do not have the need for it. Some of these people therefore do not bother to apply for one while others require it only as a means to prove his or her identity or address. Small wonder that there is a procedure for securing an ‘identity only’ ration card.

Situation on the ground – BPL and APL

However, the reality of the poor in this context seems to be different as in most others! A quick conversation on this subject with our household helpers is enough to prove the disparity on various fronts. Many of them need a ration card to procure their monthly supply of food grains, kerosene and sugar as they can barely afford to buy these commodities outside. After all, they often belong to the "below poverty line" (BPL) category.

Although some of them may have a television set or mobile phone handset, these are not indicators of their standard of living. these may be hand me downs or ones that they purchase on credit. So it may be unfair to have this as a condition to decide whether a family is BPL or APL. However, the government has identified these appliances among the criteria to determine the economic status of a family. Many social workers feel that those factors are unrealistic. The ones who have themselves certified as BPL are issued a card (coloured yellow in Karnataka). But it is quite possible that are actually way above the poverty line. The vice versa is also true. Further, low income families that are classified as APL but may have slipped into the BPL category also find it very tough to prove their family income status and secure BPL cards. 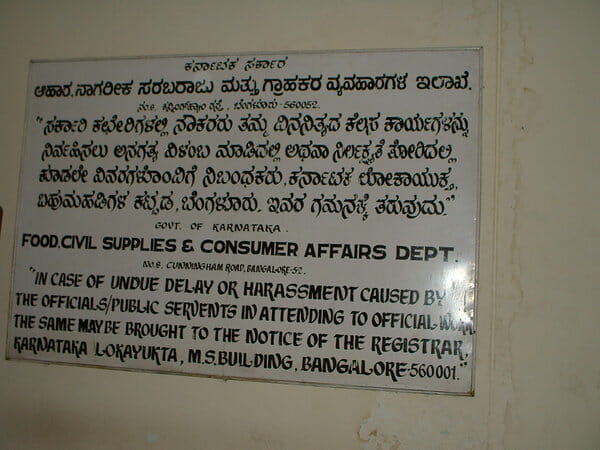 In letter but not in spirit

Shanta (name changed), is a worker in the unorganized sector in Frazer Town. A couple of years ago, she attended a meeting that the FCSCA department organized in her neighbourhood. "During the discussion, one of the officers advised me to contact the local bank to obtain the necessary documents for a ration card. I paid Rs. 500 and submitted the completed form to the FCSCA office and also have a photocopy of it. However, I have not been able to get her family together for the mandatory photograph at the designated office", Shanta told this writer. This has denied her family a ration card. The last is a realistic problem that most low income families face. Further, many of them find it a challenge to provide evidence of their household income or address. Of course, valid voter identity cards serve as a "proof of address".

People such as Shanta are compelled to buy rice, wheat, sugar and kerosene at much higher rates than they can afford. Shanta has observed members of her extended family and others with BPL or APL cards obtaining rice as Rs. 3/kg and Rs. 10/kg respectively. She finds the lower priced variety better. Importantly, her small single room house that is similar to many others has a television.

Geeta Menon is the co-founder of Stree Jagruti Samiti (SJS), a Bangalore based NGO which has been successfully campaigning for the rights and entitlements of women domestic workers in the city and a few other parts of Karnataka. She shared details of the ordeals that some women from low income neighbourhoods of south Bangalore faced when they applied for BPL cards. First of all, their forms were not accepted. "In October 2010, we approached the then commissioner of the department of food, civil supplies and consumer affairs (FCSCA) in the government of Karnataka. He apparently told us that new cards would not be issued as existing bogus/duplicate cards need to be eliminated. He had also revealed that the department did not have sufficient funds to print cards", Menon said. She added that in areas such as Venkatapura (in south Bangalore) and Muddamma Garden (in north Bangalore), the BBMP councillors of the corresponding wards had assisted local residents in obtaining BPL cards. According to her, the corporators had been assigned a mandate to help extremely economically backward to secure BPL cards. 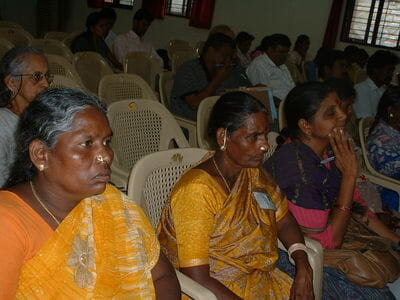 CIVIC, is a(n) NGO which has been involved in highlighting various issues prevalent in some low income neighbourhoods of Bangalore. It is working with people living there to resolve their problems through its area co-ordinators such as Ramamurthy K V who is associated with Rajiv Gandhi Nagar in Devasandra (ward 55) in K R Puram. In his knowledge, only food inspectors are involved in the validation of addresses. However, as there around thirty five thousand people under each of these officers who have very few support staff members, it is impossible for them to verify the actual location of each new applicant individually in a timely manner. This seems to be the primary reason for the three year backlog (no new applications have been accepted after 2007). Ramamurthy also reminded me that the government admitted that COMAT, a private firm which was entrusted with the computerization of ration card data has been unsuccessful and also introduced new problems.

Although the FCSCA commissioner’s office says that new applications for BPL cards are being processed, it is unwilling to provide a written commitment about this. As per Ramamurthy, the potential BPL card applicants have been advised to wait for five years when a new government order (GO) will be passed regarding the issuance of BPL cards. He states that this is in violation of a relevant Supreme Court order. Further, this is also in conflict with the Food Security Act (or Right to Food) which identifies the consumption of meals for sustenance as a fundamental entitlement of every Indian. The legislation also mandates the provision of access to food. CIVIC is filing RTI applications to know the status of pending submissions for ration cards.

Apparently, the FCSCA department has said that it will only replace bogus cards which are identified by CIVIC. "This is the responsibility of the government, not ours. Why should false cards even be issued?", Ramamurthy asks. In his experience, it is often the local MLA’s who decide which persons/families should be provided BPL cards. During elections, these politicians overlook all criteria stipulated by the government for APL/BPL classification. Further, many ‘fair’ price shops usually stock up to five hundred invalid BPL cards to channelize commodities unlawfully. Or stock inferior quality of food grains. There have been instances when area vigilance committees have reported such discrepancies to food inspectors. However, when the latter go for verification, they find nothing. It is obvious that the shops receive notification of this soon enough to replace their stocks or hide the bogus cards.

A relevant aspect is the functioning of vigilance committees. Although these bodies exist in different areas, they do not meet regularly i.e., once every 2 months. However, the ration shops which are supposed to maintain a record of the discussions sometimes forge them to satisfy food inspectors. Ramamurthy of CIVIC finds that the fair price shops in Rajiv Gandhi Nagara are an exception as their owners support the activities of the vigilance committees. According to him, the government has framed criteria for membership of the committees but has not defined the roles and responsibilities of the group clearly.

Helpful only to some?

Persons in higher income categories do not always apply for a ration card. Even if they do, it is usually to use it as a document of identification. Some of my friends and acquaintances have hardly thought about procuring a family ration card. I have also refrained from doing that due to the probable procedural wrangles although those seem to have been simplified and speeded up. Sadly, this is not so in the case of those who need a ration card the most.