They ensure that we are well fed and clothed. But sometimes do not enjoy these privileges. Actually, some of them barely survive. Or do not all. I am referring to India’s small farmers who commit suicide.

So why do our agriculturists and sericulturists take their lives? As they are often deep in debt. Is that all? Insufficient availability or access to institutional credit, i.e., minimal bank loans is a major cause. Unfortunately, banks which were set up to support poor farmers, do not! So the agriculturists borrow from private moneylenders and microfinance institutions at high interest rates.

Many of the dead farmers were men between thirty and forty years old. Their wives often fend for themselves, their young children and old parents-in-law and perhaps the late husband’s siblings. But as most of these women do not possess pattas (titles) to the land, there are cases where they are expelled from their marital home by the husband’s relatives. Sadly, some of these women are unwelcome even in their maternal households.

Renowned journalist P. Sainath, presently, Rural Affairs Editor, The Hindu, has been highlighting these heart rending facts for long. His writings and talks inspired film maker Deepa Bhatia to capture the agrarian crisis in a poignant manner in the film Nero’s Guests. After a screening of the documentary that revolved around Sainath’s work, by Maraa (a Bangalore based community media collective), Vikalp (a non-profit organization creating films on human rights and social justice issues) and Concern (a volunteer group) at the Indian Institute of Science, Bangalore on 3rd March 2011, the Magsaysay award winner interacted with the packed audience. Reiterating that "Inequality is the fastest growing sector in India", Sainath expressed his disappointment that the union budget for 2011-’12 reduced or removed various subsidies for small agriculturists and the economically marginalized while increasing the benefits for the corporate sector and the wealthy. He opined that this would affect the former drastically.

Many of the dead farmers grew cotton, coffee, pepper and some food grains. However, a recent incident in Valagere doddi, a village in Karnataka’s Mandya district, may add silk to this list. On February 28 2011, the country’s finance minister announced a decrease in the import duty on raw silk from 30% to 5%. Therefore the price of this perishable commodity fell by almost a third, hitting sericulturists’ anticipated sales.

Vasanthamma, the 28 year old wife of a silk farmer named Swami Gowda realised that she would be unable to repay her high interest loan of nearly Rs 1,20,000 obtained from a local self-help group. She hung herself and so did Gowda, fearing creditors. They left behind 3 little children Chandrika (5 years), Kirtana (3 1/2) and Sharath (2) among whom only the oldest understands that her parents have passed away.

The kids are in the care of Vasantamma’s mother, Chowdamma and Swami Gowda’s father Bore Gowda who are old, financially backward and still in shock. Although the local tehsildar visited the bereaved, no compensation has been announced.

1. The government must provide Rs.10 lakhs compensation to the victims’ family and take responsibility for providing educational and employment assistance to the children

2. Revert the status quo on the import duty for raw silk by reinstanting the 30.66% import tax

3. Strengthen Karnataka Marketing Board Silk (KSMB) and Karnataka Silk Industries Corporation (KSIC) through adequate financial support to intervene in the market at the time of such price crash

Brief reports about this tragedy in some English dailies also disturbed some Bangalore based IT industry employees united under the banner of IT and ITeS Employees Centre (ITEC) and volunteers with non-profit organizations/groups like AID-Bangalore, Concern IISc and Sugathi. Among them, Hari Shankar of Pedestrian Pictures, Nidhin Sasi and the latter’s friend visited Vasantamma and Gowda’s family in Valagere to understand the ground realities and prepared this insightful document. While Nidheesh V Chittur and Naveen Mundunuru of ITEC accompanied a Kannada TV channel crew to Valagere Doddi, Senthil Sundaram, his wife Bhagyalakshmi (both AID-Bangalore volunteers), Jayakumar H S, Sowjanya, Asha Kalari and Raghavendra Selvam (all ITEC members) shared their angst through the mainstream media, phone calls, text messages, blogs and e-mails. Mayank Rungta of Bangalore Bikers Club (BBC) and Gurumurthy Matrubhootam of AID Bangalore arranged for the film show followed by talks at some IT companies and local colleges. Shubhankar Chakraborti, Soundarya Iyer and Prathamesh Turaga of mobilized IISc students’ involvement. Incidentally, many of them had heard Sainath lament the government’s failure to back small farmers during and after the film Nero’s Guests. 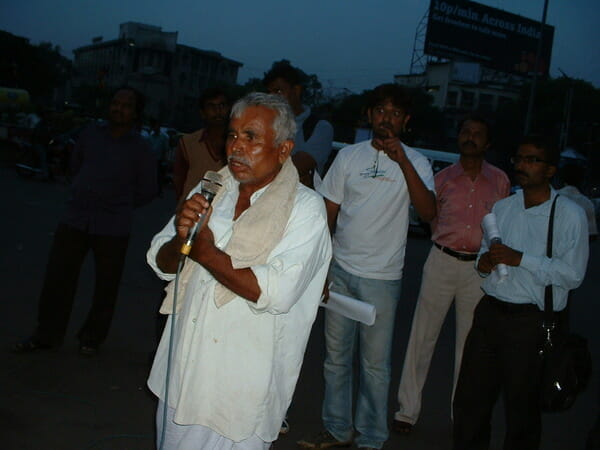 Bore Gowda appreciated the solidarity despite his grief

Over a hundred people from ITEC, AID-Bangalore, Concern IISc and Sugathi accompanied by a few of their kids and various supporters assembled at 4.30 pm on 26th March 2011 gathered at Bengaluru’s Mysore bank circle. They included Yashwant, a silk farmer and activist from Maddur taluk and an insurance sector employee who travelled from Mysore. Expresseing their solidarity with poor farmers through placards and slogans like "Halla Bol", "Import reshme bedave beda" and "Indian government, shame, shame!", the peaceful procession reached Town Hall. There, ITEC’s Vibha Mishra, Mangat and others staged a powerful street play depicting how banks chase the wealthy while denying credit to farmers. Krishna Gowda of KPRS briefed the crowd about the problem, demanding, "The government must reverse the import tax cut on raw silk". Everyone present was moved by the anguish on Bore Gowda’s face and his quiet dignity.

The crowd lit candles to Nikita Gandhi and her friends’ rendition of the soul stirring "Le mashalein chal pade hain, log mere gaon ke" (We are marching with torches, my villagers). Geeta Menon of the Domestic Workers’ Rights Union and Stree Jagruthi Samiti said, "Labourers in rural and urban areas encounter similar challenges". Nirmal Kumar, Haynes Davis, Mudassar Khattab of ITEC and the rest are doing their utmost to raise awareness about the plight of the kids of Vasantha and Swami Gowda and the root cause of the problem. These people hope that it would pressurize the state government to act. "We are not like Nero’s Guests", they say with the conviction that policies which favour the private industry are driving the economically backward to their death. 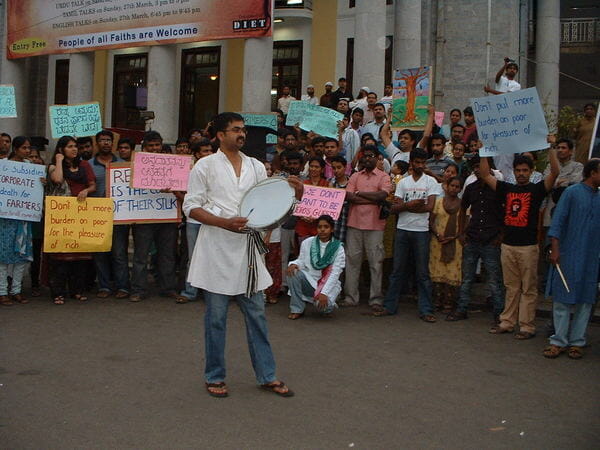 If you want to visit farmers in Mandya on 16th and 17th April, join this Facebook group