Noticed a group of energetic, charming ladies with warm smiles and welcoming voices convening in East End Circle (Jayanagar, 9th block) on Saturday afternoons? If yes, they may be the empowered women from Stree Jagruti Samiti (SJS), a collective of domestic workers in Bengaluru. Around since the late 1980’s due to the tireless efforts of Geeta Menon (one of its co-founders along with social worker Rita Roy) and various supporters/associates like APSA and SICHREM, SJS has campaigned for labour rights, dignified treatment, benefits, etc. With 1200 members and a part of the Domestic Workers’ Rights Union (DWRU), it has spread its wings in Bijapur, Gulbarga and Bidar from 2007 onwards. Working as housemaids, cooks, babysitters, etc. in Byrasandra, Nakkalbande, Ragigudda and other sprawls of south-east Bengaluru, these daughters, sisters, mothers, grandmothers and friends are an inspiration to many including me. And observing, interacting and learning while assisting them in small ways has been among my favourite journeys that began in 2005. 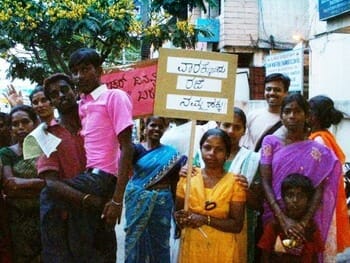 Among the first to join SJS in Bangalore was Arumugam, a worker who enrolled more than 10 years ago. The unrelenting Muniyamma, Nishat and Lizzie who spearheaded the movement in their home/work areas have been involved since 2000. They have highlighted their struggles through smaller local groups and networks in different parts of Bangalore. The fiery Shakuntala (Shaku as she is fondly called) arrived in 2002 during the adolescent girls’ programme. In 2004, these spirited women organized public sittings and hearings on issues like right to livelihood, identity, etc. which drew more ‘fellow’women into the fold. They have been fighting not mere discrimination but its use as a patriarchal weapon by the state and society. One of their main objectives is to emancipate marginalized women and address their problems at home, like the availability of water supply, sanitation, the Targeted Public Distribution System (TPDS) and at work such as remuneration, leave, employer’s conduct, etc.

Importantly, SJS has also helped rescue and rehabilitate child labourers and aid children of housemaids. Further, its women and youth have organized children’s science clubs, child rights awareness campaigns and adolescent girls’ and women’s workshops by themselves and through volunteers from groups like AID Bangalore. Most kids are girls between 10 and 16 years studying in government/aided schools while the domestic workers are women primarily aged over 20 like Pushpa, Kasturi et al. And there is the dignified Rukminiamma whose commitment belies her 60 plus years (she doesn’t know her age) and has never missed an activity or meeting since she joined in 1999! Unable to commute long distances or secure employment elsewhere, she earns a paltry Rs. 350 per month at a house in Tilak Nagar where she started working at Rs. 5 every month over 35 years ago. 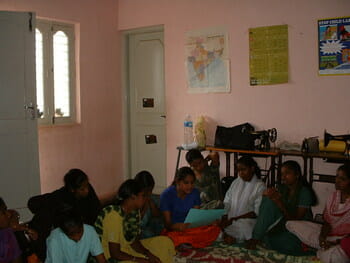 In 2005, SJS did a revealing study on the minimum wages of domestic workers in Bengaluru and proposed some revisions based on the Indian constitution. The next year it facilitated hearings on ration card holder issues in Byrasandra, Nakkalbande, Ragigudda and Corporation slums following several complaints from women residents regarding the TPDS and fair price depots. It also published a report on the results and recommended resolutions.

SJS has a sourcing system in South Bangalore providing household helpers to whoever needs them. It also works at an individual and collective level to tackle domestic violence and marital and parental household abuse of its women. It has been aiming to break the culture of silence and subjugation and give visibility to the vulnerabililty of women who are often the lowest in the labour hierarchy. SJS uses a rights based approach to address the socio-cultural and economic problems governing the women’s lives.

One of the things about SJS that has fascinated me is the harmony with which the women and children celebrate Ayudha Puja every year. I’ve known inter-faith gatherings, communities and festivals. But to me, nothing has been more unifying, revealing and touching until now. I believe that the energy in the photos would better communicate the essence of these women’s lives and what they represent. 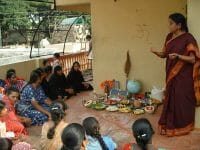 Celebrating our Work. Across Religious Divides, The South Asian

Minimised by the law, India Together