A colourful construction site. A few workers. Some children. A park with walkers inside and outside. Kids playing on the road and the school playground nearby. Fairly silent residents. Some cars and motorbikes moving or resting. It was a Sunday afternoon in New Thippasandra (ward no. 83) flanked by the busy and colourful market and the seemingly clean and green CV Raman Nagar Road dusty with vehicles. Aliya, little Mahruk, Prayas (the initiator of Spirited Caravans, a journey of mobile spaces offering glimpses of a friendlier city) and I walked around for 2 hours observing, imagining and recording…

There were the wandering cow and rag picker. Each doing his/her thing slowly. Seemed aware and oblivious of their surroundings simultaneously. And the thinker puffing under the tree. Will this canopy be around when we go there next time? Only the government knows! Lonely rocklets (small rocks eh?). The Bisleri bottle disturbs their beauty. An ‘ancient’ bus shelter – no bus routes or billboards. Is it abandoned? And the little boys on the vacant land making merry with their cats. Unlike their ‘guarding’ parents who felt insecure with our cameras. A tree stump. Who felled it? How, when, why? Only a ‘sign’ of bike repair behind the empty sugarcane juicer.

A dense patch of fenced green. With some junk thrown in. How we love littering. A vintage car having a modern registration number. Nice to be up to date. Some eco-friendly houses…on tree lined lanes. I hope they remain. A small grocery store (where we stopped for her soda and my cookies, er… cool drinks and biscuits). The lady welcomed us warmly. Thum(b)s up to the little ‘glass’ bottle. But when did start costing Rs. 9? A Kerala fried fish stall. Smelt yum to vegetarians too!

On to the Thippasandra (BEML) Main Road. Halted at Shiv Sagar for Rave Idli and Badaam Milk. Same quantity and quality for nearly double the price as last year! A pup feverishly searching for a bone. An ox tied to a tractor. Sand, cement and bricks all around. Fowl snapping their wings furiously inside their smelly cage. Footwear and clothes for sale on the footpath. A closed tea stall. Unlike the adjacent ‘dahi mandi’. Empty mobile garbage cans at a street corner. UAE and Hong Kong milk shakes at a juice shop which Aliya couldn’t taste. No ‘power’ madam. Teenagers relishing Bhelpuri off a cart. My mouth watered but stomach objected. Will all these survive the onslaught of the many mundane sights, sounds and smells that reminded me of disparity and divide? 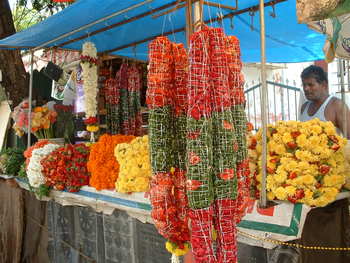 En route, I spoke to a florist, a coconut seller and a fashion accessories man. All street cart vendors who readily posed for photos and shared their stories. Govindaswamy and his wife Ratna have been going to K.R. Market around 4.30 am every day for ten years to buy flowers worth Rs. 2000 which will wither if they don’t sell them on the same day. That seems like a huge amount but they need it to support their family and cover all work expenses (credit, transportation, preservation, etc.) Apart from garlands and flowers for worship/offering, they supply bouquets to a few private companies although their regular customers have dwindled. Govidaswamy was a rickshaw puller before age and technology caught up with him. 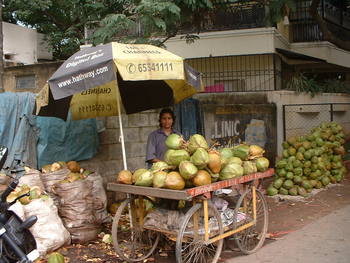 Lakshmi who quit seven years after toiling in the garment exports industry buys coconuts for Rs. 600 from Maddur every week. Her sales drop with the rain but she must pay Rs.100 daily to the cart owner. The thin overcoat which she seems to have saved from her previous job barely protects her from the vagaries of the weather but doesn’t stop her from smiling warmly. Rajan has been selling affordable bracelets, bangles, hairpins and colourful for nearly 2 decades. A leading daily newspaper published his picture sometime back. They or their ancestors migrated from Tamil Nadu ages ago. The economic downturn has impacted all their livelihoods badly. But their spirits seem intact. Do they have a choice? Probably not. I plan to find out more some day.

Back to the site where kids from the neighbourhood Low Income Group (LIG) Housing Colony were busy modelling with clay. Most of them were intent on making Ganesha in all shapes and sizes while chattering happily in English, Tamil, Kannada, Urdu, Hindi. Dina and Markus suggested creating a village scene. A few of them perched a plane atop a tree saying, "That happened in Andhra’s Nallamalla forest recently, Akka!" while Prayas captured a little boy’s story. 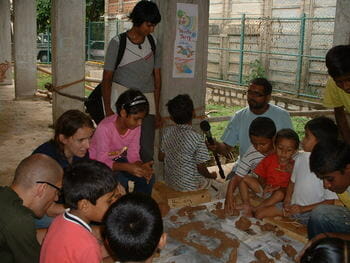 All of them had been playing, singing, drawing and enjoying themselves on the Spirited Caravan for almost a month. With their fellow travellers and visitors like me. ⊕