"Please, please, mera change vaapas keejiye, please sir." She was in her thirties, nicely dressed in a blue churidhar with a gold-ish lining, spectacled, and worried.

Furiously issuing tickets, the uniformed BMTC person she was pleading with was in the far upper corner of my favourite red monster 500 C. The bus had already stopped at  Marathahalli and departed. She panicked that she had not gotten her change back and had missed her stop.

This conductor, middle-aged, spectacled, unusually chubby-cheeked, had not even heard a word of her plea. One of us fellow passengers called out to him. In the meantime he had forgotten a Rs 15 he had taken for some other ticket. It took him a full half minute of a speeding Volvo’s ticking time to get that right. By the time he rushed back down the bus towards her, she had plea-yelled two more times.

"Eshtamma?" he asked, knowing full well she might not understand the words, exactly. Then he switched. "Kithna dene ka hai aap ko?"

"65 rupees", she said, "please jaldi deejiye, mera stop gaya". He fished out the money and gave it to her and then forgot she was already standing at the low floor central door. 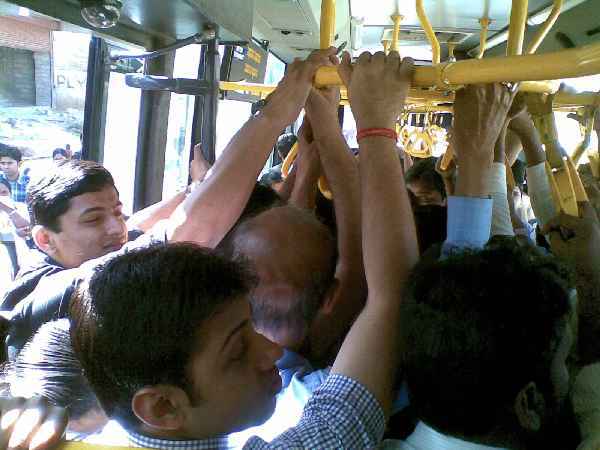 The harsh morning sun races in with commuters as the 848am 500C gets packed near Marathahalli. BMTC AC Volvos, called the Vajra service, is now popular with the well-heeled working crowd. Pic: SV.

He did not ask the driver to let her off. "Please door open keejiye, please, please", she nearly screamed. No reaction, almost as if he did want to.

Some fellow passengers directed their yells at the driver. "Back door open!" Telegraphic commands are often issued by commuters in buses to cut short time taken to utter complete sentences. The central doors in the Vajras are called back doors since they are at the ‘back’ with respect to the one in front.

The driver did not stop the bus and open the door. By then, fellow commuters with any empathy had taken in the mildly charged atmosphere. It took another screech from the lady and then the conductor yelled at the driver from the back of the bus to stop. "Door open maadi; ellithare".

And that was it. The bus stopped right there as it was about the enter the ring road from the slip road at the Marathahalli junction. It turns here from the Whitefield Road before proceeding to Agara near HSR Layout.

Relieved, the lady got off and ran back.

Within seconds, the bus ‘atmosphere’ chilled. as if nothing had happened. Everyone back to normal. The red monster thundered to the next stop barely 50 metres away.

In those two minutes of tension I heard the word ‘please’ uttered nearly a dozen times. I wondered what may have happened if it had been a meaner commuter or a rougher male. Altercations galore happen on BMTC buses especially on getting change, and 65 rupees is no small matter.

Language itself is key issue. Once on the front side of the bus, a high pitch wordy duel broke out betwen a returning woman commuter and a conductor who were across the language divide. The lady was speaking in Hindi, making no attempt to get help from any fellow passenger who could speak Kannada. The conductor pounced on her for speaking repeatedly in Hindi, and released his volleys.

I was witness to a different eruption in a tin box in Kadugodi, north of Whitefield one evening. This one involved men. There was no "please, please" at all here. It was the same ‘give me back my change’ demand. A Hindi speaking person yelled to join cause with the commuter who was asking for his change. The conductor asked him to speak in Kannada, and the supporter-commuter yelled back, "I’ll speak in Hindi, you listen". A melee was about to break out.

One Kannada speaking passenger immediately stood up and supported the conductor. He yelled at the Hindi-speaker, "Ivaru KSRTC union avaru appa, nodi neevu", referring to the ‘powerful’ union status of the conductor. How direct, and how political, I thought we Indians are when it comes to linguistic and ethnic lines. Clearly, a flexing of collectivism happened there.

Luckily, other passengers intervened and it cooled off, like it happens many a time. Sense eventually prevails, eight out of ten times, perhaps.

I have seen time and again, people from the North, simply assuming that Hindi will work in Bengaluru. True, we are ‘comopolitan’ and true, Hindi works and works well in many parts of the city.

But Bangalore is not BMTC. BMTC is after all a sarkari company and it’s unions have a language element in them, just as unions of every other transport corporation in the country. Try talking Telugu in BST buses in Mumbai.

But Telugu or Oriya or any other language is not equal to Hindi, you might say. That’s the problem.

There is an undercurrent of social hierarchy in many an assumption we make in Indian public life. Social hierarchies breed tensions one way or other. One reason Hindi is even attempted here by our fellow Bangaloreans from northern states is the feeling that it has become a defacto ‘national language’ in those states. And that makes it a level above in the linguistic hierarchy. Hence they feel speaking Hindi is legitimate in Bengaluru. (Going by the Constitution of India, we do not have a national language. Hindi and English are ‘official’ languages.)

There is not a whole lot of preaching I am going to do on this post on what needs to be done to fix all of this. For most Bangaloreans in public transport, these altercations and loud disputes seem to have become a way of life. We do watch intently when a scene bursts forth. Most simply hope it will go away. And when it does, we consign our thoughts to the trash folder of our memories and let go.

Yet, there are things one can do.

1. Try bus passes if you are more than 15 days per month on the same route, especially if you commute both mornings and evenings. Some commuters return in office taxis, and that makes them less interested in passes. Still, I feel less people seem to be buying passes than is the potential.

A volvo pass pays for itself in 17 working days. A day pass on the AC buses (excluding airport Vajras) is Rs.100 today. The monthly pass is Rs.1700. So after 17 days, you ride free each day you take bus. This math though works only when your commutes are at least as long as 15 kms or more. For instance, ITPL to Bellandur.

Even if you use a two-wheeler or car on the other days, the pass will have still saved you trouble for the days you used it. It is the surest way of getting rid of the change problem. Life is so much easier. You can swing in and out of any bus you like through a whole month and use the system even on weekends. It is simply impossible for either BMTC conductors or commuters to have the right change all the time.

2. Learn a little, if not a lot, of the Kannada language. It is actually not that hard. We Indians are already born capable of speaking three or four languages. We forget that outsiders to India get intimidated!

An aside: When my wife Savita and I travel overseas, we’ve always tried to learn the basic lines, and most importantly numbers. Numbers are more useful than one thinks. Spain, Egypt, Greece, Peru, etc. It’s the same everywhere, local language helps.

Recently we were in Turkey. This time, we messed up and forgot to do the basic run-throughs of Turkish and its numbers. Somehow we figured Istanbul was Europeanised enough and that English ‘would work’. We discovered that the Turks in Istanbul tolerate English, they do not necessary appreciate speaking to tourists in English automatically. In smaller towns, English does not work outside the tourism circuit at all.

In Istanbul itself, one lady at an art centre for the Whirling Dervishes Islamic sect hung up on me when I called to ask the time of a show. In that moment of confusion, I realised with regret that all I would have needed was Turkish umbers to understand the timing of the show she was trying to convey. The Turks are nice people, just that they talk Turkish, no surprise there. It’s a neat English-like script (not Arabic) and sounded very easy to learn, actually. Plenty of Hindi like words.

Back in Bengaluru, from Whitefield to Silkboard, we’re nice people too. A microscopic amount of Kannada will help open a conversation with receive some warmth at the other end. Almost all bus conductors here know Hindi, it is not that they do not. And they speak it whenever they feel like. Some even don’t approach commuters with Kannada anymore. I’ve seen tolerant red monster conductors simply open ticket-calling conversations in Hindi just assuming from the looks of the commuter that he’s from ‘the north’.

It’s just how we sound to each other that gets us off on the wrong foot.⊕

About Subramaniam Vincent 0 Articles
The author has not yet added any personal or biographical info to her or his author profile.