In two years, I have gone from experimenting with public transport in Bengaluru to becoming a full user. I use the bus system almost 4 days a week, and carry the second most expensive bus-pass BMTC has to offer.

Riding Bengaluru’s bus system gives you a interesting vantage point into city affairs that I thought I would write about regularly starting with this post. 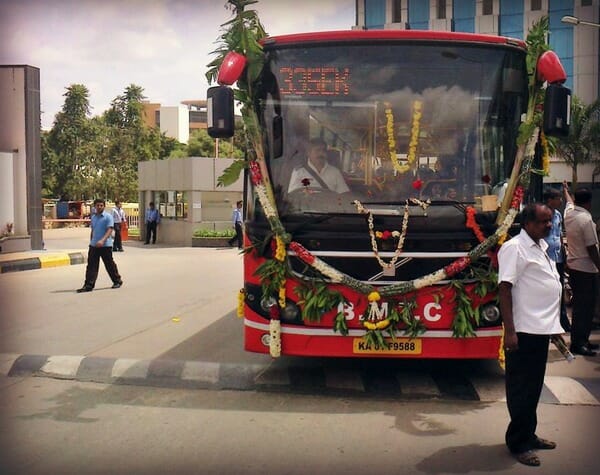 First off, I developed a few nicknames of my own for the types of buses in Bengaluru. Even though BMTC has several types, I’ve simplified this here for making my point.

Tin boxes: These are the normal BMTC buses you see, painted light blue and white. They remind me of a Telugu/Tamil term I used a lot during childhood – ‘thagara dabba’. Yesterday I saw one bus on Bellary Road; it was so battered and that it almost looked it had just come back from a war zone. The frontside had it metallic frame hanging loose, several nails were missing. End-to-end the bus was full of dents and paint rubs, with bare metal visible all around.

In fact most BMTC buses, to start with, look terrible. I have no joy in saying this, as a user. They do not inspire a feeling that the ‘paying public’ in ‘public transport’ is worth a littIe more dignity. It’s like a few sheets of tin were placed on a chassis, and a metalman hammered in a hundred rivets. Some drivers and conductors will tell you that "for our public, better these buses, otherwise they will mangle and rip off the seats in the better buses". I’m not getting into that here.

Red monsters: These are our smart-looking Volvo buses. BMTC uses them for its AC-class Vajra service. They thunder down the ring roads with drivers almost wantonly scattering and scaring people. Most car or two-wheeler drivers are not likely to want to be near an accelerating Volvo on the ring roads. These beasts are far quicker than their size would give away, and in the hands of aggressive BMTC drivers they ride like monsters. The drivers wield these buses like two wheelers sometimes,I feel, braking and accelerating at will, almost. That is why I felt ‘red monsters’ is apt.

By and large though, these buses represent the modern face of BMTC, be that as it may that the stark inequity in Indian society is clearly mirrored in the ocean of difference between the tin boxes and red monsters. The red monsters are also far easier to get into than the tin boxes, because the central entrance to a Volvo is a clean low-floor pathway and that helps.

If you live and work along the IT corridor between Whitefield-Kadugodi and Electronic city-Banashankari, chances are high you use the Outer Ring Road, and you would have seen tons of these red monsters. Between Hebbal and Silk Board on the eastern flank of the Outer Ring Road, there is almost one every 2-3 minutes during day time. These are the 500-Ds, 500-As and the less frequent 500-Es. Between ITPL and Silk Board/Banashankari, it’s perhaps one every five. These are the 500-Cs and 500-NAs, with the less frequent 500-Ks and 505.

Here’s the worrisome part. BMTC is milking the IT corridor, clearly. The Volvos are packed to no end on the ring roads during commute hours.

The abandoned western flank of Bengaluru

But if you travel in the western flank of the city any given day, you’ll see that there is a stark difference. Hardly any Vajra buses can be seen. If you are in Hebbal and need to go to Kengeri, try your luck and you’ll see.

I know the folks at BMTC will have their sarkari reasons. They will say ‘software avaru illa saar aakade’, almost as if to say only the ‘software avaru’ are able to pay for the Vajra services and since most live and work on the North-East-South sweep of the city, the rest can just be dumped. 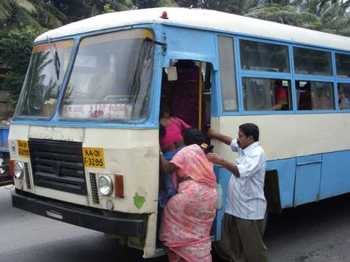 But here’s the basic deal: when the extended version of the 335-E (Kadugodi-Majestic) was launched as 335-EK from Hoskote-Majestic (through Kadugodi) the gated communities along the Whitefield Hoskote Road were happy. Commuters felt they could access the rest of Whitefield-Brookefields and the city on an AC-class bus without having to ride to the Kadugodi terminus on a tin box! Everybody also assumed that the at Hoskote terminus itself, being a rural headquarters and what not, there would not be many takers.

Here’s what really happened. Within weeks of running, and I have counted this time and time again, the EKs come almost 60-70 percent occupied even before they reach Kadugodi. I have also seen several people have gotten in from Hoskote itself. And they are not ‘software avaru’.

A well known Bangalorean and I were chatting on a walk the other day about this, and he quipped: "Who doesn’t want to use a Volvo?" That should sum it up for BMTC. There is an aspirational graph all around, and independent of that, affordability extends beyond our ‘software avaru’. BMTC should simply run its red monsters at far higher frequencies along the western flanks. Ridership will simply come if there is visible predictability in service.

Having said this much, let me add this: In the red monsters, I’ve spoken to ‘software avaru’ from Pune, Jaipur, Delhi, Mumbai and Calcutta who have relocated to Bangalore or are here for a few weeks to a few months. They unstintingly say BMTC is doing a better job in transporting people than their own cities. I think it’s also the reliance on the red monsters carrying long-haul commuters that is coming out here.

As for me, I’d like all the old tin boxes to be replaced by the new, much better looking non-AC Marco Polo ones, first. Much nicer buses, more decent looking, and you feel like getting in.

For the time being though, I have a simple formula. If you are already using the Volvos and hesitant to jump into a tin box, take the latter as a feeder to red monsters. For the most part, it works well!

In the coming posts, I am going to write about the pickpocketing ring operating in the Volvos on the ring road, how women handle these buses interestingly different from men, the kinds of language disputes and comedies that break out regularly, and more. It is all in a day’s journey for most people. There will be the occasional "quote" from BMTC too, and a few policy pokes, why not.

About Subramaniam Vincent 0 Articles
The author has not yet added any personal or biographical info to her or his author profile.