Two different heritage-related events took place last weekend. The first was an INTACH Parichay which took place on Saturday, 29 January, at Shivajinagar. About 20 of us gathered at St Mary’s Basilica and then gradually made our way towards Russel Market, where Mohammed Idrees Choudhury spoke to us about the market and what makes it unique. Then followed Adams square, the mews, Renuka theatre and finally the Jain temple and the fabulous Gani Building (“Shivajinagar ki shaan”, as one shopkeeper near the building called it) on OPH Road.

As walk leader Pankaj Modi pointed out, the charm of Shivajinagar lay not so much in its old buildings (which are, of course, charming) as in its diverse, composite culture and its way of life. The walk also saw some brief discussions on urban change and conflicting needs in our city, partly sparked off by Hasiru Usiru volunteer, Vinay Sreenivasa, who spoke to the group about the on-going eviction of vendors from Shivajinagar’s footpaths. 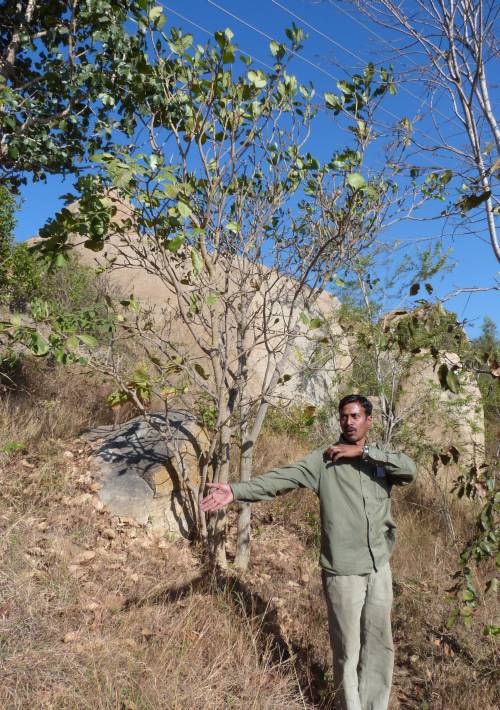 The second event on Sunday, 30th January celebrated natural heritage. Rock climbers in Bangalore have been organising a Celebrating Turahalli festival for the last few years now. This year’s festival to celebrate “one of south Bangalore’s last remaining lung spaces” was attended by about 150 people (more on the festival here.)

A youngster has a go at the so-called PhD rock in Turahalli. Pic: Meera Iyer.

Apart from rock-climbing, there was also a nature walk. For those of us who were new to Turahalli, it came as quite a revelation to learn that much of the greenery in the area was thanks to the efforts of rock climbers and naturalists who have been planting trees in the area since 1994.

Unlike the Forest Department, which has established plantations of two exotics, Acacia and Eucalyptus, in the hillock’s lower slopes, nature lovers have planted native and endemic species on the hillock itself. The nature/tree walk was led by the immensely knowledgeable Seshadri, a volunteer with Hasiru Usiru, who pointed out many of these native tree species, with factoids and anecdotes about their uses, history and names.

All in all, a fun-filled day.

About Meera Iyer 0 Articles
Meera Iyer is a member of INTACH's Bangalore chapter, and a freelance journalist writing on science, environment and history.