Till last year, I didn’t know who Paul Fernandes was, though I had seen his artwork all over Bangalore, occasionally colourfully covering up a bland restaurant wall or even an old space. I loved his work, without realising it was his work. Then, on a day walking during lunchtime, I stepped into his shop at Richard’s Park and connected all the humourous comic chronicles of 70s Bangalore I had seen strewn around in Bangalore. (And fell in love with a bag, but that’s another story). I stayed, my eyes crinkling with laughter at each of the framed posters. 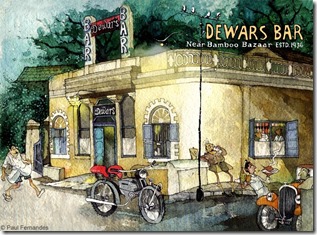 As I left, I saw a man standing outside, chatting with the manager of the shop. He looked like any old man, white beard, unassuming kurta and a khadi bad slung around his chest, standing next to a moped.  Being the curious girl I am, I stood in the circle too, chatting about old bungalows and how hard it was maintaining them. Afterwards, over lunch my friend told me that the person we had been chatting to all this while was Paul himself. I turned back as if to see him again, and imagined an unassuming man who could be missed, lost in a crowd. Everything lost, except for the satisfied smile. This was eight months ago.

Then August happened and my debut novel The Ghost Hunters of Kurseong released. In December, my graphic novel The Skull Rosary released. Two releases in the market meant a lot more of marketing. Ever since then, I have had to struggle with my writing. My time travelled between one more online update, one more connection in the marketing industry and then one more chasing the journalist who wouldn’t remember my name. In the lists of neverending tasks-to-be–done, my writing (the reason I quit my job and career in journalism), lay in a corner, gathering dust and wondering why it was being ignored.

So it was with a heavy, confused heart that I was at the Times Literature Carnival last Sunday. I had been feeling lost since a couple of weeks (my wise mother named it rat-race of the author’s world), not getting enough time to get into the blackhole that is required for creativity. Not able to switch off from the constant stream of social updates as well as public updates, that wave after wave came to my shores. Not able to back off and go back to the closed room.

Then I saw Mr Paul Fernandes, standing in a corner, smiling at the festival. The same smile I remembered from the sunny day in Richard’s Park. I headed to him and made conversation about this and that. All the time my mind was whirling, at unrest, wondering. Finally, with a deep breath, I said it. 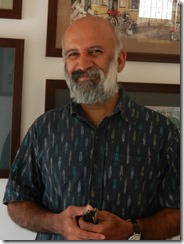 ‘Sir, can I ask you something? It’s sort of vague and personal, but I just have to ask.’

He nodded. My cue was here and my best bet was to be as expressive as possible.

‘Sir, how does one balance marketing with creative works? I mean, once there’s certain level of success, once you have achieved the first step of success, how do you stop that ambition from taking root and go back to your work? What you loved doing in the first place? Writing for me and painting for you? How do you switch off?’

It wasn’t enough. I needed more.

‘Well, I go back to my table, see all my pens and papers strewn around and then leave the world outside. I close the door.’

‘But sir, how do you control ambition? I mean I have a certain level of success, but I want more. How do I stop wanting more?’

‘But, ambition is a good thing. Just leave it outside the door when you go inside.’

Such a small conversation. It took two minutes of standing in the bustling carnival of literature, but it hit home. I left smiling, suddenly lighthearted after so many weeks of this heavy stone in my heart. It wasn’t that I didn’t know this before, but when Mr Fernandes said it, it just somehow hit home. And so I decided to close off everything, all tasks, all lists, all the world, and close the door, with only my paper, pen and laptop for company. It was hard before, but suddenly, after hearing it from Mr Fernandes, it became so easy. Thank you, Paul; for that.

About Shweta Taneja 0 Articles
Shweta Taneja is an author who loves to turn ordinary into unusual stories. When she's not creating fantasy books or asking curious questions to complete strangers, she writes no-nonsense articles. You can read more about her on www.staneja.com
Website