Invariably these days visitors to our Puttenahalli Lake in J.P. Nagar 7th Phase ask one question – what are those floating platforms in the water? Those of you who follow our updates on the lake would know that these are the Artificial Floating Islands we had first introduced in June last year. That was also when we signed an MoU with the BMS College of Engineering to test the lake water every month. Three prototype islands were joined by more. The plant species in the platforms increased and the water sampling points went up from four to seven.

The BMS reports began to show a steady improvement.  The results from site 1 (wetland) for July 2016 and 2017 are given further below along with an analysis of the results.  As laymen, we believe what we see. We see the plants in the AFIs thriving (especially the Canna and how!). We see schools of fish and birds gorging on them (and growing plump!). The eyesore in our lake was the wetland which is a crucial biofilter site but needs to be tended more rigorously than perhaps the rest of the lake since this is the main entry point for rain water. We decided to revamp the wetland which was an unholy mess with trash galore and water snakes everywhere. We came up with a plan to make the vegetation easy to maintain using the floating platforms.

BBMP cleared the area in February and then again in April. Almost at once, the entire wetland became covered with sticky duckweed. The wetland which looked like a jungle now looked like thick pea soup! We remembered that the duckweed usually kept away during the monsoon hence decided to divert the treated water into the wetland. Voila! The duckweed vanished like magic!

Since then, from May this year our gardeners have been steadily lining the entire inner boundary of the wetland with the floating platforms. Now they are in the process of installing AFIs rows within this bund. The smallest one in front of a silt trap is done. Giving enough space for a coracle, we will perhaps have three to four rows of platforms each with different species of plants. The photos in this link tell the story of our Floating Treatment Wetland:  https://goo.gl/photos/rmHGqJ1GsXai51tb7 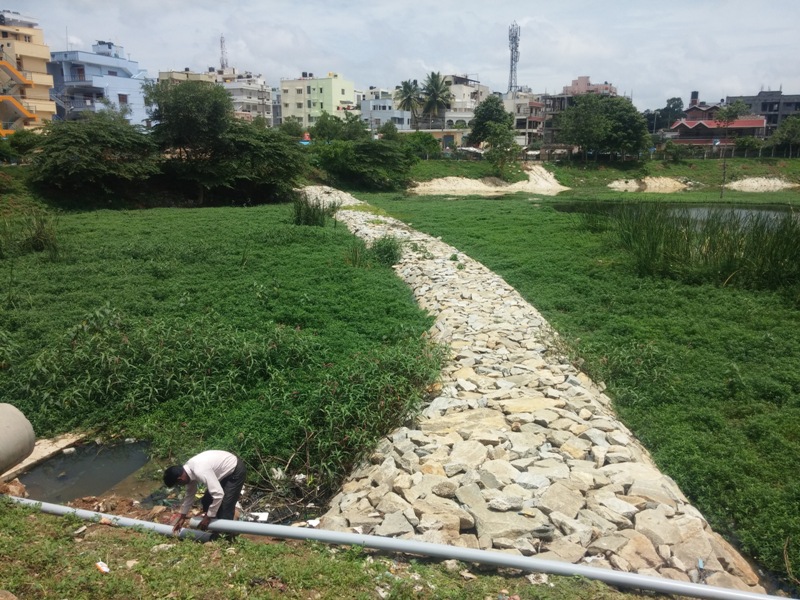 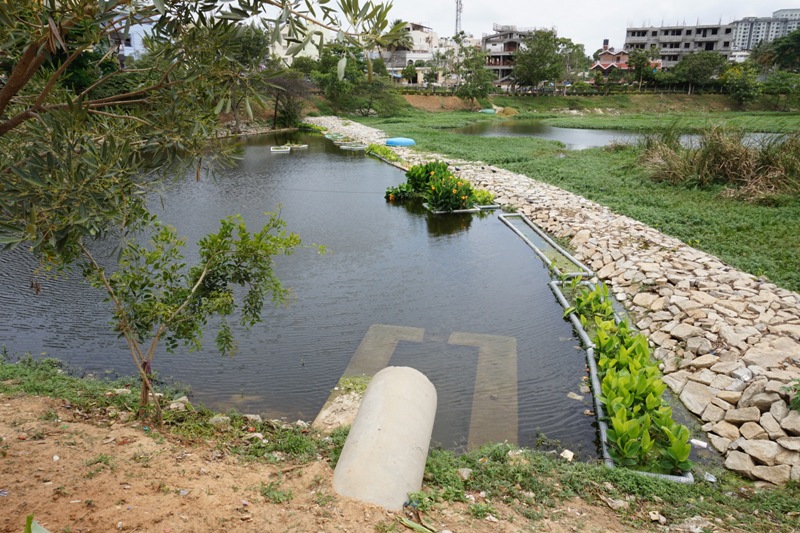 Our heartfelt thanks to our CSR partners in this project VMWare and Deloitte Shared Services India Pvt. Ltd.  Some of their volunteers made a few platforms as well. We are grateful to BMSCE for conducting the monthly water tests. Ever since we publicised the news of our AFIs last November, several lake teams have been visiting us. We are very happy to share our experience with all.

See below are the lab reports of  water sample collected from the wetland at Puttenahalli lake.

One of our volunteers, S.K. Srinivas, a pharmacologist, bio-chemist and birder analysed the results. His report is given below:

BOD (biological oxygen demand) : This is the primary indicator of water pollution. Lower the BOD level, the better is water quality.  Compared to what it was a year ago, the BOD has decreased dramatically.  That’s really good. However, since BOD of 20 mg/liter is still considered severe pollution, we have some way to go. But, really good work all the same.

Nitrates / phosphates:   Significant reduction since the past year.  In a literal sense, there is less crap in the water!

Dissolved oxygen:  Has gone up since the past year. Very good. This, I think, is due to the floating islands.

Turbidity of the water has increased marginally since what it was a year ago. We need to see why this happening. Turbid water prevents sunlight from getting through the water and decreases plant photosynthesis. It may be due to the increased traffic inside the lake, i.e, increased use of coracle for fishing and weeding. Or it could even be the fish.”