Extracts from an email from Vishnupriya Hathwar, who frequents Puttenahalli Lake
———
Just wanted to share somethings that many of you may have already observed [ or maybe not].. here goes !!
Due to the wonderful rains, the lake has filled up quite a bit, leaving only smaller islands for the birds.
In this, the most common birds- the Common Coots have chicks that are almost grown to adult size [ only the plumage is still lacking].
Spotted a pair of Coucals – appears that they too have a young one!! Spotted a small Coucal with FRESH plumage flying across the lake.
I have personally never seen a young one of a Pond Heron up close… happened to see one meek little pond heron with its drab mottles and blotches of dirty brown hiding in the weeds between the gate [entrance to the lake] and the island. 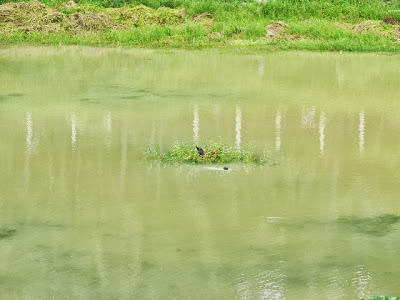 The purple swamp hens and the dabchicks [ little grebes] are not far behind in reproductive success !! some of them have chicks as well!

I am kinda missing the kingfishers and purple herons actually !! oh yes – managed to see the Pheasant tailed Jacana as well !! beauty of a bird I would say.

One suggestion – is it possible to introduce lotus leaves into a part of the lake?? This would get the Jacanas to start breeding there as well !!
I know some of us would question about the maintenance part… but that’s something we need to do all the time right??
——–
PNLIT did think of introducing lotus and lily not particularly for the Jacanas but simply for the beauty of the flowers! However, there is a fear that it will spread and cover the water. If it is possible, it will nice to have them grow in a confined space in the lake.
Over the last couple of years, more than 60 species of birds have been spotted at Puttenahalli Lake. We were pleasantly surprised to come across Golumolu’s blog post in June, about birding in Puttenahalli Lake – that can be read here.
To know more about the birds of Puttenahalli Lake, check out the PNLIT Flora and Fauna webpage, that has this carefully documented.
About Arathi Manay Yajaman 215 Articles
Arathi is a market researcher who loves to run and write. She has been actively involved in issues that affect citizens, including apartment management, waste management and lakes. She used to live in Mumbai and is now based in Bengaluru, working as a Community Anchor with Citizen Matters.
Website Facebook Instagram Twitter YouTube LinkedIn