The EMPRI office at Doresanipalya Forest Campus was abuzz from 8 a.m. on Tuesday, 14th March 2017. EMPRI staff, researchers, citizen activists, representatives from BBMP, Hasiru Dala,  workers and rag pickers, all wearing black Tee shirts waited for the signal to start off a procession. The message was simple but vital –  Say no to Plastic.

Roping in a few residents from the area, we from PNLIT were also a part of the procession shouting slogans and walking from EMPRI Office towards our Puttenahalli Lake. It drizzled. People on the road took shelter and listened to our slogans as we marched on. More people joined en route and by the time we reached the lake a good 45 minutes later, we were over 180!
We took the volunteers to the two places in the lake premises with the maximum plastic waste – on either side of the slum. Everyone started removing the plastic bags, gutka satchets and other odds and ends which over time would have done irreparable damage to the ground below.
While the rag pickers and BBMP staff were impressed with how clean the rest of the lake was, EMPRI Director, Mr. Vinaya Kumar and his colleagues were appreciative of how the lake looked – water rippling, the birds so engrossed in feeding and swimming. They were so full of appreciation of our floating wetlands that Mr. Vinaya Kumar wanted to meet our gardeners, who make the platforms. He listened keenly as Jayanna and Ramu explained to him in detail and complimented them. 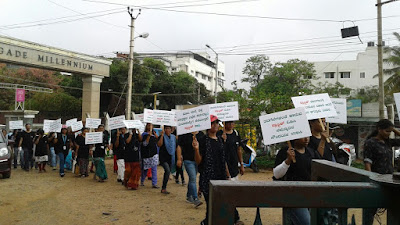 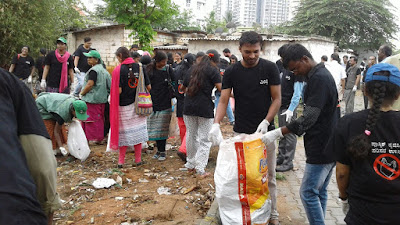 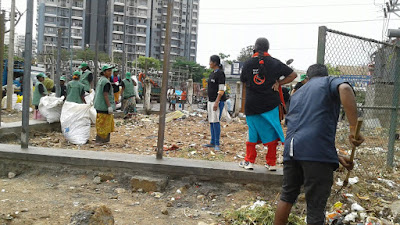 By 11 a.m. everyone gathered at and outside the Gazebo. Mr. Basavaraj, Head, Training, EMPRI thanked everybody for their participation. 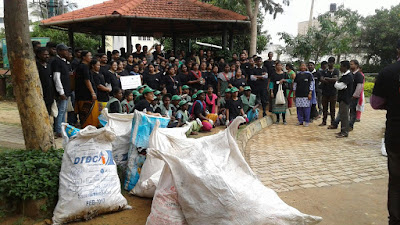 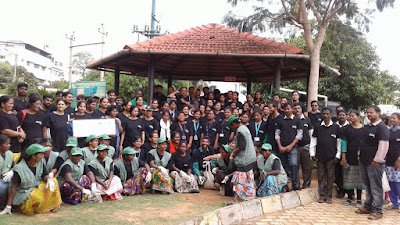 Puttenahalli Lake was their first venue to promote awareness of the hazards of using plastic. We hope to reinforce this with greater vigour not just at the lake premises but in the locality as well. If you would like to join us in this campaign, please email . We need to eradicate this evil before it finishes us off!
About Usha Rajagopalan 0 Articles
The author is a trustee of PNLIT.
Website