With the Salvinia weed under control and a fair amount of water in Puttenahalli Lake, the ecosystem was slowly recovering. This was after the first heavy rains mid-May. Several bird species that were prominent by their absence in the earlier months were back in the lake waters, among them, a pair of Indian Spot-billed ducks (Anas poecilorhyncha).
The Spot-billed Duck likes freshwater lakes and marshes. It feeds by dabbling in shallow waters and marshland, mainly on plant food like seeds, grasses and aquatic vegetation. It also looks for aquatic insects and their larvae, snails and other molluscs, worms and other small creatures. Our lake environment probably meets its requirements.
The ducks must have been waiting to lay their eggs! With an incubation period of about four weeks, the ducks did not lose any time. “PNLIT now grandparents!”, said PNLIT Trustee Usha as she spotted two little ducklings on 25th June. And despite being under the watchful eyes of the adults, one of the Coots was chasing them! 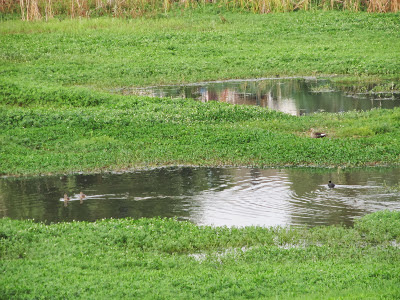 Spot-billed ducklings (left, in the water), Coot (right, in the water), parents (right, on the grass),
25-Jun-2013, Pic: Usha Rajagopalan
Join us this weekend to spot these birds while gardening. Deweeding and cleaning is on the agenda, 7 a.m. onwards. Bring your family along to make it a fun outing! 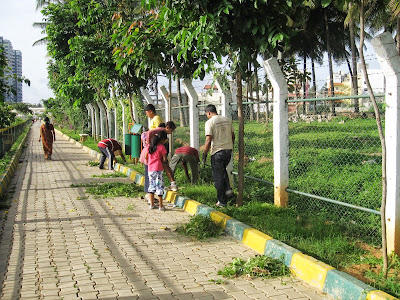 Volunteers last weekend, 30-Jun-2013 (Pic: OP Ramaswamy)
About Arathi Manay Yajaman 215 Articles
Arathi is a market researcher who loves to run and write. She has been actively involved in issues that affect citizens, including apartment management, waste management and lakes. She used to live in Mumbai and is now based in Bengaluru, working as a Community Anchor with Citizen Matters.
Website Facebook Instagram Twitter YouTube LinkedIn