Without much fanfare but certainly with a great deal of hope today afternoon we released the Salvinia weevil in two spots at the lake still infested with Salvinia Molesta. 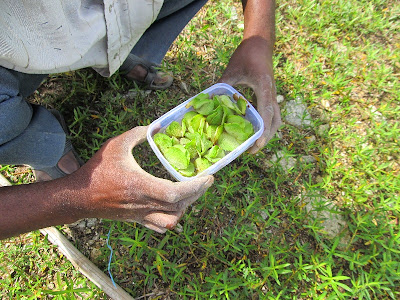 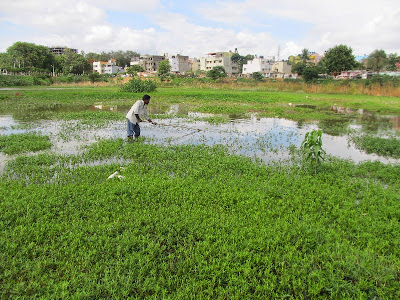 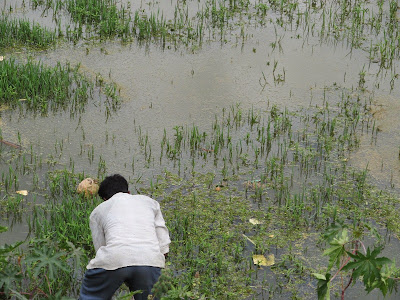 From the time Dr. Subramanya, UAS, Bangalore identified it last September, this invasive fern has been the bane of our lake. When the water level receded to mere puddles, the Salvinia began to dry in large tracts. We got it removed manually through BBMP’s workers. Very many resident volunteers living around the lake pitched in strongly on several weekends. When it seemed as if together we’d succeeded in getting the better of the Salvinia, a stray drizzle brought out fresh bunches of the killer fern.

BBMP Contractor Harish was kind enough to send his men to remove the weed again, again and yet again on 22nd May. Using a cloth, they scooped out the Salvinia which we trustees piled on the side of the walking track. By 5 p.m. they had removed every bit that was visible to the eye. That evening it poured and a week later, we spotted the thing again! That’s when we decided to change our strategy to a biological control through the weevil. More info on this weevil can be found here.

Briefly, the weevil lays its eggs on the Salvinia. The larva “feeds voraciously on new buds, warping and stunting the plant until it eventually sinks.” The weevil will not harm any other plant other than the Salvinia. For it to grow, thrive and eradicate the Salvinia, the water is not to be disturbed and no pesticide is to be used. We intend to do neither. 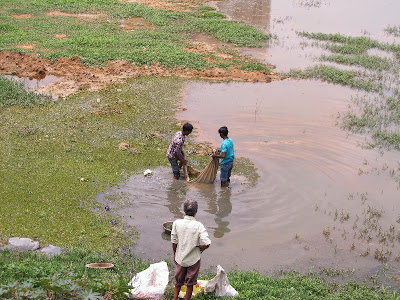 Scooping out the Salvinia 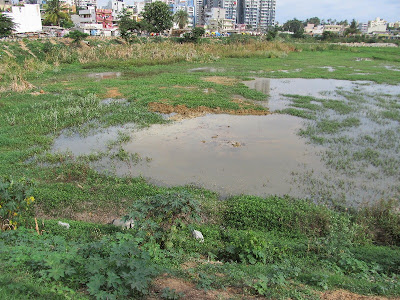 Thanks also to everyone who patiently scooped out the Salvinia. Your work is not done yet. Now that you know how the Salvinia looks, please scan the water closely for its recurrence. According to Drs.Ganga and Lyla, it will take time for the weevil to act on the Salvinia and clear the lake of the infestation. One factor that could expedite the process is that the Salvinia typically grows in polluted water rich in nutrients. Our lake is free of sewage (except for what the people living on the lake bund throw inside) and filling rapidly with clean rain water!