Despite the problems and challenges we have in maintaining our neighbourhood lake, each visit is such a delight and so full of surprises.

Today morning even while walking briskly (for a meeting at the Gazebo), a Fig tree growing wild at the edge of the lake caught my eye. There was a white breasted kingfisher sitting on its branch. I went as close to the grill as possible but that little fellow was not bothered in the least. He calmly sat there and let me shoot him (with my camera). 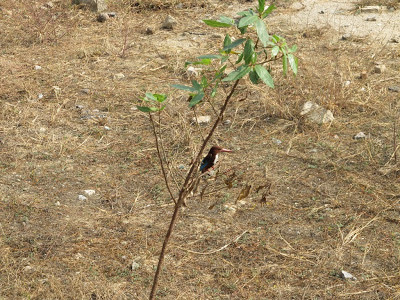 Our gardener Sivalingayya came hurriedly holding a white plastic bag carefully with both hands. What was in it but a big tortoise! It was apparently found walking along the track, sauntering in the 11 o’clock heat if you please. Before any one could spot and pounce on it for its tender meat, Sivalingayya brought it to us. I caught a quick glance of claws and a bit of its nose but the old man kept firmly within his shell. The gardener released it into a small pool of water. 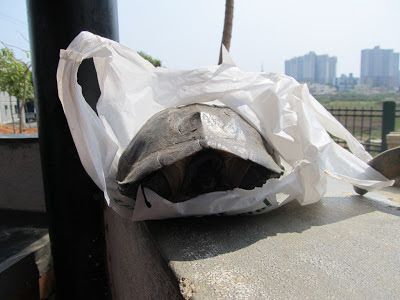 Just in case you would like to know, Tortoises live almost exclusively on land. They do not have flippers but normal feet without webbing and often with sharp claws for digging. They only enter water to drink or wash themselves off. They may be found in arid areas and unfortunately our lake qualifies for aridity in these hot days! It is quite likely that he will slowly inch his way and come up on the track once again (perhaps cursing us for setting him down on the lake bed!). After all, tortoises are not exactly known for their speed, are they?

As you know we have a pair or Purple Herons at our lake. We have spotted them at a distance, standing like statues amidst the bulrush, waiting for a fish or toad to show up. On my way back, I heard some bird sounds from the island. Mynahs flying to and from the island are common and so are the Purple Swamphens that seemed to relish the fruit of the Singapore Cherry growing wild on the island. The new sound was of neither bird. I stopped and took a good look around. Between the low branches of the Singapore Cherry was our neighbour, the Purple Heron! What was he doing there? Did he find the heat too much or did he decide to follow the Purple Swamp hen and come to take a bite of the Cherry? Are Purple Herons known to eat such fruit? Only an avian expert can tell. 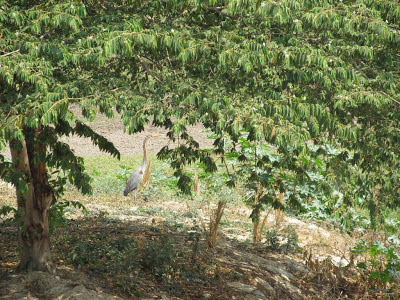 More excitement was in store just a few steps ahead. On the slope within the inner grill, on the burned grass was a discarded snake skin, all of ten feet or more! Snakes do this quite regularly. They tend to rub the old skin off against some surface when their new skin is grown. Is it possible to identify the species from the skin? As far as I know, well, it was just the old suit of one long snake which was now slithering somewhere at the lake with a gleaming new skin. Just to allay your fear, it was most probably that of a rat snake and that should not stop you from visiting the lake. 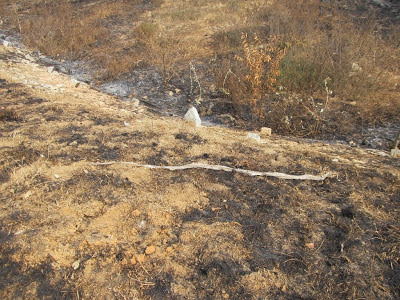 Perhaps you will see such exciting scenes yourself and write about them?