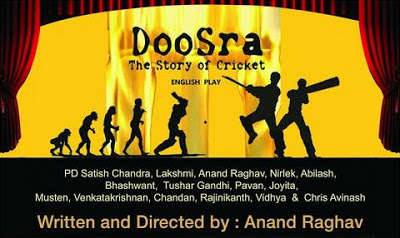 Doosra’s protagonist is the Game of Cricket itself. The changes in the game are depicted through the life of an ambitious and talented 20 year old Ganesh who gets to represent the country. Driven by power, politics, money and pressure, Ganesh’s metamorphosis illustrates the changing phase of the game which, over the years has grown from a much loved sport to a commercial venture.

The play offers the perspectives of a father who believes in the values of the game, an obsessed fan with a love and hate attitude, a victimized team captain, a bookie who represents the darker side of the game and a politician who patronizes the game for money.  The highlight of the play is video projections as back drop, a feature not often seen or experienced in Indian theatre. Noted cricketer Syed Kirmani appears in a scene. Anand Raghav, the writer director, calls Doosra ‘a play offering a theatre experience with a cinematic feel.’

“Doosra has a strong script and an unwavering focus on the theme. The subject is new and the dialogue well crafted, scoring sixes quite often with punch lines. Mention must be made of the several humorous moments. The exchange between Ganesh’s parents on cricket as a career is particularly endearing.” The Hindu.

“The play is worth watching for its appealing cast, humorous and witty dialogues. As the Video footage of Cricket is used in the play, one feels that one is watching cricket live.”  Deccan Herald.

The play will be staged by Paradigm Creation, in aid of Puttenahalli Neighbourhood Lake Improvement Trust (PNLIT) a not-for-profit, charitable trust. PNLIT has been maintaining Puttenahalli Lake in J.P. Nagar 7th Phase for over two years with the neighbourhood contributing their time, effort and money. The first citizens’ group in the city to officially maintain a lake, PNLIT meets expenses from donations made mostly by individual well-wishers.