During the early days of PNLIT, an anonymous comment was left in our online Guestbook:  “unless until lake is filled with water 365 days, i do not think we are achieved everything. yes, i appreciate all effort. however need to plan for connective filtered rain water reaching from surrounding area.”
Others would jokingly tell us that they’ll help in arranging water tankers to fill the lake.

Yes, two water issues have always been bothering us at Puttenahalli Lake:
– getting rain water into the lake, to raise the water level
– getting water outside the lake, for watering saplings, toilets, drinking.

The water that falls from the sky into the lake would take ages to fill the lake, so getting rain water into the lake means that rain water from the neighbourhood will need to be diverted into the lake. It is a simple task where water from catchment areas will have to be channeled and fed to inlets of the lake, but it will require significant digging and alignment of the channels to the lake. About a year ago, with the help of Enzen, a survey of the lake and the surroundings was done to check the feasibility and establish the quantum of work. The findings were positive and they were presented to BBMP. It has taken a while, but we are happy that the BBMP was convinced that this would be a worthwhile investment and agreed to undertake this work in the very near future. Fingers crossed! Once we have more water in the lake, some of it can be used to solve the issue of water availability outside the lake.

Survey done jointly by Enzen and PNLIT, with BBMP 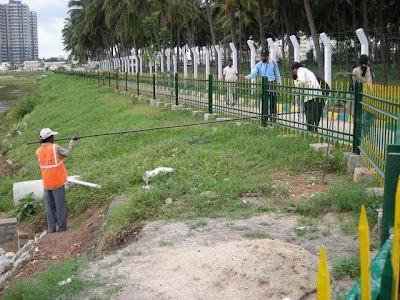 The shortage of water in recent times seems to have revived the ancient technology of Rain Water Harvesting (RWH) in urban India. Many children who are learning about RWH think it is an innovation of modern day eco-saviours and are surprised to know that civilizations such as the Indus Valley, Greek, Roman had incorporated RWH in their architecture thousands of years ago. Common sense would have told our ancestors that places located away from a sea coast or the banks of a river needed to depend on the rain to meet water requirements, and given that it would not rain through the year, the water that did fall from the sky needed to be saved. The founders of Bangaore knew this too, and that is why Bangalore was once the City of Lakes (rain-fed lakes).

Kanheri Caves, Borivali, Mumbai (1 BC to 10 AD) is a group of 109 caves that have been carved into a basaltic rock hill. Unlike what we expect monuments to be, the caves are not elaborately decorated and would have been a very functional Buddhist settlement. The most striking feature of the caves is the rain water collection mechanism and water storage cisterns, which would not only harvest rain water, but also keep the caves cool. Less ancient, the Agra Fort, in Agra (built in the 16th century AD) also has a very neatly laid out RWH system.

Water from the roofs flowing down 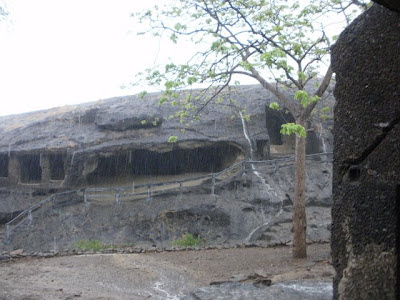 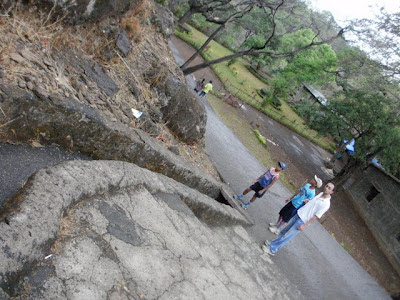 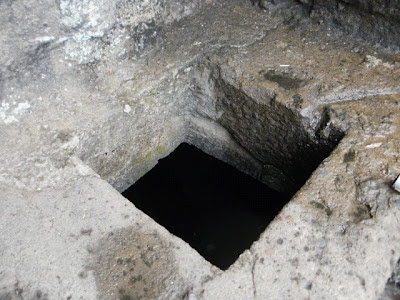 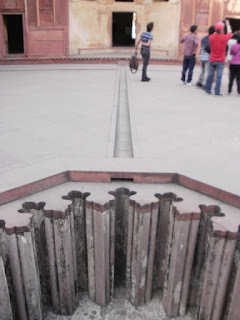 At Puttenahalli Lake too we have RWH, which will help meet the water needs outside the lake to a large extent.

Implemented about a month ago by Refurb-India (thanks to Mr Shankar Rao of Refurb-India, who also subsidised the cost for us), the RWH system at the lake is set up to harvest the rain water that falls on the roofs of the three small buildings at the lake – the Security Cabin, the Toilets and the Gazebo. With a collective catchment area of approximately 530 sq ft (49 sq m), at efficiency of 90% (i.e. giving allowance for spill off), a moderate rainfall of 10 mm, will catch about 440 litres of water*.

We have installed one 2000 litre storage tank between the Security Cabin and the Toilets, designed in a way that the space below the tank serves as a storage room for small tools. A second 2000 litre storage tank is fed by the Gazebo. This tank was already set up (in March 2011) on a platform built using 21 discarded tyres and mud. Overflow from this tank is directed into a ground into a Recharge Well. 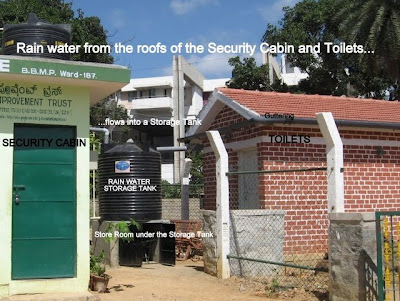 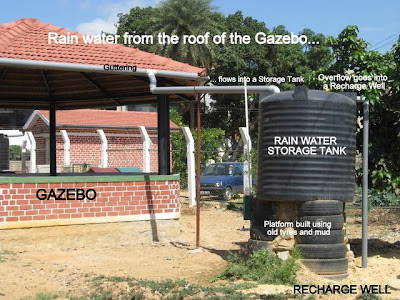 We hope that apart from its functional utility, the RWH system at the lake will serve as a live model for the neighbourhood, where people from the locality can actually see how simple it is to save and reuse rain water.

Now we just need the rains!