One evening I heard a buzzing sound near my glass door overlooking the garden. I did not pay much attention as I did not expect anything unusual. After a while I noticed two bees in my living room. One of them was lying on its back and was desperately trying to come back to its normal position. It took some time and started flying all around the house. I was scared of its sting—it took me a lot of courage to not swat it with a newspaper. After a long bee hunt, it was finally set free outside.

These bees had started to build its hive on a Kadamb tree. Now I was worried that in the pretext of removing the hive, people might burn the branches of the tree. Late in the afternoon when I wanted to take pictures of the bee hive, it was not there. Then I learnt that these bees were rock bees and they were migrating. They build a huge hive about a meter in diameter. The hive is usually built on inaccessible branches of trees, along the sides of steep rocks in the forest and even from the walls, rafters and other parts of buildings.

Bees form an important part of our food cycle. When bees begin foraging for pollen and/or nectar, they will visit the same species of flowers and work there as long as plenty of nectar or pollen can be found. For example, if a honeybee starts collecting in an Acacia tree, she will fly from Acacia flower to Acacia flower, and not behave as many other insects do, visiting different species of plants within the same trip without any great pollination effect. This behaviour of bees is called foraging constancy.

Bee communities, both wild and managed, have been declining over the last half century, as pesticide use in agricultural and urban areas has increased. There have been a number of reports in the media about the mysterious disappearance of large numbers of honey bees; this is called colony collapse disorder. This is of great concern as the biodiversity of ecosystems, as well as the future of our agriculture is at stake. In fact without bees, more than 80% of the variety of the food we eat could disappear.

In China and Nepal, women hand-pollinate apple blossoms, because bees in this region have gone extinct, probably by the excessive use of pesticides. It takes 25 people to pollinate 100 trees, a job done much more effectively by two beehives. Their role in the food chain is so important that in 2007 the National Audit Office collated research working out the value of honeybees to the UK economy. The value of the bees’ services was estimated at 200 million pounds a year. The retail value of what they pollinate was valued closer to 1 billion pounds.

Time magazine published an article bringing out the significance of bees. “If we don’t do something, there may not be enough honeybees to meet the pollination demands for valuable crops. But more than that, in a world where up to 100,000 species go extinct each year, the vanishing honeybee could be the herald of a permanently diminished planet.” 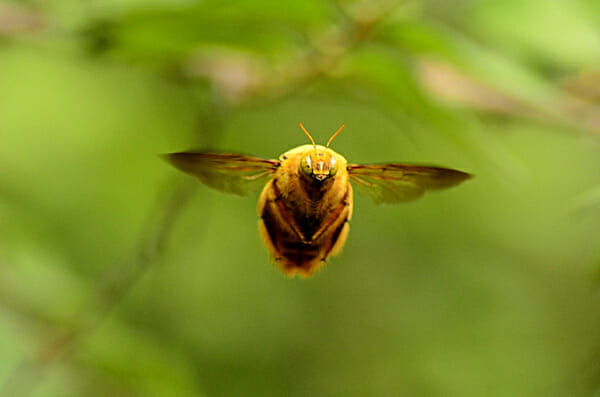 It is critical to consider practices that will benefit pollinators by providing habitats free of pesticides, full of nectar and pollen resources, and with ample potential nesting resources.

About Poornima Kannan 0 Articles
Poornima is an avid blogger with keen interest in urban wildlife.She is also a freelance communication consultant with special interest in organisations that work towards a social cause.