Dear reader, who I may know well or not at all, you are going to get to know all sorts of strange things about me. Let’s be forward with each other, shall we? Today, for instance, I am going to write about my toilet.

Of all of the things I’ve been itching to share with you, I think I need to talk about my toilet. And while I’m at it, I might throw in some interesting details about the rest of the bathroom as well. You see, this isn’t really the type of restroom I’m used to. 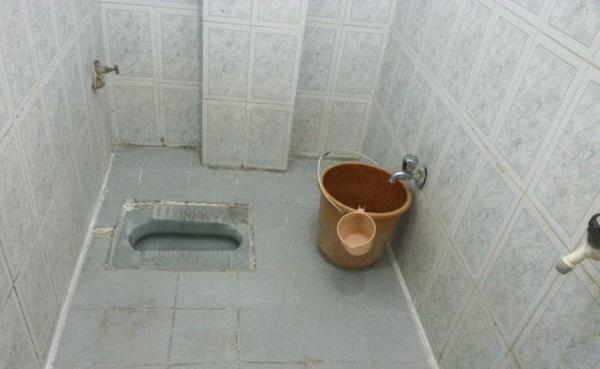 Had you show me that picture a week ago, it would’ve been a sort of “Where’s Waldo?” activity, where I get to try and spot the toilet, because really, it’s fairly nondescript. A nice little hole in the ground, not even pretending to offer a place to sit.

When I first arrived, and was introduced to my living quarters, it did come as a bit of a shock when what I assumed was a closet door revealed my own private bathroom. Yes, I take pride in my private bathroom – after all, that’s not the kind of luxury many college students anywhere in the world are afforded.

At first glance, all was well. A sink – fabulous, I mastered those years ago. A shower head jutted triumphantly out of the wall. But rounding the corner, there was only a little hole and a bucket to greet me. The hole’s purpose dawned on me quickly enough, but it was the bucket, sitting ominously in the corner that worried me the most. It was to my embarrassment that I had to ask what it was doing there.

Ah, so the thing I had been eyeing so suspiciously was my new shower. And the shower head I had spotted earlier? Mere decoration, as it no longer worked.

This was a game changer.

Until you’ve found yourself alone, laughing madly at your own inability to bathe with a bucket, you haven’t lived. Until you have dumped a bucket of cold water on yourself because you were too shy to ask about the hot water, I assert again, you simply have not lived!

The toilet, too, has provided its share of interesting predicaments. Perhaps it’s also true that until you have had to Google how to use your toilet, you have not lived. But I’m not so sure about that one.

I’m happy to report that in the few weeks I’ve been here, the bathroom and I have established a working relationship. The hot water and I have been introduced, the bucket and I are now well-acquainted, and I no longer need a search engine to use the bathroom.

Toilets elli?
Cow’s urine on one’s face and other such injustices
You got to go, when you got to go!