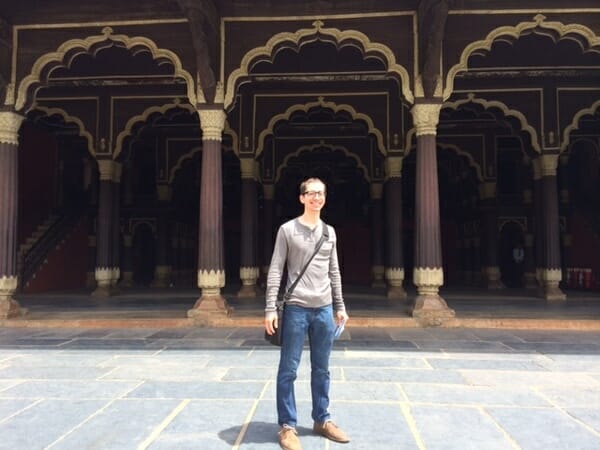 My memory of arriving in Bengaluru is as fresh in my mind as the sweat on my brow was as I exited my plane at the Bangalore Airport about 1 am on July 1st. The weather was warm and humid as I expected, but I was taken aback by its intensity; the atmosphere was oppressive.

I’m used to the cooler climate of Seattle. In my hometown of Yakima, a medium-sized town in Eastern Washington, where I spend my summer vacations, the temperature could climb upwards of 100 degrees Fahrenheit, but it was dry instead of humid. As I know now, the climate was only one small difference I would have to accept.

The sun was beginning to ascend above the horizon when I hired a taxi to transport me to the Paying Guest facility I would be staying at during my trip. Red and orange hues were splattered against the lower region of the sky, the light not yet reaching higher. It was a new dawn for a new visitor. The tranquility and beauty of the scene was soon lost as I rode in traffic, and experienced the anarchy of the road.

The incessant honking of horns! Taxi drivers in large U.S. cities are reputed to be aggressive, but every vehicle on the Indian roadway was recklessly fighting for each inch of space on the road. In America, horns are only used in emergency, drivers have to obey a set speed limit or face a ticket, and cars stay in their lanes. I’m amazed I haven’t seen an accident yet. 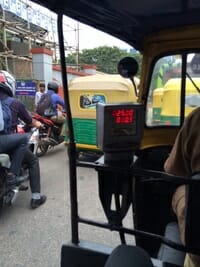 Later during my stay, I asked a local friend about a sign I saw that read “Follow Lane Discipline” and he laughed. He said I could use it as a joke. I’ve seen other signs, such as “Control Speed”, and “Fast Drive could be Last Drive.” I do not think most drivers heed the warnings.

I passed countless rows of palm trees, piles of red dirt, large plastic billboards, and half-constructed buildings of cement and poles. So far, Bangalore seemed like a city in the midst of development. Eventually I reached the main city. I was introduced to the disorienting layout of roads. I could not say whether naming roads after their width, such as 100 Ft Road, or 80 Ft Road, was an odd practice or one of common sense. Trying to find a certain establishment at an address proved impossible. My driver could not find it, even after asking for directions. After several phone calls to some colleagues, they were able to make arrangements for me to stay at a different PG that we were able to locate.

I experienced traffic congestion, felt the smothering air pollution, noticed the poor infrastructure with incomplete or broken sidewalks, smelled the rank odor of sewage, saw garbage strewn on the sidewalk, sometimes in large piles, spilling into the road and gutters. Cows were strolling casually along the road among the cars causing traffic delays, and feral dogs were roaming the street, some laying on the sidewalks as if dead, flies buzzing persistently around their body. This was as foreign to me as another planet.

Bangalore, a city known as the Silicon Valley of India, the erstwhile Pensioner’s Paradise, and officially called Bengaluru since 2006. A city with a multi-faceted identity.

Maybe all new arrivals see the worst of the city. When faced with a foreign experience, most of us have the tendency to compare it to familiar experiences as a frame of reference. But those are only surface level impressions, and a poor way to judge a city.

I think about Seattle. It has a reputation of an environmentally conscious population, eating their organic diets and driving their hybrid cars. But it’s unfair to pigeonhole it into such a narrow description. The reputation of a city is important, as a brand, but it generally does not convey a complete picture of its identity and culture.

A colleague of mine let me borrow a book with a collection of essays. One essay was by U R Ananthamurthy about the name change of Bengaluru from Bangalore. The author said all he wanted was for the name change to inspire someone to learn at least one word of Kannada. Language is an essential aspect of a culture. I don’t think the two can be separated. I’ll order a balehannu the next time I want a banana.

I’ve found the culture of Bangalore to be one of the most diverse cultures I know. I’m incredibly lucky to be given a chance to live here and experience it first-hand for two short months. I was recently on a food walk in Fraser Town. The tour guide asked everyone in the group to introduce themselves by sharing their name, country of origin, and two words to describe Bangalore. I chose the words “traffic,” because I cannot escape its noisy presence, and “spicy,” since we were on a food walk, and everything in the diet here has spice. Several members of the group were natives, and they invariably answered with one word: home.

I hope to find a similar degree of comfort and familiarity.

Author’s Note: I’ll be taking over the blog from Ms. Claire Graham, adding blog posts throughout the next eight weeks.

Cow’s urine on one’s face and other such injustices