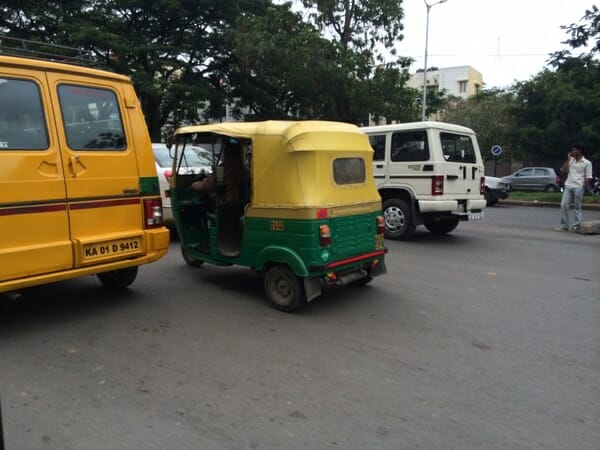 Some autos charge extra for each ride, while there are a few of them who go by the meter. Pic: Christopher Martin Lopaze

Their rounded, carapace-like forms, yellow hoods, and green or black bodies are familiar to anyone living in Bengaluru, as the road is usually congested with them. Yes, we are talking about autos in Bengaluru.

Would it surprise you to learn there are more than 1,30,000 legally registered autorickshaws in Bangalore? Those figures, of course, do not account for the autorickshaws that operate illegally without a license.

Most put the “rick” into “rickety.” They also happen to be my preferred method of transit in the city. And, because I’m a gullible foreigner, I found out about a dubious business strategy by a few opportunist autorickshaw drivers and shops.

Why I use autorickshaws

I was unfamiliar with autorickshaws since I hail from the United States of America, where they do not have any of these, but I’ve quickly grown used to the sight of them.

I’ve found travelling by autorickshaw to be the most convenient and expedient way to roam around Bangalore. Taxis are more comfortable, sheltered as they are from the sweltering heat and the noise pollution, but they are more expensive. Buses can be cheaper, but they are slower, and they go places in a more roundabout way. So travel by rickshaw it has been, when walking won’t serve.

Comfortable they are not. It is cramped in the backseat, and the many potholes and bumps of the uneven road can lead to a jarring ride.

Usually, the drivers and I only share enough English in common for me to negotiate a payment, fare or fixed price, and give them directions to my destination.

When I first used rickshaws, I did not know about the law requiring drivers to use the meter to determine the fare. But there’s the law, and then there’s reality. Only some drivers observe the law.

In my experience, most drivers want to negotiate a fixed price for a ride. As I have developed a better sense of how far away certain places are, and how much it should cost if the meter was used, I can tell how much they are over-charging. It’s usually not too exorbitant, and I don’t argue too often.

Some drivers have tried to charge the fare plus 20 rupees. I’ve been in an autorickshaw with a local before, and the driver attempted to do so, so it’s not the exclusive domain of foreigners. A minority, however, agree to only charge by the meter. Bless their hearts.

Am I setting a bad precedent? I hardly feel cheated when drivers charge me an extra 33 cents. The financial loss to me hurts less than the financial gain that benefits him.

Also, I’ve only seen male drivers. Are there any female drivers? Now that I think about it, I’ve only had male taxi drivers as well in the states. Maybe it’s an all-male profession, for good reason. Being a driver could be dangerous. 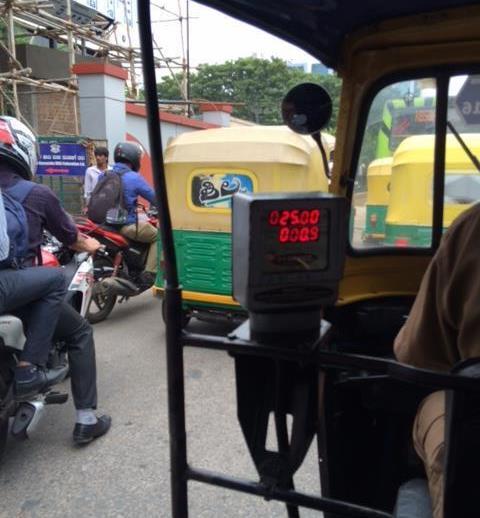 A view from an autorickshaw. Pic: Christopher Martin Lopaze

I’ve been privy to one irksome habit of some autorickshaw drivers near MG Road. They say they will charge you a low price to take you to where you want to go, about 20 rupees, but first you have to agree to visit two shops. They make it clear you aren’t obligated to buy anything, just look.

I refused the first two times. But the third time, I gave in. I needed souvenirs anyway, and I was curious by now. It felt a little shady, but I did not think I was putting myself in danger. I was taken to two nice shops with a wide range of goods. I even bought some souvenirs.

When I was asked again for the fourth time, I agreed. Would I be taken to the same shops, the New Heritage Collection or the United Cottage Industries? As I suspected, I was. When I told the driver, he took me to two different stores. How many stores participate in this scheme?

One of the drivers claimed he owned the shop. Another driver claimed it was his uncle’s store. Let them tell it, and they are doing me a favour.

I directly asked one of the drivers about their incentive for bringing customers to certain shops. He said that he was reimbursed with fuel coupons. This particular driver told me he would get a coupon worth 500 rupees for each store he brought a customer to. In his own words, he said fuel is expensive, so it was a wise financial move.

Do they only target foreigners, or do they also attempt this on locals?

A driver who said ‘pay me whatever you want!’

Mohamed only drove me a short distance, but he did not waste any time in sharing information about himself.

He sounded sincere. I believed him.

Mohammed told me he had been driving an autorickshaw for 48 years. The picture on the license was of a much younger man, presumably Mohammed, although it was hard to tell. It lent credibility to his story. He had an infectiously friendly attitude. He almost always smiled when he spoke, and he spoke often. Mostly about his six kids, or asking me questions, such as where I was from.

He told me he was poor in a matter of fact tone without any negative connotation associated with the word, and would be driving an auto-rickshaw for as long as he could foresee. He had to get his kids through school, after all. That was the way it was, and he had accepted it.

It occurred to me that perhaps this was an act he tried on naïve tourists, but I dismissed the thought. If it was, he was skilled at deception. He did not appear to be trying to make me feel sorry for him to cajole extra cash. He seemed more content than most people I’ve met.

I liked him, and I paid him for his kindness. Maybe I could learn a lesson from Mohammed, the autorickshaw driver I’ll never meet again.

Harassed by auto drivers? Now you can do something.
What to do if you are dissatisfied with an auto
How to ensure a safe auto journey in Bangalore
Booking an auto in Bengaluru has just been made easy!