Today, I’m writing about the vitally important topic of whether Indian cinemas should have intermissions just for the sake of tradition. (Spoiler alert: I don’t think they should.)

I watched my first movie, How to Train Your Dragon 2, in Bengaluru at Forum Mall about two months ago. As an American, everything has been new in India, but this cinematic experience felt familiar as I sat in a comfortable chair absorbed by the on-screen action. Then the lights turned on abruptly. The screen image flickered and froze before turning green. I thought the projector had broken. But it was only an intermission, for a movie with a runtime less than two hours.

This practice of enacting mandatory intermissions annoys me. One reason I like watching films is the immersion effect; the concerns of my everyday life fade away as the lights dim. Arbitrary intermissions spoil the magic of cinema, and I cannot stand for it. Seriously, I sit sullenly with my arms crossed and fume. 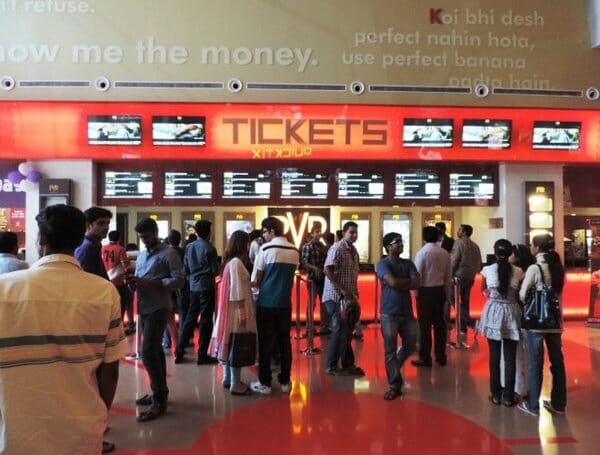 During intermissions, theatres have the opportunity to make money by selling refreshment. Pic: http://phoenixmarketcitybangalore.com

What’s the need for intermissions?

Intermissions used to be common in American cinemas during the early 20th century because of long runtimes, but out of the crop of recent movies, only a select few have had an intermission.

Indian cinemas have retained this practice. Intermissions became a tradition in India for mainly two reasons: some Bollywood films, as with American films, had lengthy runtimes, but Bollywood filmmakers also used the intermission as a tool to separate the two contrasting moods of their film. They wanted the audience to be prepared for a radical tonal shift between the two halves of the film; they also wanted to give the audience a break from the “intense” emotional content. Those are all valid reasons.

Now more and more Bollywood films have shorter runtimes, eliminating one of the reasons for intermissions. And some directors don’t — INTERMISSION! BUY REFRESHMENTS FROM OUR SNACK STAND! WATCH ADVERTISEMENTS FOR THESE PRODUCTS! END INTERMISSION!— find it necessary any longer.

Are there any benefits for the audience? It is an optimal time to use the restroom without missing any part of the movie. 3D glasses are uncomfortable to wear, so it is nice to be able to remove them temporarily.

Let’s not forget about snacks. Popcorn, soda, and a film. The holy triumvirate. If a customer buys food at the beginning, it is most likely gone by the time you’ve reached the middle of the film. For many people, it’s probably a welcome break so they can restock. In the two movies I have seen, about half of the audience left their seats during the break. Are they doing it out of necessity or habit?

Who needs the intermission the most?

The bottom line is that it helps the theatre’s bottom line. They collect more revenue from refreshments and the extra advertisements. I’m not saying they are greedy. Theatres don’t have a large profit margin, and need the revenue. Some people might argue that an intermission reduces profits because they show fewer movies, but the venue is making money during the interval.

I have no problem with a planned intermission by the filmmakers. No matter where the intermission is placed (and who decides that exactly?), it interrupts the flow of the narrative if not an intentional choice.

The first movie I saw had the intermission at an especially clumsy moment. The plot had been fast-paced until then, and it stopped the narrative momentum. The second movie I watched, Transformers: Age of Extinction, paused at a more natural moment, as a major plot development had just taken place, but it was still frustrating.

Unintentional intermissions distract from the experience if they are not part of the filmmaker’s vision. They should suffer the same fate as Luca Brasi in The Godfather (which did not have an intermission). When I watch my next film, whenever that will be, I’m sure I will hate the intermission just as much as I did the last two times.

New auto offer at the heart of Bengaluru: Visit two shops and get a low-cost ride!