Recently I went on a food walk with Bengaluru’s Unhurried walk and tour company. The three-hour walk led me through the charming streets of Basavanagudi and into some fabulous eateries. At the handful of small restaurants, shops and bakeries, I tried everything from piping hot kaapi (coffee) to heavenly neer dosa with sweet coconut chutney to idli in a savoury sambar. Plus some pomegranate ice cream, banana chips and a “Japanese cake” along the way (the latter of which is neither Japanese nor really a cake, but is delicious.) It was a deeply satisfying and very educational evening. 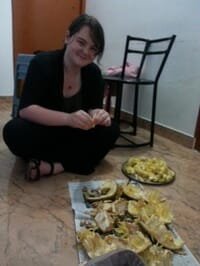 Food has been a huge component of my time here in India. The root cause of many good memories, much joy and five weeks of minor gastrointestinal misery. Once adjusted to the coconut oil and spice, however, it is easy to fall deeply in love with the food culture here. And it’s just that: a culture. I have had to unlearn many eating habits and replace them with new skills.

For instance, all of that time spent learning how to properly hold a fork and knife was rendered null as I dipped my hand into rice and sambar for the first time. It was a slower process than I expected, and as I struggled through my first few meals I was offered spoons by sympathetic company, but I was determined. After weeks of self-consciously eyeing the techniques used by those around me to so adeptly feed themselves, I’m proud to say I can eat almost all of the rice on my plate before admitting defeat.

And being able to eat properly wasn’t just important for the obvious reasons, but because I am confronted with food constantly.

I’ve often told my friend here that in India, if I stand still for too long, someone will try to feed me. Once, waiting on the street for said friend to return from a shop, the cook from our PG walked past with some mysterious puffed rice dish, heaped a spoonful into one of my hands and carried on without a word. The same is true of meeting people, or visiting their homes. Countless cups of coffee and chai (tea) and small dishes of snacks I don’t know the names of, are gently thrust into my hands.

This is the general trend: I will not know the name, much less the ingredients of the food I’m eating. Asking usually doesn’t get me very far — they may not know the English name, and if they do, it doesn’t mean I’ll know what it is. So, blessed with no food allergies and a generally cooperative stomach, I have yet to turn down a taste of something new. Much of my time here has been spent munching happily on something I can neither identify or pronounce. 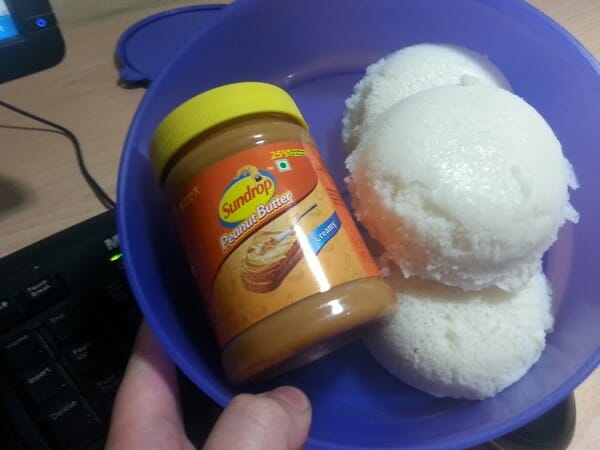 Of course, even familiar names like “coffee,” “sandwich” or “noodles” are reinterpreted here to mean something similar but certainly different (and usually spicier) from what I know back home. This doesn’t mean I don’t at least try to make things taste a little more like home. Idli with a hearty spoonful of peanut butter on top has proven to be a fairweather friend when my stomach cringes at the thought of more sambar. Curd with honey mixed in may have earned me strange looks from my PG mates, but I insist, it’s really quite good. And after weeks of spicy and unfamiliar foods, a chapati rolled with apple or banana (and yes, maybe a bit more peanut butter for good measure), tastes not so unlike the tortillas and apples I’m used to at home.

I’ve written before about having to relearn even the most fundamental skills while in Bengaluru. And while funny (more so in retrospect) and ultimately harmless experiences, they have been huge lessons in humility. Lessons soaked in jaggery, sprinkled in masala, and that smell of cardamom and ginger. Reminders to remain humble in the form of dishes that will be sorely missed when I return home this fall.