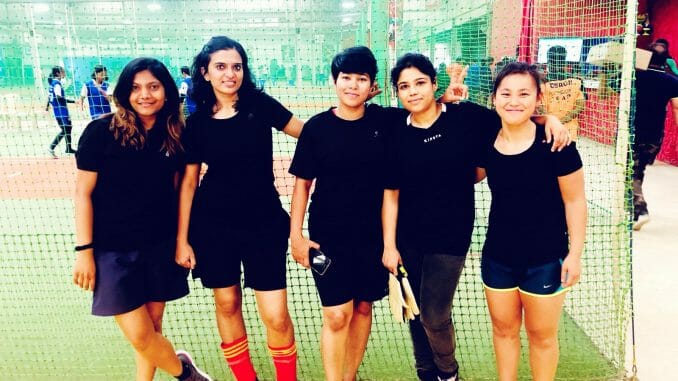 Dirt covered cricket fields sprinkle Bengaluru. The sign of any football field—goal posts or otherwise are nary in sight. The lack of grass fields means footballers can get their fix by booking turf fields that have been planted in the midst of the busy city.

Netting surrounds all sides of the field as cars, scooters, and autos zoom past the outdoor arena. The lights only went out twice during our field time and by the end of the two hours, I felt like I had found a bit of home amongst the craziness of India.

Since coming to the city I’ve been invited to play a round of golf, invited to meals and I even managed to find some football in a cricket-crazed country. My fear of loneliness and not meeting anyone has since abated.

I got a text one week asking if I wanted to play in a football tournament that one of the guy’s friends who I played with was organizing a team for. There was no way I was going to pass up this opportunity even though I had no idea who I’d be playing, where I’d be playing or how I’d get there.

After waking up to my alarm at 6 am to get to the field, I get a text from one of the players who said she’d give me a ride.

The next thing I know a woman in shorts and a scarf covering her face under her helmet is extending one out to me. There was no question of whether or not I’d get on the scooter. Instead, she asked me to navigate us to the fields using Google maps—which for me caused almost as much panic as the scooter ride itself. My friends at home know better than to trust me to navigate anywhere, even with the aid of technology.

Eventually, we made it there in one piece, we got off and she looked at me and asked how long I’d been in Bengaluru. I told her one week and she asked if I’d been on a scooter before. No, I had not. She told her teammates this and they all burst out laughing.

Growing up playing club soccer, I’ve been to my fair share of tournaments but this one was unlike any other. My teammates for the day I learned were all older, in their thirties while most of the other teams there looked to be 13 or 14 years old. There was only one other team of older players.

I kept looking around in the arena for a football pitch but found none, we would be playing on their indoor cricket courts the size of a batting cage. Then they explained the rules of the game that day which I thought was going to be a normal game of football but instead was a distorted version of the beautiful game.

I quickly learned that the referees were going to be as stringent as they could. Every other second a whistle was blown, if the games were any longer I would’ve exploded.

My team kept giving me sympathetic pats on the back, they seemed to understand my utter confusion at what I thought was supposed to be a football game. We ended up losing our first two games and winning our third but that wasn’t enough to make it to the semis. But we still celebrated.

The girls eagerly invited me to grab a beer with them and some food. It was comforting to be among a group of friends even if they weren’t my own. The familiar teasing and updates on each other’s lives were fun to listen in on. They, in turn, inquired about me and teased me for being so quiet. I was not living up to their image of a loud American.

One thing that struck me that we discussed a bit over beer was one of the girl’s experiences about having to lie to her father about playing soccer. I couldn’t help but think of one of my favorite movies, Bend it Like Beckham. If she told him the truth she knew he wouldn’t let her keep playing. They all seemed to share expressed how nice it would have been to be able to have grown up playing football and that it was exciting that all these young girls were starting early.

This conversation really made me think. As someone who has coached football in the past, I watched the other games that day and noticed the quality was significantly lower than what you might expect to see in the U.S. by kids the same age. Growing up, there wasn’t a question of “Can I play sports?” It was, “Which sports?”

As the Women’s World Cup just finished—in a spectacular fashion I might add—I have been thinking about all the girls who got to see themselves in the strong women on their TV’s this month and the dreams that have grown as a result. But now I also think of all the little girls whose dreams will remain just that, dreams. Whatever mixture of barriers they face—cultural, structural, political—while disheartening to know that the beautiful game isn’t equally accessible for everyone, it’s even more inspiring to recognize the courage and passion of those who keep on lacing up their boots.

There’s a reason why it’s called the beautiful game because it is. And the beauty even thousands of miles away from home in a country where it is relegated toward the bottom of important sports, I’ve found people who see it, play it and dream about it.

About Grace Madigan 4 Articles
Grace Madigan was an intern from Seattle, Washington. You can follow her @grace_madigan19.
Twitter