From the moment I stepped off the plane, it became impossible to forget that I was in Bengaluru; the city demanded my attention.

The humidity that alighted on my skin and curled my hair, the sound of new languages being spoken around me – it all seemed to say, “Hey! Pay attention! You’re not at home anymore!”

As if I could forget.

No sense is left untouched. At all times of day, the sounds, sights, and smells of the city surround me.

I fall asleep and wake up to a barrage of horns, the howling of dogs, the sound of children playing on the street outside my window. These sounds, they should be familiar – I’ve lived in a city. But something about their constant-ness, about my inability to shut them out with windows and doors, makes them different.

In the morning, when I open these windows and doors, I am greeted with the smell of spices I can’t name, the scent of food I can’t pronounce, of a thousand other things, both terrible and enticing, that I can’t describe or pin down.

And after a cup of tea – cups of tea, which I’ve found, are mostly universal in their loveliness – I step outside. These new scents, these new sounds, are combined with a world I couldn’t have imagined one week ago at my home in Wenatchee, Washington.

This morning, I was offered a coconut by a man with a bicycle full of coconuts. Last night, I walked past a cow napping on my street corner as I went to fetch dinner. On the precarious scooter ride over, I saw a woman doing laundry by the side of the highway. 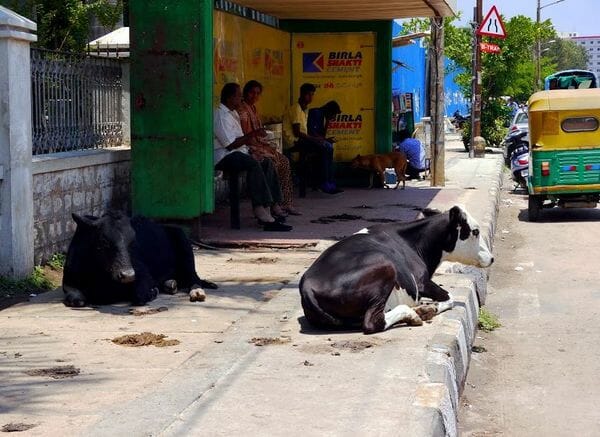 Cows on the pavement near a bus stop. Pic: Rahul Ravi

I don’t know how else to put this, but back home there aren’t people with bicycles full of coconuts.

Other cities are so passive, indifferent to my praise or my criticism. Indifferent to my being there at all. But Bengaluru demands attention, demands my focus and curiosity and my openness, at every moment of every day.

I think that’s because everything is so different. The food wonderful, and often too spicy for my American palate. The streets dangerous, and filled with so much I find fascinating. Even the bathrooms—although their purpose is so universal—are daunting in their unfamiliarity.

Admittedly, I was frightened as the cab from the airport took me weaving through the city. There were intervals where we crawled along a strong smell of sewage, and I watched scrawny dogs up to their bellies in trash, eating happily alongside the crows and livestock. As we drove past these things, I silently willed my cab driver to drive on—to please, please, please not drop me off there. But another intersection was blown through, more lanes ignored, and already we were in another part of the city, where the cows and dogs remained, but the river of garbage had dissipated to a mere trickle.

Jet-lagged and travel weary, I just closed my eyes and tried not to think about the turn across three lanes of traffic the driver had just made.

After sleep and a little of what passes for “peace and quiet” in Bengaluru, however, I emerged more optimistic. In fact, I emerged elated.

Yes, traffic is horrid and the streets constantly writhe with near misses. A car and a scooter nearly colliding, swerving, honking, and speeding onward, to continue this deadly-looking waltz farther down the road. On my own scooter ride, grinning and white-knuckled from clinging to what handle bars I could find, how could I do anything but laugh at the madness and efficiency around me? In between a truck hauling water, a car and two other scooters, the only thing I really have time to contemplate, is how incredible it is that I’m here at all.

What a privilege is it to be in a city that demands I pay attention, that demands I listen and see and smell? A city that is holding me accountable for everything I do and feel and think. Is it uncomfortable? Sure, how could it not be? But it’s certainly incredible as well.

New dawn in the land of chaotic traffic and spicy food
Stranger in a strange land: The expat experience in Bengaluru