Today marks my 12th day in Bengaluru and I am proud to say my desire to take pictures of every single passing cow has subsided.

Since arriving the weekend before last, I filled my phone’s camera roll with photos of cattle, likely confusing many passersby who have shared the roads with these guys their whole lives. I laughed out loud on several occasions, like when a large group of them walked right past my gate one evening, or when I moved out of the way of one only to have it move the same way putting me right back in the center of its route. But now I understand, Bengaluru belongs to the cows just as much as it belongs to Bengalureans. Vegetarians rejoice.

Now that I have seen rats, goats, chickens, a horse, and more stray dogs than I can count—mammals as roadside attractions is the new normal. It’s great. But don’t get me wrong, Bengaluru is much more than its animal population. It’s a city packed to the brim with people whose hospitality and willingness to share cups of chai and meals with me on a daily basis continues to surprise me. It’s so full of beauty that it’s difficult for me to walk 10 feet without stopping to take a picture. In fact, I have probably risked being run over by an auto or motor bike more than 100 times because of my stops to capture the street-side coconut vendor, or the guy selling cotton candy to drivers, or the baby goat sleeping underneath a car.

Those pictures, although a bit risky, are important. Sooner than I would like, they will become distant memories of my time spent in this so-chaotic-it’s-poetic city. 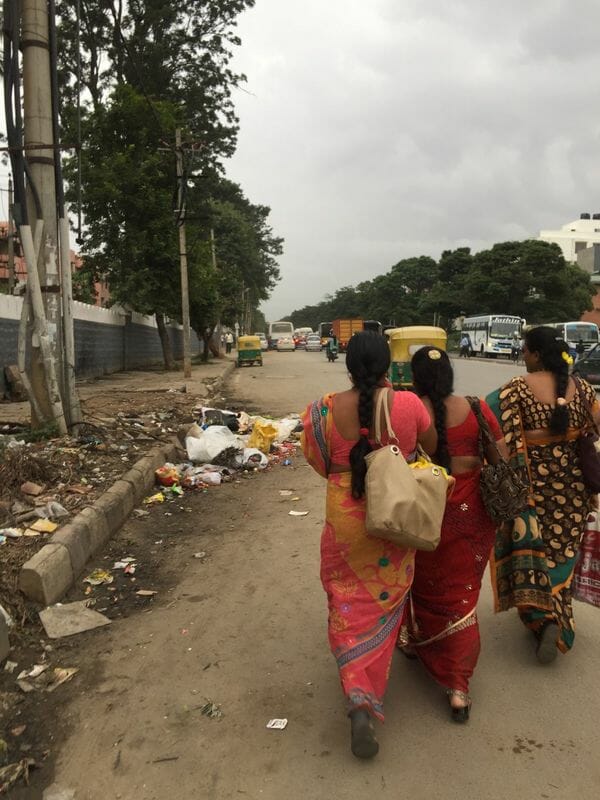 A few days ago I took a photo during my walk home from work on Jakkasandra road. It captured three women dressed stunningly in their brightly-colored sarees standing next to a large pile of trash. Not quite a black spot, but an abandoned, large pile of trash nonetheless. Both things, sarees and trash piles, are commonplace here—arguably as commonplace as cows. For me, this juxtaposition illustrated perfectly something I had been feeling since my arrival but didn’t exactly know how to articulate. That Bengaluru, maybe India in general, has mastered the art of being so beautiful, yet so ugly all at once.

To see so much beauty in what are normally the more monotonous parts of my everyday life is not only a blessing, but it’s a lot of fun. Here, every building is painted a bright yellow or blue or red or pink. Clothes hang on lines outside of every residence on my block, flowing in the wind, just screaming to be photographed. People prepare for the monsoon with rainbow umbrellas as if gunning for a spot on a Bengaluru postcard. Kids play in the quiet side-streets, running barefoot while a stray dog relaxes on its cement throne. The food more often resembles a water-color painting than not, very dissimilar to the food I have grown accustomed to. And the fruit-wagons that occupy my entire route home look like they came straight out of someone’s imagination of what they think India would look like. 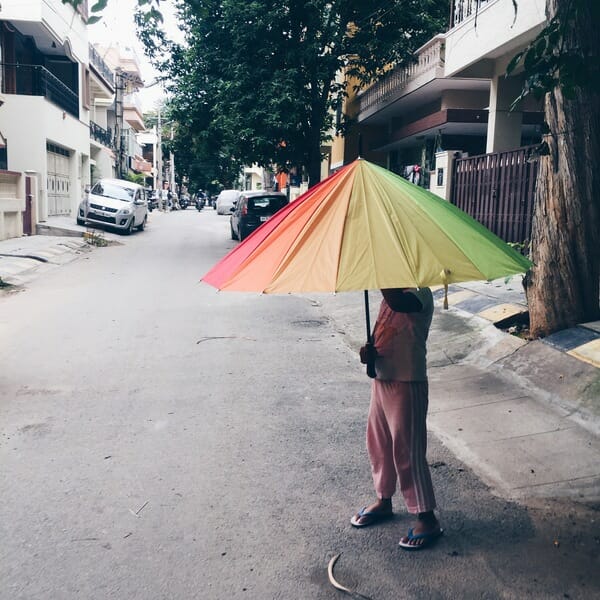 Those people don’t usually imagine the ugly side of India. The part that kind of makes you want to rip out everyone’s car horns because anytime you approach traffic the ear-piercing sound makes you want to crawl into bed with noise-cancelling headphones and never leave. Or when you have to cover your face with your scarf as you walk past a black spot that for some reason, always seems to have one lost shoe mixed into it. Or when you, while peering out the window of an Uber, pass by dozens, probably hundreds, of families living under tarps/makeshift tents, awakening you from the comfort of your own privilege.

Those parts, as uncomfortable as they may make a foreigner with so little local knowledge and context, are just as much a part of Bengaluru—of India’s identity—as are the sarees, pinches of ginger in cups of tea, sliced mango in the afternoon, or the taste of dosa in the morning. Bengaluru is exposed. Like my classmate and former Citizen Matters intern Holly Thorpe wrote last summer, it is “a city that refuses to be ignored.” Indeed it is. A few walks around Koramangala and you can see up-close and first-hand many of the problems that plague this city as it navigates its way through an intense period of population growth. Everything in Bengaluru, it seems, is out in the open. 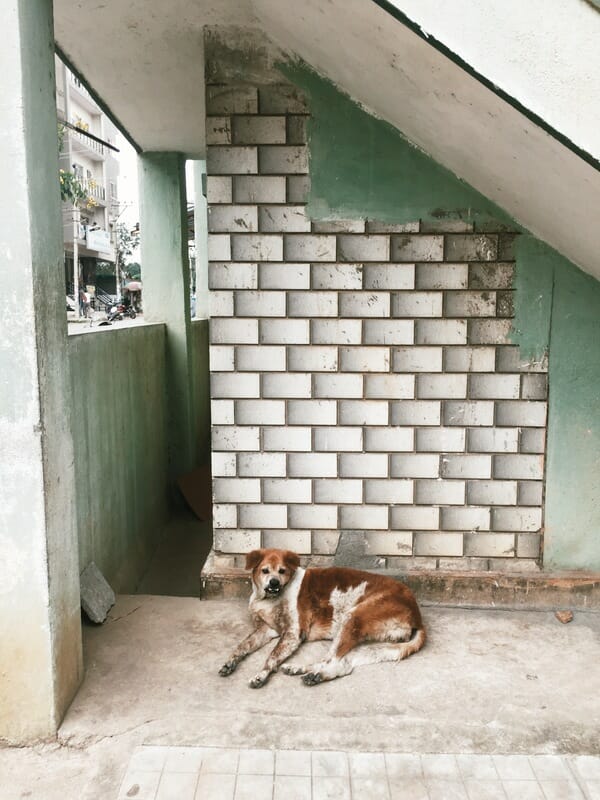 My first week here consisted of several semi-long walks to McDonalds or Dunkin Donuts, where I was rescued by somewhat “American” style coffee (I have now learned to love instant coffee, but that’s another story.) Anyway, on all of those mornings, I was captured by yet another juxtaposition of “modernity” (which I put in quotes because it is an incredibly subjective term), or capitalism, depending on how you look at it, and poverty. I would see young men or women racing off to work at HP, or Amazon, or Flipkart, or some start-up, pass by a family with no roof, no electricity, no plumbing. A homeless family living in a hut in Koramangala, which has been dubbed by some “India’s hottest startup neighborhood.”

Those moments of complete and total polarity—in every sense of the word—construct a part of Bengaluru’s identity. At least, in my very uninformed, brand-new to Bengaluru opinion. Bengaluru is a city caught in the middle of tech-boom, leaving many richer than they were before and leaving many behind. It’s a fascinating, and at times, upsetting dichotomy.

About Kate Clark 7 Articles
Kate Clark is an intern at Citizen Matters. She tweets at @KateClarkTweets