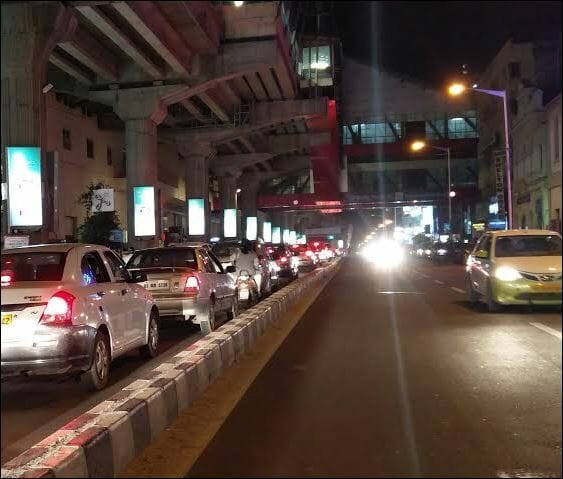 After finding out I would be coming to Bengaluru, an Indian city I knew just as the “Silicon Valley of India,” having grown up in Seattle, I became fascinated with the idea of comparing my hometown to B’luru. The differences between these two cities, 8,000 miles/13,000 kilometers apart, are stark (food, geography, language, ethnicity, weather, traditions, you name it). Finding the similarities, I thought, would be more of a challenge.

The questions I had in mind: do Bengalureans romanticise their pre-tech past as much as Seattleites do? Do they long for a time when young men, tech-badges in tow, weren’t found on every corner? How are tech-transplants/migrants perceived here? Would you ever spot an altercation between a long-time resident and a tech-transplant in a bar or shop like you might in Seattle? Or, are Bengalureans grateful for the tech-boom, which of course has brought hundreds of thousands of jobs to the city, much like it has in Seattle?

Unfortunately for me, being the millennial, 22-year-old baby that I am, I missed out on the often romanticised pre-tech Seattle. I can’t relate to most of the grunge, Kurt Cobain-era, sans-Starbucks on every corner-Seattle stories that many over the age of 30 regularly spout. I am exactly three weeks older than Amazon (founded in Seattle in 1994) — today, coincidentally, is Amazon’s 22nd birthday — so I can’t and won’t preach about Seattle’s good old days.

But much like a slightly younger sibling, I watched Amazon grow up. I watched it develop, little by little, until suddenly South Lake Union, one of Seattle’s neighborhoods, became Amazonia. I went to the Seattle-based University of Washington, whose computer science school can’t keep up with the demand and where it seems one of every three students wants to or does go to work at Amazon. I am one of many in a generation whose Seattle is in part defined by Amazon and the IT sector in general. Still, what do I really know about Seattle pre-tech? What do I know about the world pre-tech? Maybe nothing. But that’s ok, I have the Internet to help me out, and like many Seattleites, I have many friends whose favorite past-time is to hate on Amazon, to comment on the growing art vs. tech dichotomy in Seattle.

I don’t know the exact percentage of Bengalureans working in tech, but considering there are nearly 1,000, maybe more at this point, IT firms located here, you can imagine it’s a pretty big chunk. As of last year, Bengaluru, placed 15th on the Global Startup Ecosystem Ranking, (Seattle ranked 8th), and had the second fastest growing ecosystem and the youngest entrepreneurs, which suggests the city is likely to continue moving up that roster. Watch out, Seattle.

Seattle and Bengaluru are both tech cities. Two cities, depending on how you look at it, have either bore the brunt of the tech boom or have experienced significant economic growth because of it. They are two of just a handful of world cities that are now known for their contributions to tech. Two cities that people from all over their respective countries, and beyond, now move to, to land a job in the IT field. Seattle and B’luru have both experienced Amageddon, a term coined by Seattle-writer Jeff Reifman to denote the conflict between Amazon/IT and culture. How interesting for me that I have the opportunity to get to know both of these places.

So just how has ‘Amageddon’ similarly impacted each place?

In Seattle, long time residents are being forced out due to rising rents. Locals, including myself, have watched as high-rise apartments shot up in Capitol Hill, a neighborhood in Seattle known as an LGBT safe-space, an artist’s mecca—not a coder’s paradise. But many who have made Capitol Hill their home have had to leave, unable to match Amazon employees salaries, unable to pay the desired rents.

But gentrification isn’t the only problem. The wealth gap in the city is undoubtedly growing, and traffic (Bengalureans can relate, although Seattle doesn’t hold a candle to B’luru traffic) is getting worse by the day.

Amazon and Microsoft and the hundreds of small startups have attracted thousands of tech-transplants, but they have also hired locals. And they have put a lot of money into the Seattle economy (yes, as much as many Seattleites don’t want to admit it, many techies do shop local).

Amazon is Seattle’s favorite scapegoat, but tech companies can’t be blamed for all of Seattle’s problems.

The same can be said for Bengaluru. Although some of B’luru’s greatest problems, traffic for example, are a direct result of the massive population increase which, in turn, is a direct result of the tech-boom, much of their problems are more likely the result of political inaction and a lack of infrastructure necessary to support their growing population. You can’t really blame Amazon for all that.

So, do Bengalureans not involved in the tech scene long for the 90s’ and before, when the population, at 4,000,000, was less than half of what it is now? – See more at: http://bengaluru.citizenmatters.in/articles/bengaluru-and-seattle-two-cities-experiencing-amageddon#sthash.jUM6KlWL.dpuf

So, do the Bengalureans not involved in the tech scene, now long for the 90s’ and before, when the population, at 4,000,000, was less than half of what it is now? How do Bengalureans maintain a connection to their city’s past? To the B’luru before Microsoft? Before Amazon? Before it had one of the greatest startup ecosystems in the world?

A tale of two cities: Seattle and Bengaluru
Bengaluru and Seattle: sister cities or polar opposites?

About Kate Clark 7 Articles
Kate Clark is an intern at Citizen Matters. She tweets at @KateClarkTweets