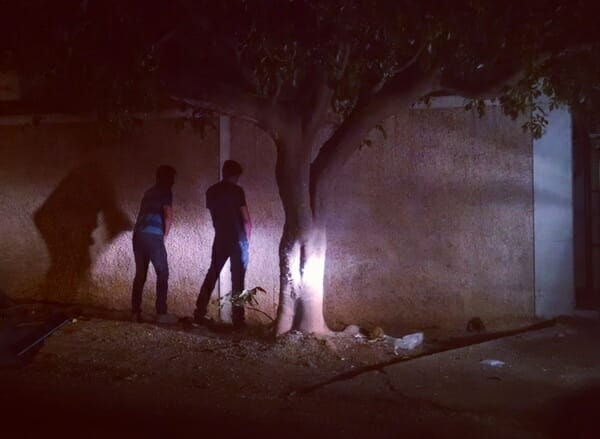 Public urination is common in Bengaluru. However, some people have no qualms about open defecation too. Pic: Ganga Madappa

“What happens in the bathroom stays in the bathroom” was the general consensus at my childhood household. Unless there was a health concern, no one discussed their bowel movements. Ever! It wasn’t until I moved away to college, at 18-years-old, and had to share three bathroom stalls with 40 other girls on my dorm floor that bathroom habits became public knowledge.

And then I arrived in Bengaluru.

I cannot remember the first time I encountered public urination in India. Perhaps I was unexpectedly assaulted by the pungent smell of urine baking in the sun on the concrete. Or maybe I had started my day early and witnessed street after street lined with men, standing and squatting, peeing on unsuspecting walls. Either way, I observed it and after a little while, I accepted it and moved on.

But then I had to deal with all of the poop. Dog poop. Cow poop. People poop.

I have three dogs at home, so the dog doodoos were easy. I had seen them before and become fairly skilled at identifying and avoiding them without much effort. Cow pies are a different story: big, generally round, and frequent. These land mines appear out of nowhere on crowded sidewalks and busy streets, making their presence known only when the bottom of your shoe is freshly coated in holy excrement. But, like the dog doodoos, the cow pies were easy to get past because, after all, cows are everywhere in the city and you can’t train a cow to use the bathroom somewhere more convenient.
I am however still grappling with the people poop.

Despite a few encounters with people poop over the past few months, I still have to compose my face and look away. The first time, my eyes widened, my mouth popped open, and I inhaled sharply in disbelief at the sight of a grown man, wearing a disinterested facial expression, lungi pulled up around his knees, facing the busy street, in broad daylight, defecating on the grass next to a petrol bunk. My thoughts went full circle: disbelief, embarrassment, confusion, perplexion, disgust, disbelief.

“My god! Is he doing what I think he is? Look away, look away.. Oh. Yep, he is, he’s pooping. God, that is so gross. But of all places, why is he doing it on the side of the road? Facing the street? So nasty. So gross… This is why everyone leaves their shoe’s outside.”

I know it is not uncommon to see men travelling half a kilometer or so outside of their villages, so they can relieve themselves on the roadside and continue on with their days. But both he and I were within city boundaries and it was the middle of rush hour.

Last week, on my journey home, I watched as a naked little toddler, popped a squat on the footpath and did her business as her mother stood by and watched only a few meters away from her playmates. When she was done, her mom fished through some garbage and, with a discarded rag, wiped it up and tossed it aside.

This time my eyes didn’t widen as much and my mouth didn’t pop open but my brain was, once again, boggled. I came to Bangalore with an open mind and I do my best to avoid passing judgement on things I don’t understand. However, this one is hard for me to wrap my head around.

It is no secret that there are more people in India with access to cellphones than to toilets, but that doesn’t ease the shock of witnessing public defecation in Bengaluru. The city is clearly lacking sanitation infrastructure; I have seen the e-toilets and experienced the hardship of finding a public toilet. The current population of Bangalore is almost 10 million and growing, so I have to ask, toilets elli??

An open letter to auto drivers from a foreign college student

About Eden Ezsak 0 Articles
Eden Ezsak is an undergraduate student at the University of Illinois studying Communication and Global Studies. She was an intern at Citizen Matters.