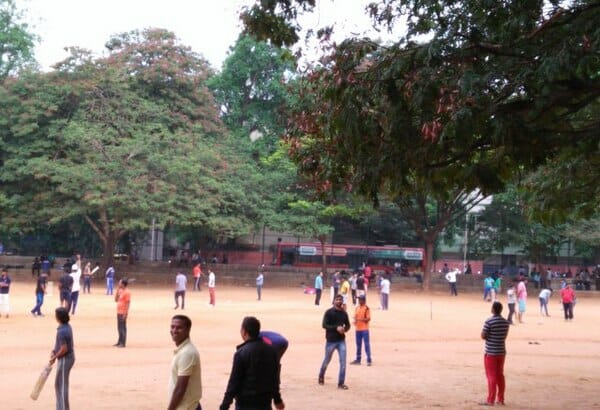 How do the cricketers keep a track of their team mates at the Malleshwaram ground? Pic: Rajesh Kallaje

Sports encompass every aspect of life in the United States. From the time we can walk we start playing at least one sport. Historically baseball has been America’s sporting pastime like soccer has been for much of the rest of the world.

There are two main sports that parents start their children out on the first, is teeball/baseball and the second is, surprisingly enough, is soccer. As American children get older those that continue to stay interested in athletics expand their horizons to football, basketball and track/field among other sports. I myself played basketball, baseball and volleyball throughout my childhood.

Before coming to Bengaluru I had only heard of cricket. From what little I knew, it seemed like a variation of baseball. As I rode through Bengaluru during my first two months here, everywhere I went I saw kids and young adults playing cricket in fields which often hosted multiple games. During this time my roommate was immensely interested in the sport and would take every chance to learn something about it. For my part I really didn’t take up an interest.

However, about three weeks ago my lack of interest quickly changed. I happened to be at Arbor Brewing Company during the India vs Pakistan cricket match. The atmosphere was perfect for a sporting event. It was something that I hadn’t come into contact with since I was at home. Beyond actually playing sports friends and family often get together to enjoy games on both the professional and collegiate level. Usually I am accustomed to joining in on events such as the Super Bowl, for the National Football League and March Madness, for college basketball, among other sporting events. However, because I am studying out of the country I haven’t been able to enjoy such events.

Arbor was packed with cricket fans eager for the game to start. At first my friends and I, being from the US, had little to no idea what the rules of the game were but we cheered along happily with everyone else. The more we watched and talked with the fans around us the more we started to understand the rules of the game. The sense of community that I felt during that game was the most at home that I had felt since coming to India.

While I really enjoy sports I have seen them as having little real contribution to society. I only saw them as large corporations taking the tax payer’s money while they made millions of dollars and the average american struggled to pay their bills. However, after my first experience with cricket I saw what a great community the sports world has built. It gives people from all backgrounds something to rally around and distract themselves from daily life. It gave me a sense of home and comfort that I haven’t felt in some months now.

About Noah Pilliongardnern 0 Articles
The author has not yet added any personal or biographical info to her or his author profile.