I like August. The weather is fine and the patriotic fervor is high in the air. I see people around me proudly sporting tri-colour pins. A far cry from the days when we were told to study hard, so that we can go “abroad” and chase certain coloured cards. Today we carry our Indian passports with pride. The “Made in India” label is cool and coveted. We support local art, local produce, local cuisine – just about anything local and native is ecofriendly and is in vogue. So, I think that a blog on “local native dogs” is would be just the thing for this month.

Dingo of Australia, The Canaan Dog of Isreal, Basenji of South Africa and Ridgeback of Thailand. Do any of these sound familiar? These are some native breeds across the world. These dogs evolved with minimal human interference in breeding. They are ancient, finding references in annals of our ancestors across the ancient world. They stand testament of our long-standing relationship with this species. For example, this website has several photographs of Neolithic hunting images that show Canaan dogs, some even appear to be on leashes. The modern world is slowly waking up to the exquisite beauty of these dogs and their unique characteristics shaped by nature, rather than by humans. Native ancient breeds are slowly finding due place in modern civilizations that are increasingly looking to ancient civilizations for guidance on nature-friendly holistic living.

There is a very special member of this elite club of dog breeds that I would like to draw your attention to. The striped girl in the picture is my girl – Tigger. The other girl is my friends’ – Mishka. Anyone recognize this breed? 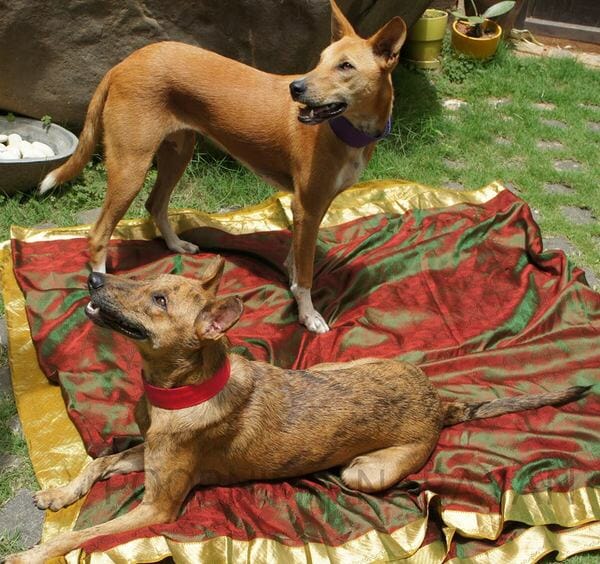 I can bet my money on the fact that you have met hundreds, if not thousands or millions of specimens of this breed. Yup! Our very own native! In the current age of expensive imported designer dogs, this underdog, pun intended, is actually a member of a rather exclusive club of ancient breeds of the world. So, I am thinking that this August, how about some recognition of and pride in our very own ancient breed of dog? Alright, so let’s start with some research, shall we…

Let’s start with the name of this breed. And that’s where we hit the breaks! Yup – the name. What is this breed called? There is no simple answer here. In fact, the answer is so convoluted that it can take up an entire blog entry and that’s exactly what this post is about.

Some call them Street Dogs or “Beedi Naayi”. A street dog is one that lives on the streets. Looking at the two dainty girls in the photo above, it’s evident they are not street dogs. If an irresponsible pet owner abandoned a Labrador to live on the streets, that would be a “Street Dog”. These two girls are not “Street Dogs”. So what are they?

Could we just call this dog The Indian Native Dog? We could, I suppose. But this is not the only native breed in India. Yup, that’s right! We do have several other breeds that I will be talking about in later blogs. So, while these two girls are native dogs of Indian origin, the term Indian Native Dog is a bit too generic.

Some call them “Mongrels”. A Mongrel is a mixed-breed dog that does not belong to an organizationally recognizable breed. So if you took a Great Dane and mixed it with a Shitzu (I don’t know how you might do that, but just humor me) you might have a mongrel. These two girls in the photos above are not mixed breeds. They are of a very specific breed of a clearly distinguishable origin.

This brings us to one viable name for this breed – INDog. Conservationist, Rajashree Khalap has spent years of effort in researching and defining this breed. She promotes the name INDog, that was coined by Colonel Gautam Das. So, that’s one name we could use for this breed.

Some call the breed Pariah or Pye dog. While the Wikipedia entry says that the term “Pariah” is not derogatory in this particular context, some people are still reluctant to use the term, as it’s generally an overloaded term. And most people who use the term don’t mean any disrespect. They are simply using the term that Wikipedia is offering to them.

My mind keeps going back to a conversation with a driver near my sisters house. When I adopted Tigger, this driver saw her and asked me if she was a “Naaty”. The term Naaty is used in the context of poultry to refer to free range, cage free, organic poultry. Understandably, the opposite of “Naaty Chicken” is “Farm Chicken”.  Taking his cue from there, the driver tells me “Naaty dogs are best madam. Farm dogs can get sick. I like Naaty dogs”. I could not stop laughing but also the terms really stuck in my head. So for now I am going to stick to this term – a local term for a local dog. I think that’s quite apt.

What do you think? What are some of the terms you have encountered and what are your thoughts on those terms or names?

About Sindhoor Pangal 14 Articles
Sindhoor is a canine behaviour consultant, Galen myotherapist, an independent ethology researcher, an engineer by qualification and an educator in Bengaluru, India. She is a TEDx speaker, the author of the book, Dog Knows and an independent ethology researcher studying the free-living dogs in India. Sindhoor is the founder of BHARCS. BHARCS offers a UK-accredited level 4 diploma on canine behaviour and ethology and boasts of students from all parts of India and across the globe. Sindhoor is also the country representative for Pet Dog Trainers of Europe (PDTE) and is currently pursuing her masters in Anthrozoology from Exeter University (UK).
Website