In my last blog, I wrote about how dogs are survivors. Ever so often I am reminded of this by remarkable stories around me. One such story is of Raja and Vasudev. 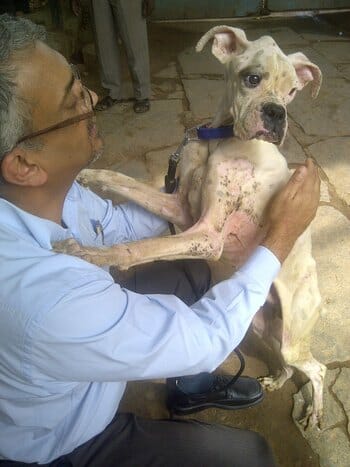 When we all first saw a picture of Raja on the internet it was hard to watch the picture. When I heard of someone adopting him I reached out to that man and thanked him. Thus started a friendship with a unique man and a very unique dog. Both have made a huge impression on me.

The love they share is one that reminds me of how beautiful our world. When writing about how dogs survive through all and emerge wagging their tail at the other end, I could not have featured Raja’s story. And who better to write it than Vasudev himself. So, dear friends, I present to you the story of two friends – Raja and Vasudev, as written by Vasudev Murthy.

I would not describe myself as a practical person. But somehow, this has suited me quite well. There are always some difficulties when I act on impulse but over a period of time, things even out and I never regret that I did something because my heart overruled my head.

Dogs have always entered my life with very little warning. They usually have a sad story behind them.

Rani was a beautiful Alsatian who had been used for breeding and discarded when she became old. She arrived as a bag of bones and I wept when I saw she couldn’t even lift herself up. She recovered very slowly and graced our lives for two years before she moved on. There was a divine beauty in her that made us feel small and humble. Then there was Nemo, who was born terribly distorted, with a twisted spine. He lived in a tray for four years. When he died, I felt I had too. Both of them came to us through friends at CUPA.

We have others. Jumble is a senior who was given away by a family that had moved from Delhi and couldn’t manage. Scotty was a little fellow found in a ditch. Zui came through a good friend’s prodding. Chunnu was an abused pug who landed up as a so-called foster. They all stayed.

Raja’s photo suddenly showed up on a Facebook page. There was something simply ghastly and revolting about his condition. There was a collection of skin and bones and it had been tied up. A collective scream of shock overwhelmed many boards. The photo was actually not a moment of cruelty as we learned later, but the effect was very stressful.

Like Rani and Nemo, here too, I had no choice. I could have been practical and looked away and hoped ‘someone’ would do ‘something’. It doesn’t work like that for me;

I called friends and consulted my family. Though it was agreed that the strain of many dogs at home was already telling on us, we simply couldn’t find a way to say no.

I reached the CUPA shelter and was introduced to a skeleton with an attitude, That was Raja, then without a name. He was a white boxer, someone said. It really didn’t matter; it just gave him a twist in his personality that made him special. All dogs are individuals, as those of us who have dealt with them know. He jumped into my car and we were off. He was not too happy with the bath and general attention but he was too weak to resist. 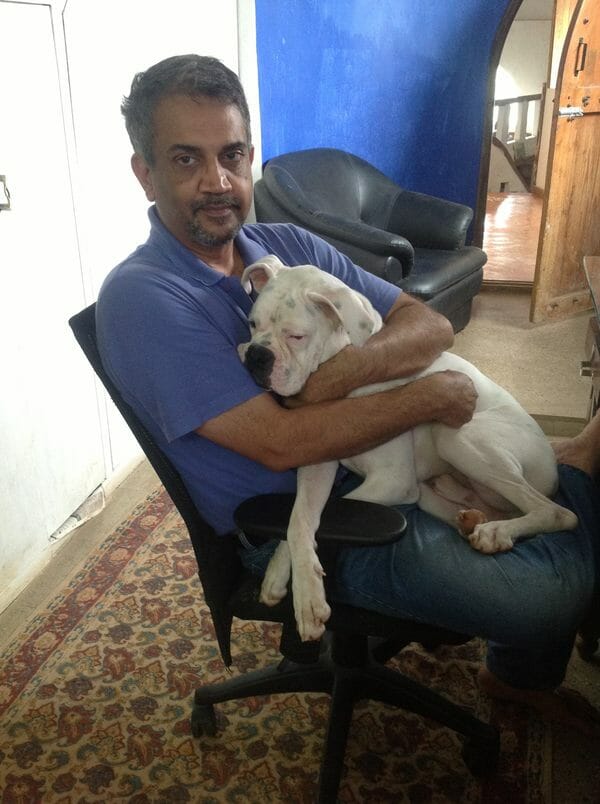 In Vasudev’s comforting arms Raja forgets his past

Over several weeks, he turned out to be a friendly and intelligent fellow. After a few days of rest and plenty of love, when he had time to develop some trust in us, he informed us that his name was Raja. Very apt, we felt.  As he grew in confidence and weight, his personality started emerging. Soon we realized that he was very clever, very athletic and very very hungry!  Who knows how much he had starved before he was found roaming the streets of Bangalore, frightened and hungry. Some good friends contributed a special diet and sent him plenty of goodies. A young man insisted on coming home to be introduced to Inspector Raja. A dog had touched the lives of others, simply by overcoming suffering and becoming himself.

Many months after he came on board, he has become the alpha male of the brood. With endless energy, a stomach that needs constant filling and a slight bullying tendency that emerges sometimes, Raja has established his territory. I am not strict and he knows it and so he manipulates me. I don’t mind, though I am firm when I know he needs a bath or has to be separated when he quarrels.  He has put on a lot of weight too, which is heartening, and all those who wept when they saw him first should feel reassured that he is okay now, free, unconstrained, with dog and human friends. And he is now in Goa, enjoying the beach and sun; I have moved here for a year.

As I type this, Raja has smuggled himself on my chair and made himself comfortable. He is a child and I believe in spoiling little children. That is me and at my age, I do not plan to change.

The passing away of a dog is an extremely painful event and many vow never to have another because they cannot face that grief again. That is understandable. But as human beings, can we find that reservoir in us to try to fill that hole in us by embracing the suffering of another innocent and voiceless, who responds to love and warmth? Rani and Nemo went away to another world and I remember them as you might, with watery eyes and a catch in the throat. But they would have agreed, for sure, that space should have been made for Raja and before him for the others.

My view is that we should reach out to the worst cases and love till it hurts. Pain and misery will never go away and our acts may seem irrelevant in a universe where suffering is endemic and cruelty is almost never punished. Animals bear the brunt of our distorted sense of power and superiority. While we are comfortable with dogs and cats as pets, and therefore feel a stronger sense of outrage when we hear cases of barbaric cruelty about them, the plight of other animals is no less intense. When will our sense of compassion extend beyond dogs and cats and envelope all living forms? Not in my lifetime, for sure. Perhaps, young reader, in yours.

Let love be extreme. Don’t be practical. So says Raja.

About Sindhoor Pangal 14 Articles
Sindhoor is a canine behaviour consultant, Galen myotherapist, an independent ethology researcher, an engineer by qualification and an educator in Bengaluru, India. She is a TEDx speaker, the author of the book, Dog Knows and an independent ethology researcher studying the free-living dogs in India. Sindhoor is the founder of BHARCS. BHARCS offers a UK-accredited level 4 diploma on canine behaviour and ethology and boasts of students from all parts of India and across the globe. Sindhoor is also the country representative for Pet Dog Trainers of Europe (PDTE) and is currently pursuing her masters in Anthrozoology from Exeter University (UK).
Website