ST Layout Bed, 9am on a Tuesday. In a vacant plot of land, street sweepers gather the fallen leaves and garbage on the streets into two piles. They set them on fire and go on with their business. Meanwhile, all the surrounding houses are getting smoked up with toxic fumes and the ambient air is getting significantly worse.

Burning leaves or any garbage is a forbidden practice in Bangalore and yet it remains a common way to dispose of garbage. Composting of leaf litter is an alternative whether it be local or at a composting plant; its mere existence should give enough reasons to the citizen to stand up against the practice of burning.

So what can you do? 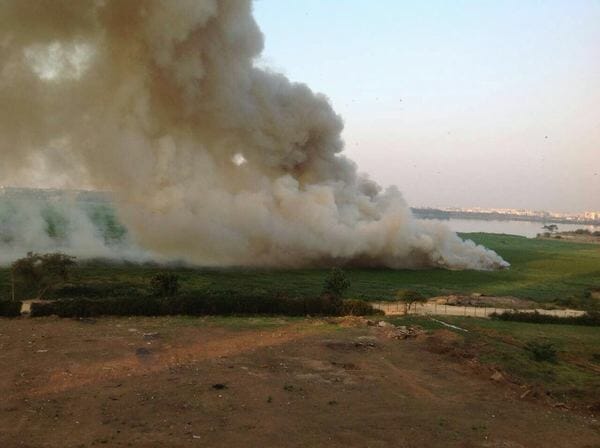 The most direct action one can take consists in calling up the people “in charge”. These could be your Resident Welfare Association (RWA) president, the BBMP, or by filing a complaint here.

Citizens have also access to more indirect means to pressure the authorities. For instance, Citizen Matters started a group on Mapunity data gathering platform to map black spots in Bengaluru. Pinpoint issues on the map at your own community level and you have solid material to prove your point! Burning of leaves by contractors happens in specific places that are deemed “acceptable” by the staff; by mapping them out you shed some light on it and create awareness.

Organise with fellow citizens: that’s a RWA’s purpose! If it is not ran to your liking, try to implement change anyways. Results will come around in a slow manner. There are many success stories of RWAs taking into control of their community’s waste management, and it really makes a difference.

Look at the bigger picture. Why aren’t leafs taken to the composting facility? Could be due to habit, ignorance, lack of alternatives, lack of equipment etc. One thing citizens can do is to check whether the numbers fit. For instance how many autos are being used to collect garbage in your area? One can check here for how many vehicles should be in each ward, but further research will be needed to understand the local dynamics; it may be useful to keep in mind that an auto tipper should be assigned around 750 households (figures vary according to, amongst other variables, the neighbourhood average income). Getting information on the waste contractor may be a good idea too. Is it empanelled? You can check here; if they aren’t, raise the issue in public or to officials. It is a start.

Changes most probably will not be implemented the consecutive day, nor will they in the following weeks. However, applying constant pressure with different means will create an environment where change will make more sense. There will eventually be a tipping point, such as when, after the sun has set, the number of mosquitos slowly increases to reach the tipping level that forces us inside.

Burning of leaves on vacant land is a mere symptom of the conundrum that is waste management in Bangalore, but one can start from the bottom-up to bring about changes on a wider scale. It is the disruptive noise of citizens that will unsettle the status quo in the local arena, and aggregated, this noise will bring direct or indirect support to those fighting in the policy arena. There are no impactless disruptions.

Don’t hesitate to add any data on water, Bangalore, or any Indian cities here so we can bring some transparency to the way our cities are managed.