On October 2nd, Prime Minister Modi announced Swachh Bharat Abhiyan or Mission Clean India. In his speech, he appealed to Indians to devote 100 hours every year towards the cause of cleanliness. He also stated, “It is our social responsibility as citizens of India to help fulfil Gandhiji’s vision of Clean India, by his 150th birth anniversary in 2019.”

Since then, the media has been reporting of clean-up drives across the country, involving bigwigs from the industry, celebrities, politicians, NGOs and what not, almost on a daily basis. Why, some politicians even arranged for garbage to be littered, so that they had something to sweep at the time of the photo-op.

It certainly is lovely that citizens are likely to consciously make an effort to keep their neighbourhoods clean and tidy, thanks to the campaign. But what about public spaces? While it is the responsibility of citizens to ensure they do not litter, what happens to the space if there is no one to question them when they do?

Some folks like yours truly, till sometime back, held on to garbage and threw it on spotting a garbage pile, and actually mentally cheered thinking, “Yes, I’m not littering.” True story! But if the garbage pile is not getting cleared, then am I not responsible for the litter on the streets?

In May 2014, one of our readers, Ananthraman S, a resident of Bilekhalli and a senior citizen, had commented on thr status of the footpath in front of Janardhana Towers on Bannerghatta Road: “The footpath is a nightmare and perhaps only the Gods are helping prevent walkers from tripping and getting hurt.” 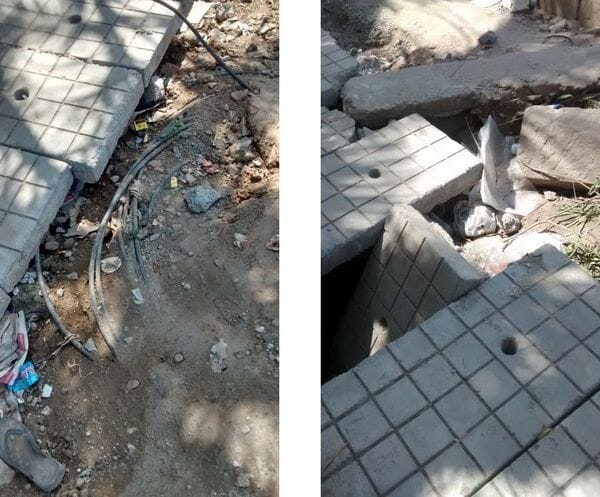 Again yesterday, six months after his post, he wrote to us stating that while BBMP had put the materials in place to repair the footpath, it has not been repaired. He asks: “The footpath in question is not even 100 feet long—with what efficiency is our government working?”

Across the city, there are several individuals and groups working towards fixing the little issues in their neighbourhood, many of them on a consistent basis. But the government machinery does need to do its bit too. A report in Bengaluru Mirror, spoke of traffic policemen filling up potholes to facilitate easy movement of traffic. Bangalore Rising had posted a layman’s guide to fixing potholes.

Consider The Ugly Indian’s effort in clearing the cluster of black spots in the Ejipura/Koramangala Passport office area. They termed this  ‘The Mother of All Spot Fixes’ and it was! Across 35 days and 7 spot fixes, more than 200+ citizens reclaimed around 600 feet of public space.

A before and after shot of The Mother of All Spot Fixes. Pic: The Ugly Indian

However, if you drive past the area where the cluster was today, you will find that the black spots have moved to the opposite side of the road. And you can’t really call them black spots anymore, it is so much more. As long as the pile remains, people are going to continue to dump more garbage here. So what happens now? Will the state government do something about it? Or is it waiting for a benevolent group of people to do its work?

I digress… Back to footpaths again, which was why I began ranting. I am currently convalescing from a bout of viral fever and am feeling positively arthritic. The newly-laid footpath in front of our office is a nightmare to climb. In some places the difference in height between the footpath and the road is much more than the recommended six inches. Why must the government wait for something drastic to happen before the problem is taken care of?

Or maybe, as Bavandar Gupha points out in his article, 21st century marvels in Bangalore, “…the BBMP has taken great pains to make sure that the citizens of Bangalore can keep fit in spite of their busy schedules. The footpaths have been designed so that anyone walking on them will get a good workout — there are wide holes, broken kerbstones, half-grown trees and street signs in the middle of the path — so as to give the person walking or running, excellent training for the steeplechase.”

About Ganga Madappa 5 Articles
Ganga Madappa was the Staff Reporter and the Community Manager at Citizen Matters. She loves cats and books and travel. She tweets at @pulicatmonster and blogs at Random Rambling.