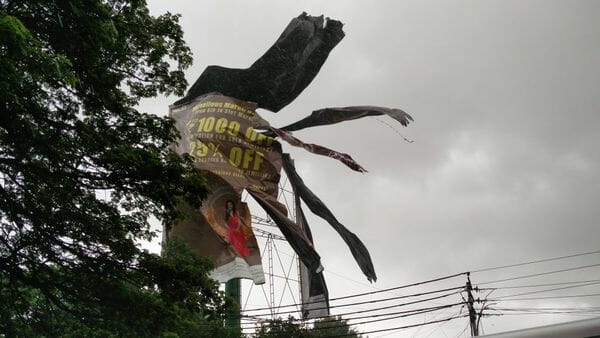 How many legal and illegal hoardings are there in Bengaluru and how to identify them? Looking for a complete location-specific data? Chances are that you will never ever get it.

In the month of April, when I started working on a series of stories on decoding illegal advertising hoardings in Bengaluru, I tried to gather information about legal and illegal hoardings in the city. Since the officials at Bruhat Bengaluru Mahanagara Palike (BBMP) have claimed to have conducted surveys on hoardings, I thought they would be able to provide me the required information.

Kumar Naik, who was the BBMP Commissioner till about two months back, had estimated the total number of hoardings in the city at 6,119. According to a survey conducted by 264 streetlight teams, the number of legal hoardings in the city is 2,476 and the rest are illegal, he had said. Another official at BBMP had informed me that as many as eight hoardings surveys had been conducted in BBMP so far.

But, I wasn’t interested in mere numbers. Numbers are often used by the authorities to deceive public, right? So, I was keen to get the list of hoardings with locations. If BBMP has indeed conducted the said surveys, they should be having the list of hoardings too, or so I thought. The location-specific list of hoardings, if we could get, could do wonders. The documents, if made public, would help citizens to identify the legal and illegal hoardings in Bengaluru and assist BBMP in social audit.

So, on April 25th, 2016 I filed an application under the Right to Information Act with the RTI cell at BBMP head office. Here is how one can file the RTI, it’s also embedded at the end of this piece.

But then it looks like BBMP is not really keen to process the RTI application, specially if it is pertaining to the department mired in controversies! Even after 30 days of filing the RTI, I did not get any reply from BBMP. I hadn’t got any letter from BBMP informing me about the application having transferred to the concerned authority. The deadline had crossed.

So in the first week of June, that is approximately 45 days of filing the application, I visited the RTI cell at BBMP head office to enquire about the status of my application. They informed me of having forwarded the application to Advertisement section on the same premises on April 27th, within two days of the date of filing application. Good enough.

I hopped onto the Advertisement section to check what was going wrong. I wasn’t new to the staff there. They knew me well, because of my frequent visits to the office for ad-related stories. Yet, when they opened the register to find out the status of the application, they seemed to be confused or pretended to be so. One person asked, “haven’t you got the reply yet?” The other said, “we have forwarded it to zonal joint commissioners.” When I checked the register, the status space was left blank. Then a clerical staff told me to wait for a day or two. He would ring me up and inform. Bizarre!

Letter after letter, but no info yet

But then what has transpired following my visit to BBMP’s advertisement office, is something that the civic body has to be ashamed of. The RTI replies that I have been receiving in the last few days, reflect the BBMP’s utter disregard to the RTI, and the sad state of affairs in the corporation.

While I was mulling over filing an appeal after my visit to the BBMP advertisement office, I got a reply from the Assistant Commissioner (Advertisement), Hari Shilpa, who is also the Public Information Officer. In the letter dated June 15th, the AC said, “as the information you have sought for comes under the jurisdiction of eight zonal commissioners, I am forwarding your application to the JCs. They are liable to send you the required information through registered post.”

This was a shocker. RTI Act clearly states that the officer who has received the application should transfer it to the concerned public authority within five days from the date of receiving. But, here is an officer, the Assistant Commissioner of Advertisement, who transferred my application to the JCs after 50 days of receiving it, i.e, after I visited her office and enquired about it.

When what we get is not what we ask for!

From the day I received AC’s reply, I have been getting the replies from joint commissioners too, one by one. The JC’s have acted swiftly, but guess what? They haven’t given me the information that I have asked for. In an act of shifting the responsibility, the Joint Commissioners who are actually responsible for advertisement-related matters in zonal level, have written to me saying the information is available with Assistant Revenue Officers of revenue pockets, hence they have forwarded the application to AROs.

The office of Joint Commissioner (West) has forwarded my application to 12 AROs in his zone and Dasarahalli JC has forwarded it to four AROs under his jurisdiction. As I wait for the replies from other zones, an Assistant Revenue Officer from a revenue pocket – Gandhi Nagar has been quick enough to send me the reply. Though the reply was quick, it again lacks the information that I had asked.

The ARO in his two line reply says: Of the 36 online applications that they have received for hoardings renewal this year, 13 of them have been accepted, 22 have been rejected and 1 application is pending. But what I had asked was the list of all legal advertisements with location. His reply has brought me to square one – the number game!

In that case, what has prevented the JCs from giving me the information? Why did the AC (Advertisement) make an inordinate delay in forwarding the RTI application? It’s time for an appeal with apellate authority, and I’m going for it!

Also see: How to file an RTI – a quick guide