Every year, the state AG (Accountant General) prepares audit reports on state government and some of its agencies. This year’s reports were presented on February 14th in the Karnataka legislative assembly. The same evening, CAG held a press conference to distribute the reports.

There are five reports this time. As usual, the reports are full of CAG’s exposes, all leading to loss of hundreds of crores of rupees. The reports come in a study bag, overall weighing somewhere around 7-8 kgs. A bagfull of exposes, you might call it. 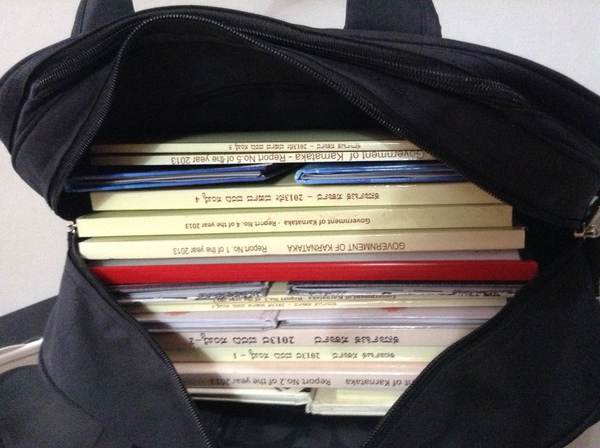 Except two smaller reports, others come in books with about 200 pages each. The CAG bag had the English and Kannada copies of all these books. Accompanying each book is a booklet with summary of all chapters. These booklets also come in both languages, and also have a soft copy of the entire report attached to them.

There is also a summary of all the reports, in a press brief, which the two AGs – who had prepared the reports – read out in the conference.

The conference started with one of the AGs, Anita Pattanayak, saying that the press had done a good job of covering CAG’s last two reports which had some major exposes. Unlike most government press conferences, this one was well-organised and data distributed properly. Many CAG officers were present, giving details and clarifications to reporters in between. The contact details of all those attended, was collected.

About Navya P K 0 Articles
Navya has 12 years of experience in journalism, covering development, urban governance and environment. She was earlier Senior Journalist, Citizen Matters, and Reporter, The New Indian Express. She has also freelanced for publications such as The News Minute, Factor Daily and India Together. Navya won the All India Environment Journalism Award, 2013, for her investigative series on the environmental violations of an upcoming SEZ in Bengaluru, published in Citizen Matters. She also won the PII-UNICEF fellowship in 2016 to report on child rights in Kerala and Tamil Nadu. Navya has an MA in Political Studies from Jawaharlal Nehru University, and a PG Diploma from the Asian College of Journalism.