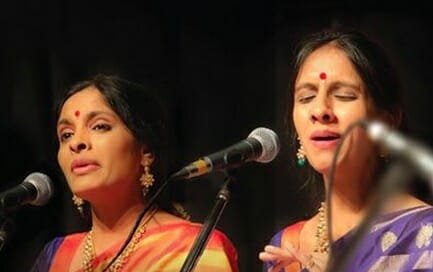 As the last quarter of the year rolls round, Devi or the Mother Goddess figures frequently in classical concerts. Bhoomija, a Bangalore-based trust that promotes performing arts presented a special concert Amma-for the mother by Carnatic vocalists Ranjani Gayatri.

So it was with a good deal of anticipation that I attended the Bhoomija concert with family in tow. Carnatic vocalists Ranjani and Gayatri are among the top duet vocalists of the genre who draw large audiences wherever they perform. They began the concert with the brisk pada varnam “Mathe Malayathwaja”, the composition of Harikesanallur Muthiah Bhagavathar in raga Khamas.

Prior to embarking on Shri Mathrubootham by Tyagaraja in raga Kannada, Gayatri briefly explained the context in which the song was set. “A mother enroute to attending her daughter’s childbirth is stranded by a river in spate. Her prayers are answered by Lord Shiva who assists the daughter in the form of her mother.” The singers emotively rendered the composition. This was followed by a raga alapana of Vasantha for the song “Seethamma Mayamma” with neraval and kalpana swaras for the pallavi.

The next piece was the evocative composition of Shyama Shastri in raga Kalyani, “Thalli ninnu nera” describing the greatness of Devi. The piece de resistance of the program was the RTP in raga Kapi ending in a ragamalika with kalpana swaras in ragas Sama, Kaanada, Amirkalyani and Chandrakauns. I only wish the singers had announced the lines of the Kannada pallavi (which had been composed specially for this event) before the RTP segment for greater clarity. The accompanists M.Rajeev (violin), Delhi Sairam (mridangam) and Purushotthaman (kanjira) played extremely well.

The nearly-full hall, flawless arrangements and announcement regarding the singers request to not record the performance all spoke well of Bhoomija’s professional handling of the event.

For readers who may not be that familiar with Ranjani and Gayatri here is a video that shows the vocalists singing a bhajan at another program.