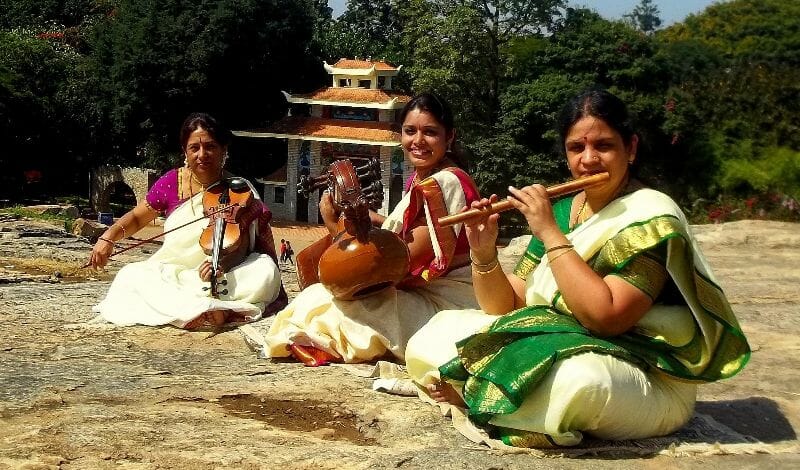 When three women – a flautist, a violinist and a vainika – got together to give a Carnatic concert a couple of years ago it was the beginning of a new journey. The venu-violin-veena concert team of Vani Manjunath, Prema Vivek and Shubha Santosh has been making waves in the Bangalore concert circuit. Here’s what they shared about their team dynamics and musical journey.

How was this idea of forming such a team conceived? How did it develop?

The concept of forming an all-women concert team was the brain child of mridanga vidwan H.S.Sudhindra of Bengalooru. The motivation for this idea stemmed from the fact that there was no permanent women’s team in the carnatic music scene. There were artists who had come together to give concerts on special occasions. But then they would not stay committed and there was no continuity in such an arrangement due to lack of understanding.

When and where did you all first perform as a team? How was the feedback?

Our debut concert was at East End Ram Mandira Bangalore two and half years ago. As it was our first performance, we didn’t know how it would turn out. We faced unexpected problems such as power outages several times during the concert. But it was an enjoyable experience playing together. We were also gratified by the positive feedback from the audience.

Each one of you have learnt compositions from your gurus in a particular style. How were you able to synchronise as a team?

When there is a concert coming up, we prepare a list of songs that we’d like to present and then get the script or notation for all the songs. Each of us play our own versions of the songs depending on how we’ve trained with our gurus. Together we select those sangatis (variation of a phrase in a song) that sound good to us at that point of time and then practise a common version of the songs to be presented at the concert. In case we decide to present a song for which we have no script, we listen to the rendition of that song by stalwarts such as M.S.Subbalakshmi, Semmangudi Srinivasa Iyer, D.K.Jayaraman and practise together.

Do you have a fixed practice schedule?

Not really. We meet whenever it is convenient for all of us.

Do you have any memorable concert experiences? Any incidents that have been learning experiences?

We had a couple of concerts during the Rama Navami music season last year. Neela mami (Vidushi Neela Ramgopal) attended our concert at Jayaram Seva Mandali and blessed us. After the concert she announced that we would be playing during the Sankranti music series hosted by her. We were also pleasantly surprised when the organizers of the same concert came up with the spontaneous decision to increase the concert remuneration after listening to us!

Do you innovate as you continue to perform? Where do you see yourselves as a team say a year or even three years down the road?

We definitely hope to innovate as we combine our individual styles, enhance each others playing techniques, and present concerts as a single unit. Vidwan H.S.Sudhindra has been instrumental in helping us understand our roles as team players. Our goal is to create a niche for ourselves in the carnatic music world.